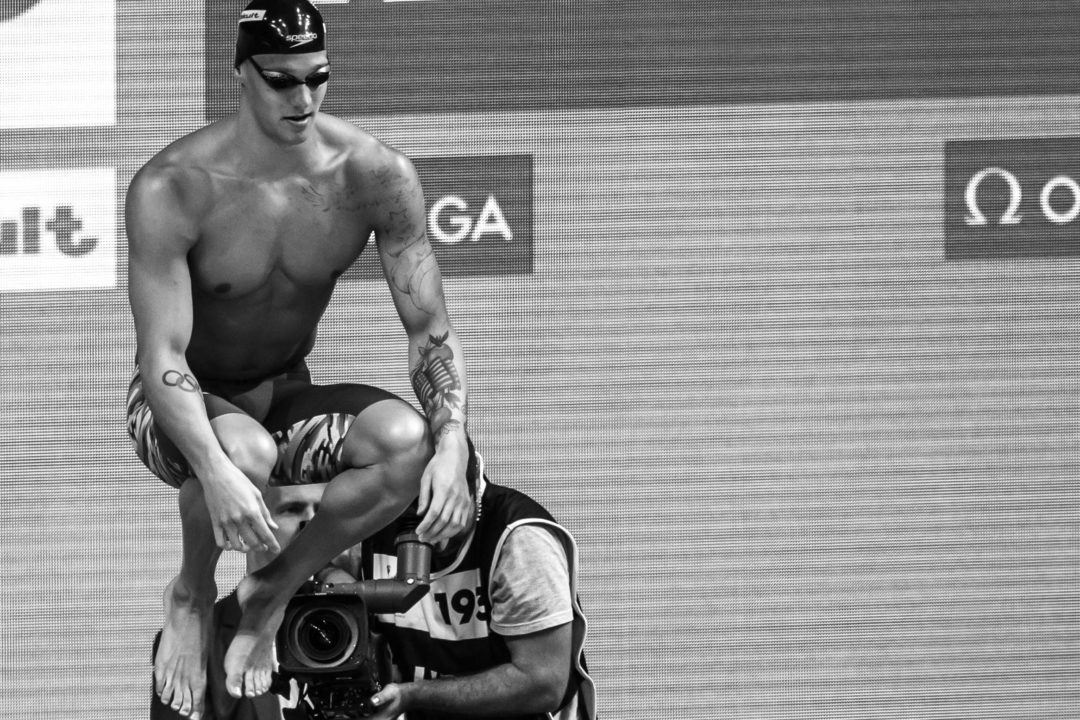 After breaking the eight-year-old 100 free American record leading off the 400 free relay on day 1, Caeleb Dressel did it once again in the final of the individual event, striking gold.

On day 4 he qualified 2nd through to the final in 47.66, and with the pressure on he didn’t flinch. Dressel was out two one-hundredths slower than his lead-off leg in 22.31, but stormed home in 24.86 to win the gold medal by a whopping seven tenths of a second in 47.17. He was the fastest man opening up, and only Australian Jack Cartwright (24.85), who placed 7th, came back faster.

He maintains his position as the 7th fastest performer in history, but gets on the board of top performances in history with the 10th fastest of all-time, and 3rd fastest post-2009.

Check out a comparison of Dressel’s splits in his two American record performances:

The 20-year-old Dressel wins his first ever individual World Championship medal, and gives the U.S. the 100 free World title for the first time since 2001 when Anthony Ervin won gold in Fukuoka.

Dressel will beat schooling in the 100 fly.. No joke

So I’m thinking a world record could realistically happen in the next few years, what do you all think???

why is so easy for women to broke the record, and yet so difficult for men to do so?

Because the lower the times are, the harder they are to beat. Especially sprint freestyles from the 2009 super suit era.

1
0
Reply
The Dressler
Reply to  lilaswimmer

It’s not ‘so easy’ let’s be real here. However, the men went from full body suits to jammers after 2009. The women, for obvious reasons, still wear fast suits that cover most of their bodies.

This is completely speculation, but olympic male swimmers are typically very muscular and dense, which doesn’t do too well in water. The super suits really helped with the buoyancy of the swimmers which would affect the men more than the women.

Yeah I’m thinking sub 48 will become more common, but sub 47.5 will be difficult and special when it happens. Sub 47 seemed super human to me for a really long time, but I’m starting to think it could be possible.

You could be right though, I don’t think it would be a surprise to have the current world record last through 2020.

That’s almost a full second improvement in one meet.

I want to put him in a supersuit just to see what happens..

I’m happy to eat my words that the winner would be a 47.5…congrats Dressel!

Scary because his turn could be cleaned up a little bit. Regardless, schooling is shaking in his boots for that fly

Broke the American record, the A relay kiss of death. Looks like he’s off it.

Okay, Mallory. We get it.

so cool to see young american sprinters doing so well. with him and Michael Andrew and Ryan Hoffer the US will be set for a long time!