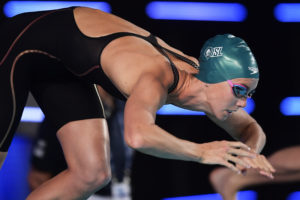 At NSW Open C’ships, the Aussies will look to respond to several world-leading times thrown down by Americans recently at the Pro Swim Series in Des Moines. 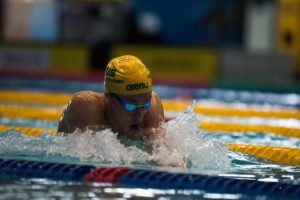 Cameron McEvoy
Born May 13, 1994 Cameron McEvoy is an Australian swimmer and 2012 and 2016 Olympian. McEvoy was born is from the Gold Coast, Australia and trains with QAS under Coach Richard Scarce. He is about six-feet tall, and specializes in the 100m and 200m freestyles.

McEvoy studies physics at Griffith University with the hopes of becoming an astronaut.

Australian success
In addition to his international successes, some of his Australian career highlights include winning the Australian nationals and breaking Ian Thorpe’s 100m freestyle record in the 16-year-old and 17-year-old age groups. He’s also the fifth-fastest 100m freestyle swimmers of all time.

Other passions
McEvoy is studying physics, his other passion – he’s most inspired by the 1965 Nobel prize-winning physicist, Richard Feynman. One of his biggest superstitions is making sure to knock on wood after saying something like, “I never get sick.” McEvoy is also a huge Los Angeles Lakers fan, and he once met Kobe Bryant and gave him a pair of “Australian swimmers”.

With more experience under his belt came more medals than two years before. McEvoy’s best performance came in the 100 meter freestyle where he finished with a silver, just 0.11 seconds behind gold. He added another silver as the freestyle leg of the 400 meter medley relay and a bronze as the lead off in the 800 meter freestyle relay. He also made the final in the 200 meter freestyle, finishing 8th.

McEvoy had a stunning week at the Australian Olympic trials, becoming the first Australian man to win the three sprint freestyle events at the same championship meet. He started out his record setting week touching at the exact same time as Thomas Fraser-holmes to win the 200 meter freestyle. Up next was his best event, 100 meter freestyle. He broke the Commonwealth and Australian record in 47.04 which placed him 3rd in the history books for the event. He managed gold again in the 50 meter freestyle finishing over half a second ahead of the rest of the field.

In his first final in Rio, McEvoy anchored the 400 meter freestyle relay bring the Australian team home to a bronze medal. His split of 47.00 was the second fastest of all the swimmers, behind only Nathan Adrian of the United States.

He picked up another bronze medal for his efforts in the heats of the 4×100 meter medley relay. He joined Mitch Larkin, Jake Packard and David Morgan to qualify for the finals, where McEvoy was replaced by Kyle Chamlers.

In Budapest, McEvoy finished 4th in the 100 meter freestyle in 47.92. He was just 0.03 behind France’s Mehdy Metella who won the bronze medal. He also took part in Australia’s 4×100 meter freestyle relay but the team was disqualified on Alexander Graham’s takeover from McEvoy.

McEvoy started his world championships in the men’s 4×100 free relay, where he led off in 48.44 to help Australia get a bronze medal.