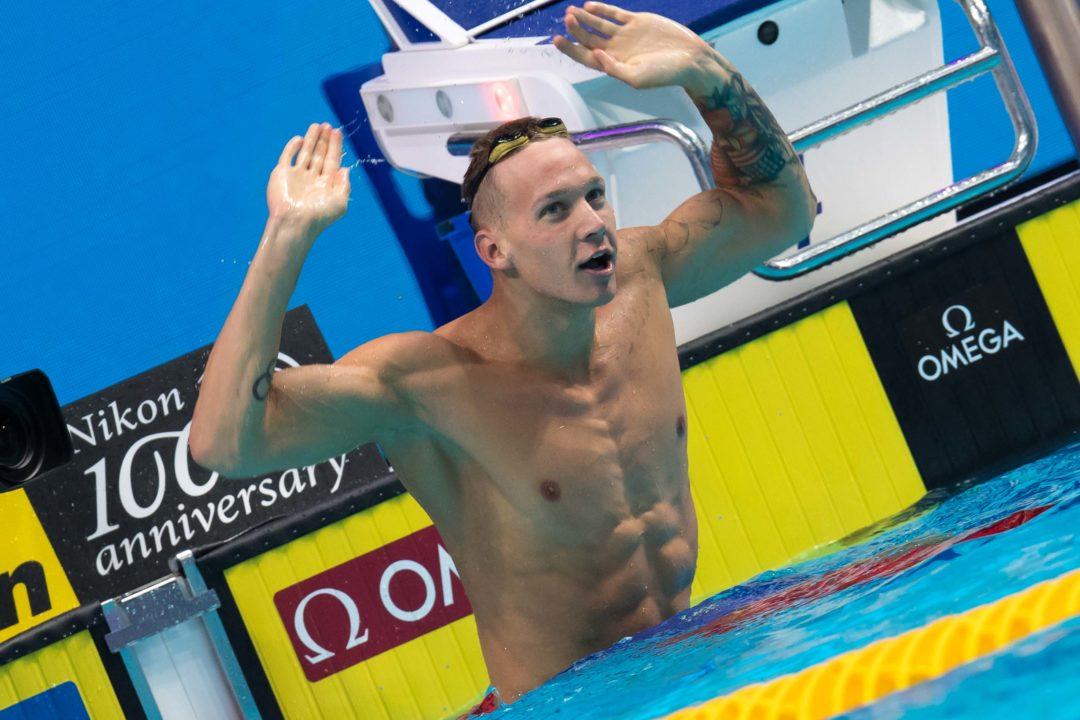 Caeleb Dressel won his third individual gold medal on Saturday night in the final of the men’s 50m freestyle. Dressel lowered the American Record of 21.29 he had set in semi-finals on Friday, touching in 21.15, the fastest performance in history in a textile suit. Touching second and third were Brazil’s Bruno Fratus (21.27) and Great Britain’s Ben Proud (21.43).

You're gonna wanna see this race from @caelebdressel in the 50m free! But don't blink or you might miss his gold medal winning performance! pic.twitter.com/xjHEqiucj0

Caeleb Dressel got his night started on the right foot, winning 50 free gold in a new American and Championship record time of 21.15. He’ll swim the 100 fly and mixed 400 free relays later tonight, and could become the first person to ever win three Worlds golds in one day.

The 20-year-old moved up into 3rd on the all-time top performers list, and #1 in terms of textile performers, passing Florent Manaudou‘s 21.19 from 2015.

If fratus can improve his start he can beat dressel

LOL, Ben proud has a nipple ring? What a queer.

Bruh everyone in the world thinks this now, you are not the first.

Caeleb Dressel..first man under 21 textile. You heard it here.

Bruh everyone in the world thinks this now, you are not the first.

Guess Flo will stick with handball.

Unreal. From the overhead shot at 5.3 seconds — 15 meters — Fratus was at Dressel’s hips. Fratus had Ervin-esque in-water speed.

Lol Dressel puts Phelps’s performance into perspective. This is pure quality from Dressel