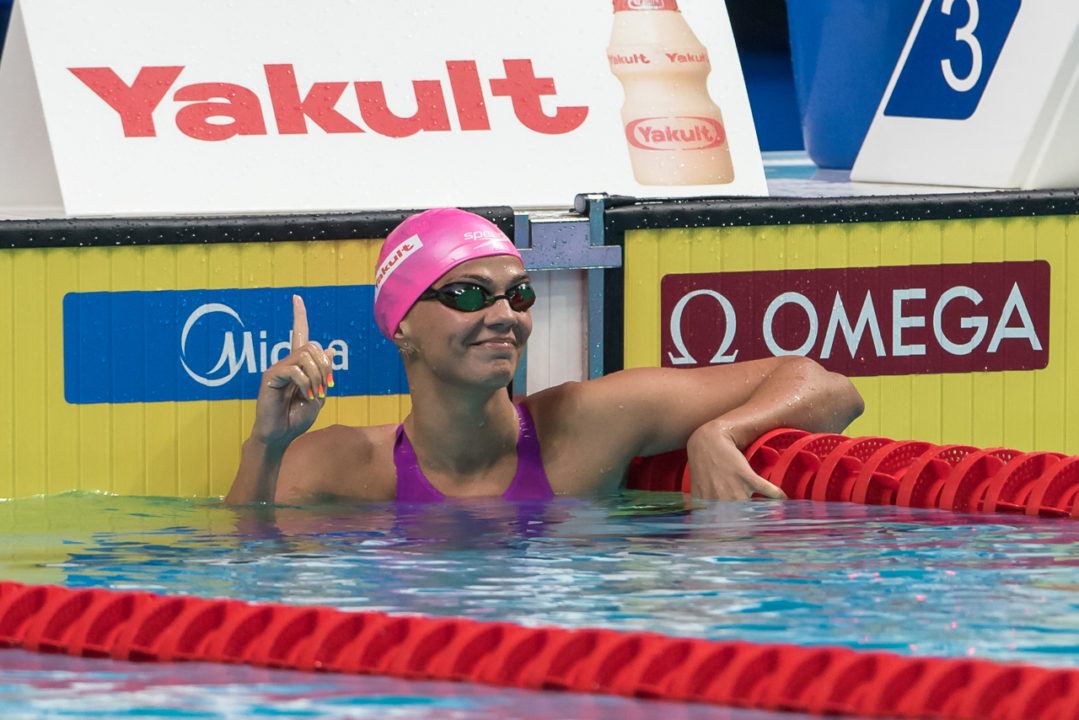 The rivalry between Lilly King and Yuliya Efimova is set to reach it's climax tomorrow in the women's 100 breast final. Current photo via Peter Sukenik/www.petersukenik.com

It all started in Rio.

A young, brash American competing in her first major championship meet saw something she didn’t like. And she spoke up about it.

In the first semi-final of the women’s 100 breast at the 2016 Olympic Games, Russian Yuliya Efimova touched 1st in a time of 1:05.72, and put her finger up signifying that she was number one.

Watching from the ready room, the top seed from prelims, 19-year-old Lilly King, saw Efimova’s gesture and mockingly did it back at her. She then went out, posted a time two one-hundredths faster than the Russian, and wagged her finger once again.

Was this just a competitive rivalry, or was there something more?

There was more. Prior to the Olympics, Efimova had tested positive for meldonium, a drug that increases blood flow in patients with ischemia, but it can also increase an athlete’s exercise capacity. That wasn’t her first offense either, as she was caught for 7-keto-DHEA in 2013, receiving a 13-month suspension and getting stripped of a few world records and medals.

After going through appeals and doing everything she could, Efimova was cleared to compete in Rio just a day prior to action beginning in the pool.

After the semi-final race, King spoke out about Efimova’s past. Asked about the ‘finger wag’, she responded: “You’ve been caught for drug cheating and you wave your finger number one, I’m just not a fan”.

On such a big, international stage, most swimmers would just quietly go about their business. But not King.

The next night in the final they lined up, side-by-side, for the final. King glanced Efimova’s way a few times prior to the start. Once in the water, the American dominated early. King led by nearly half a second at the 50 wall in 30.22, and only increased her lead the rest of the way winning in a new Olympic record time of 1:04.93. Efimova settled for silver in 1:05.50.

Now in Budapest, Efimova missed the world record by a hundredth in the semis, proceeding to wag her finger once again. Swimming in the second semi, King was a tick slower than Efimova’s 1:04.36, clocking 1:04.53 for another best time.

One year after the epic Olympic showdown, what’s in store for tomorrow? A year to simmer. A year to fester. A year for both swimmers to build their confidence. Could there be an actual face-to-face confrontation? I sure hope so. It would make for great television.

Whoever wins tomorrow, whatever happens, this race is going to be an instant classic.

Adding to the spice tomorrow will be the world record holder, Ruta Meilutyte, who has announced her return to the medal picture after finishing 7th in Rio. She was 1:05.06 in the semis, and will be joined by Katie Meili in the battle for (likely) the bronze medal.

OTHER NORTH AMERICAN ACTION ON DAY 2

After coming out of the gate with a three gold, four medal performance on day 1, the Americans continue to sit atop the medal standings after day 2. They added three medals, including two from first-time World Championship team members.

Kelsi Worrell re-lowered her best time in the women’s 100 fly to 56.37, winning the bronze medal. This is her second medal of the competition after winning gold on the 400 free relay yesterday.

In the women’s 200 IM, Madisyn Cox came through for the bronze medal in a time of 2:09.71, edging out teammate Melanie Margalis. Cox wins a medal in her only event of the competition.

The other American medal came from Kevin Cordes in the men’s 100 breast, as he touched for silver in 58.79. He lowered the American Record in the semi-finals down to 58.64. This is Cordes’ 5th World Championship medal, and the first for the U.S. in the men’s 100 breast in ten years. Brendan Hansen won gold back in 2007 in Melbourne.

The U.S. leads all countries with six medals. China sits 2nd on the table with 2 golds, while Australia has 3 medals but zero golds.

Canada had a second consecutive 4th place finish today from Penny Oleksiak in the women’s 100 fly. Masse should earn them their first medal tomorrow in the 100 back final.

Might be a good idea to place a metal detector outside the ready room….

My dog wagged his tail at me. Does he have beef? Should I be scared? ? ?

Lily needs to mature, enough with this nonsense!!!

OMG. I thought there was some real beef here? I thought maybe Lilly had clapped back at Efimova. Y’all need to stop and just let these girls race. Lol ?

The US has won 2 bronze medals (Worrell and Cox) for a total of 7 medals, not 6.

That extra bronze medal was donated to China, who exchanged two bronze medals for their 2nd gold medal at the Budapest trading post. #fakenews