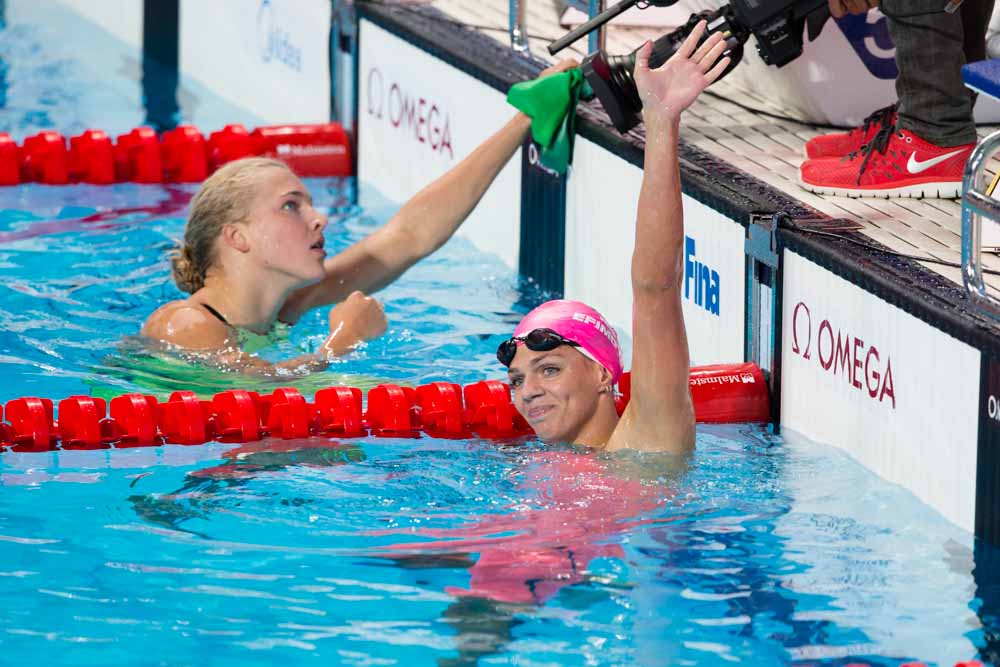 According to Russian Swimming Federation President Vladimir Salnikov, Yulia Efimova has been cleared to compete in the Rio de Janeiro Olympics. Current photo via Tim Binning/TheSwimPictures.com

According to Russian Swimming Federation President Vladimir Salnikov, the International Swimming Federation (FINA) has cleared four-time world champion Yulia Efimova along with four other Russian swimmers as a result of Efimova’s appeal to the Court for Arbitration of Sport.

Yesterday’s CAS decision was complicated (and it’s explored in further depth here). The CAS does not believe that the IOC has the right to put a blanket ban from the Olympics on all previously-sanctioned Russian dopers, and, with that in mind, it sent the decision back to the IOC.

And, according to Salnikov, the Russian Swimming Federation received a letter from the IOC confirming that she can take part in the Olympic Games. FINA has also stated their approval.

Also allowed to participate will be Anastasia Krapivina, Mikhail Dogaluk, Nataliya Lovtsova, and Daria Ustinova (a backstroker who just filed her own appeal with the CAS).

“”FINA said that it supports the rights of Efimova, Anastasia Krapivina, Mikhail Dovgaluk, Daria Ustinova and Nataliya Lovtsova to being allowed to take part in the Games and has sent its recommendation to CAS,” Salnikov told R-Sport.

If the decision pans out, Efimova, the bronze medalist in the 100 breast at the 2012 Olympic Games, will swim the prelims of the women’s 100 breast on Sunday.

I think she is cute and except for the fact she talks funny should be allowed to swim.

I am fully on board with the outrage about Efimova and I get it. However she did serve a 2 year ban already. But isn’t it a bit hypocritical to gang up on her while literally all news outlets including this site do not give Park Tae Hwan the proper coverage he deserves? The guy had testestorone INJECTED for crying out loud.

I hope she will get all the Tiger Eyes from other swimmers going at her in each race she does .

God damn it. This sucks. Anyone want to start a new swimming federation? It’s time to remove these corrupt scum who don’t protect the clean athletes.

Hey Maverick, she served her sentence and kept on cheating. She was assisted in this endeavor by those responsible for training her and testing her (and others) – those purported to being committed to insuring fair play. She and those of her ilk are not juicing up just before they compete. They’re doping for weeks and months so they can train harder and more effectively. They’re expert at hiding and disguising what they do. This is a conspiracy to cheat those who play fair out of their chance for those unforgettable moments that so many dream for years of achieving – maybe an Olympic win; maybe a place on the awards podium. I hate the injustice and the corruption. Doesn’t… Read more »

Have you swam in college or at a national level meet

not changing my pick ’em picks as my own little form of protest.

There is nothing we can do, so I’m not going to waste time complaining. But I will say this: Normally I always hope that everyone from every country swims their best (and that my favorite’s best is better than all the others’ best). In this case, there is a slight caveat: I will hope that Efimova and any of the others’ conscience will guide them–if they are innocent, then like anyone else, may they swim their best. But if deep down if any tiny part of them knows, or thinks, that they are guilty, even subconsciously, then I hope that tiny part grows and festers and that the guilt consumes them to the point that it eats them alive and… Read more »