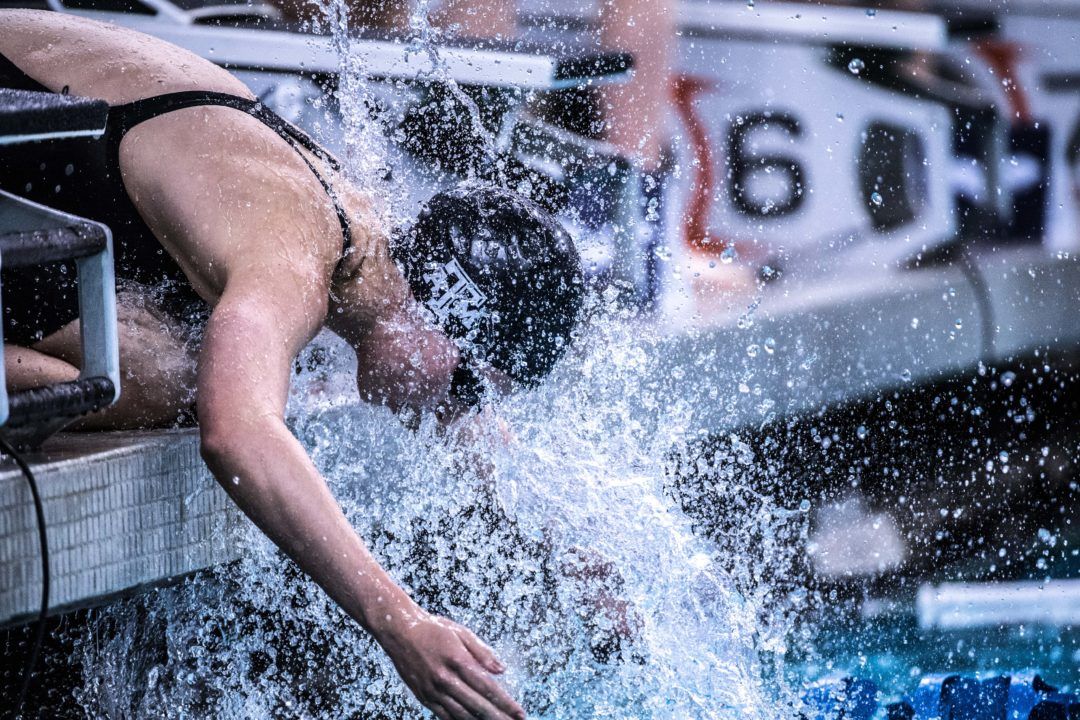 Canadian Sydney Pickrem mysteriously got out of the water after 50m of butterfly in the women's 200 IM final. Archive photo via Mike Lewis/Ola Vista Photography

Canada’s Sydney Pickrem was a prime medal contender heading into the women’s 200 IM final on day 2 in Budapest. Fresh off a Canadian National Record in the semi-finals, Pickrem was seeded 3rd behind two-time defending champion Katinka Hosszu and American Melanie Margalis.

Hosszu was almost a certainty to win on her home soil, but the minor medals were largely up for grabs.

On the fly leg Pickrem was clearly in 8th position, but that wasn’t a surprise as she’s much stronger on the other three strokes. She was the slowest of the eight finalists in the semis on the fly leg as well.

However, after finishing 50 metres, Pickrem stopped swimming. She hit the wall, and proceeded to get out of the pool. Watch a video via Radio-Canada Sports on Twitter:

Hosszu went onto win gold in 2:07.00, much to the delight of the home crowd. Japan’s Yui Ohashi won silver from lane 8, registering a new national record in 2:07.91. American Madisyn Cox won bronze.

Swimming Canada has tweeted out saying Pickrem is fine and working with Team Canada staff & coaches.

Sydney is fine and working with Team Canada staff & coaches. Thanks to all who have expressed concern.

We have reached out to Swimming Canada and Texas A&M for an official word on the incident, but have not heard back.

Update: According to Anson Henry on Twitter, Pickrem ‘caught water’ at the turn (aka swallowed water), which made her unable to continue.

For those wondering about @sydneypickrem, she caught some water on the turn at 50m could not continue. She is fine tho. #FINABudapest2017

Give Sydney a break, that girl is a dedicated swimmer and trained practically her whole life for theses special moments, maybe she had some mental health issues going on and is embaressed or too proud to disclose this….Give her a BREAK

The fact that this so rarely happens obviously means it was serious enough to stop. Who knows, maybe she wanted to keep going and would have tried to right herself at the wall but kept hacking once there. Sh*t happens to great athletes once in a while…period. I agree it will probably not happen to her or anyone else in that scenario for a long time.

Those comparing swallowing vs inhaling and saying there’s no difference please post a video of yourself with a 200bpm heart rate, drink a 1/2 glass of water then inhale the rest and tell me it’s the same… if you are able to talk/ breath of course.

You guys are missing the whole point lol. Like she is a world class swimmer, don’t you think whatever happened just have been serious enough to quit like that? You guys talking like she’s not tough when she is one of the best in the world smdh

Very weak and disappointing to see

Lots of keyboard warriors on this post. Assuming she breathed in water and not swallowed it … I don’t think you guys understand. When you breath in water, you feel like your throat is closing. Every breath you take feels like your last one, it gets harder and harder to get air in until your throat opens up again. It’s scary, we all make mistakes. It can catch us off guard even if we’re at “that level”. You guys act like you’ve never made a mistake you’d never expect to make SMH.

Everyone saying she’s soft, I hope you get waterboarded.

Swallowing water sucks but you can go on and I’m sure if that is what happened she would have. I’ve taken a breath of water in during practice at the flags and wasn’t able to make it to the wall without stopping. They are not the same thing. She is a world class swimmer. To assume she climbed out for any reason other than having no other choice is arrogant as heck. You have no idea what it felt like and with that comment I would assume it has never happened to you. That was one of the scariest moments I’ve had in a pool. It took me several minutes to recover. She’s a tough woman. She felt she had… Read more »

I swear some of you who say you swim or swam I have to question your validity to that claim. If she did take in water on a breath it isn’t something you just power through like a tough guy. Next time your choking on a hot dog, really choking, get up and run five miles before dislodging it. If your a winner you’ll be able to tuff it out.