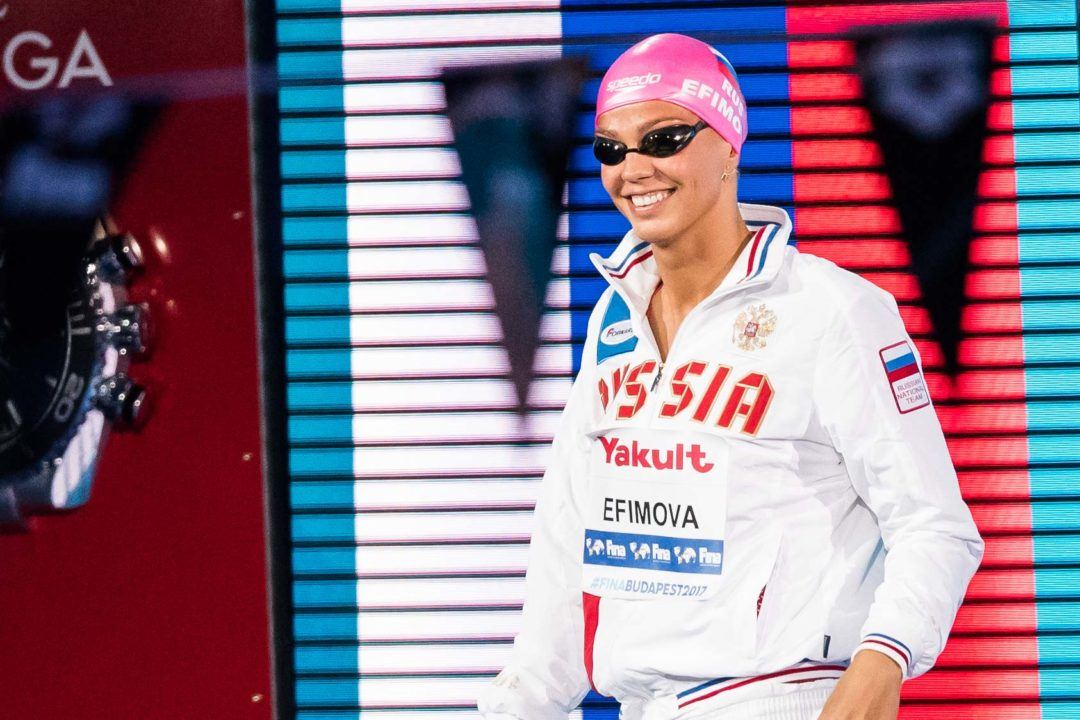 Yuliya Efimova missed the world record by 0.01 in the semi-finals of the women's 100 breast. Current photo via Mike Lewis/Ola Vista Photography

Controversial Russian Yuliya Efimova produced the second fastest swim in the history of the women’s 100 breast during the 2nd finals session in Budapest, clocking in at 1:04.36 in the first semi-final. The world record currently stands at 1:04.35, set by Lithuanian Ruta Meilutyte at the 2013 Championships in Barcelona.

Efimova, who had an ongoing feud with American Lilly King last summer in Rio amid her own doping controversy, mockingly wagged her finger after the swim. The finger wag became famous when Efimova did it in semi 1, and then King mockingly did it in the 2nd semi at the Olympics, after she went a faster time.

Meilutyte, who was off in Rio placing 7th, announces her return to the top tier in this event qualifying 3rd behind the two polarizing figures in 1:05.06. Katie Meili qualified 4th overall in 1:05.48, and the Rio bronze medalist will battle the world record holder for the 3rd place medal once again in the final.

Well I do know that after the Olympics her coach was really mad at her for her classless behavior. It is not a way to represent the US, like Nathan Adrian and Simone Manuel for example have. They were such good sportsmen.

and Yuliya was too actually! She shook Lilly Kings hand and King looked disgusted.

Poor sportsmanship is not impressive.

I despise cheaters but also abhor poor behavior. I felt Lilly’s initial finger wag was an exhibition of poor sportsmanship and feel the same about Efimova’s return of the gesture

In my opinion, having a little fun like this makes the sport more interesting and motivates both sides. Don’t take it so seriously

Won’t somebody please think of the children??

Well, whatever but both my swimmer kids were watching the Olympics and saw an American do something they felt was wrong. It didn’t seem lighthearted or jokingly done. Athletes are there to compete and represent not to judge. That’s what we have governing bodies to do. I stand by it, poor sportsmanship is just not ok

Swimming needs more of this

If Lilly beats her tomorrow she should wag the finger back at her and then give her a nose boop.

What a classy woman!

Would love your reaction to 1. Lily King and 2. Michael Phelps (or any male swimmer) doing this same exact thing.

Lilly King can be the exact example of classless.

I have never wanted someone to fail more. Efimova competing is an insult to clean athletes everywhere. FINA has repeatedly shown that it’s only interest is for its members to gain wealth and stay in power way longer than they should. Efimova is not even a debatable case of a person using PEDs to cheat she was caught with DHEA which is a pretty blatant and obvious offense and meladonium which apparently was used to help all Russian swimmers avoid heart problems, Funny Chalmers and Soni were never tested positive they actually had heart issues (although soni was before the ban) or any other major American or Australian was caught taking the drug. It wasn’t against the rules but it… Read more »

you don’t know anything. She could be doing it on purpose or she could have made a mistake when she moved to America trusting in the wrong people *a gnc employee* thinking they were knowledgeable. Besides that offense she’s skated on the line of the rules and I don’t think she should be shamed for it. You’re choosing to pick and choose the information of her career to your liking to bash her.

what do you think about other dopers at Worlds – Sun, Park, Cielo, etc.? there seems to be a lot of rage against Efimova but not towards the others.

I dislike them too. I’m not really a fan of dopers I feel with some PEDS it should be a one and done policy meladonium was honestly not a huge deal it just confirmed a lot of people’s suspicions Efimova was riding a fine line even after getting caught. Other athletes are probably riding that line but most of them haven’t been caught taking an anabolic steroid. And with the Efimova hate yeah I may dislike her more than some other dopers but a lot of that probably stems from my dissatisfaction with Russia’s state sponsored doping. There are plenty of clean Athletes in Russia, good people with great integrity but when you’re getting pressured so hard by a toxic… Read more »

By placing the responsibility at Russia’s door, you forget that for most of her time she lived and trained in US, subject to US controls. She never spent enough time in Russia to be subject to any massive conspiracy.

However if you want a massive conspiracy look outside swimming to USA cycling.

bu they only sponsored the track and field team, Efimova doesn’t even live in Russia, nor does she train with them. She trains with her dad all across the world for Efimova team. And for a while she trained at Long Beach City College, so if that’s Russia to you, ok.

I Think as a general rule You can assume I dislike dopers regardless of their nationality.

She was always rude to Efimova. At USC all she had were snippy comments. It’s not ok, and even when i met Jessica she never seemed that nice and genuine. I honestly think she is fake. When i met Yuliya she was so kind and open and acted as if i was her friend for years. But Jessica treated me like a lower class citizen.

Because the others are not easy targets like Efimova is. Efimova is on team russia so its easy for people to blame her. But she doesnt even live in russia so yall can be dumb sometimes

Again… And again…. People commenting because they dont do their research. the first mistake Yuliya made was true, and honestly a mistake, but either way, she took her penalty. There are HUNDREDS of american athletes who tested positive for meldonium because the people tested too early. So everyone’s ban got lifted. There is a difference between testing early, and doping. I agree with competing clean and standing up to dopers, but Efimova is a unique case, and i stood up for this case, before In knew her.

and i now this to be true because i have heard the story from her friends and family, and REAL articles. I appreciate swim swam because they give you the news whether true or fake, it doesn’t give too much info, but it gives you the point.