11 Swimmers Who Went Hard on Halloween 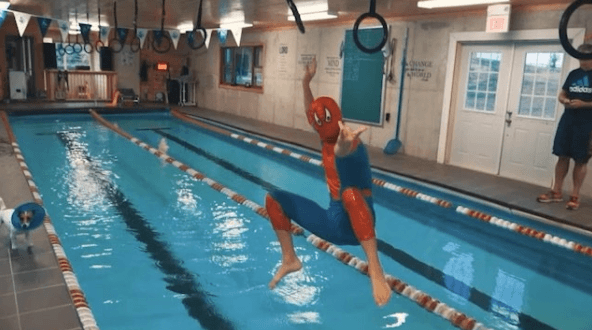 Though most of us don't end up getting the night off practice, these 11 swimmers (or swim teams) still found a way to go hard this Halloween.  Current photo via @swimmermichael Instagram

The overflowing competitive spirit and the extra burst of creativity that comes from spending most of your life underwater means that swimmers don’t mess around when it comes to holidays. Though most of us don’t end up getting the night off practice, and our coaches sure don’t want us to go into a candy coma, these 10 swimmers (or swim teams) still found a way to go hard this Halloween.

Pretty sure the ghost of David Bowie won Halloween this year. pic.twitter.com/BBHjxwsnTo

David Bowie changed the music world forever. Lilly King has made her mark as the fastest women’s breaststroker in history. Both can rock a blazer. Apt comparison.

HAPPY HALLOWEEN from one ANGRY BIRD ??? (you'd be angry too if your human dressed you up in a ridiculous costume ?) #angrybird pic.twitter.com/15YNYRwbeG

The #Hoyas were in the Halloween spirit at their Monday morning lift. #HoyaSaxa pic.twitter.com/DsuWkypGBk

I mean, dryland is difficult enough in gym shorts.

Michael Chadwick and Lia Neal rock bowties-on-a-stick, Leah Smith is an adorable cat, and Tom Shields is a leaf… face?

Ahh… the old chop off your teammate’s head for a photo op. #doitforthegram

There is a whole game here. You lose points for putting someone else’s snorkel in your mouth.

The Coast Guard Blue Dolphins are clearly skilled in pumpkin carving, but I’m even more impressed that none of their ten pumpkins are triangle-eyed smiley faces. It’s strength all the way down the roster.

Since the Dothraki are supposed to be terrified of water, Caeleb-Dressel-Khal-Drogo would automatically overcome many of the Game of Thrones character’s biggest weaknesses, thus allowing him to take over all of Essos and the Seven Kingdoms. It is known.

And while Caeleb Dressel is busy leading the Dothraki into combat, Patrick Furbay can grab his spot at the University of Florida.

(Update) 11. Michael Andrew Is So Intense We Change the List from 10 to 11 Swimmers

The moment we hit “publish” on this article, Michael Andrew posted this absolute masterpiece. Though Molly Hannis won Halloweekend, Michael Andrew is the hero of Halloween 2k17.

LOVE it MA!! The dog is totally awesome too!!

How is Michael Andrew swimming in a costume race specific training?

I get that was a joke

I know he’s generally pretty polarizing, but I hope we can all at least come together and agree that Michael Andrew’s dog running around on deck while wearing a cone is fantastic.

It really was lol

Why is he polarizing?

aw, you must be new here.

Just visit the comments under any post that mentions him. Doesn’t matter if he set a new PR or pulled a Pickrem and got out of the pool after swimming half a race, people will have OPINIONS.

Sure, every situation is different. It was just what I could think of as a worst-possible race for him.

I totally understand, but we’ve known about him forever and he’s 18. He’s been a kid for the whole time we’ve known of him, and he still kind of is a kid. He’s not the next Michael Phelps, but he wasn’t self proclaimed. He is a phenomenal swimmer and he probably will make the next Olympics in some capacity now that he’ll be a little older. I just don’t understand why this community hates the kid

I don’t think he will make it IMO. It’s because he doesn’t train with a team and his dad is his coach

Didn’t stop lezak! The kid is 18. Most male Olympians are a few years older when they start to really progress to elite