2021 Swammy Awards: US Female Swimmer of the Year, Katie Ledecky 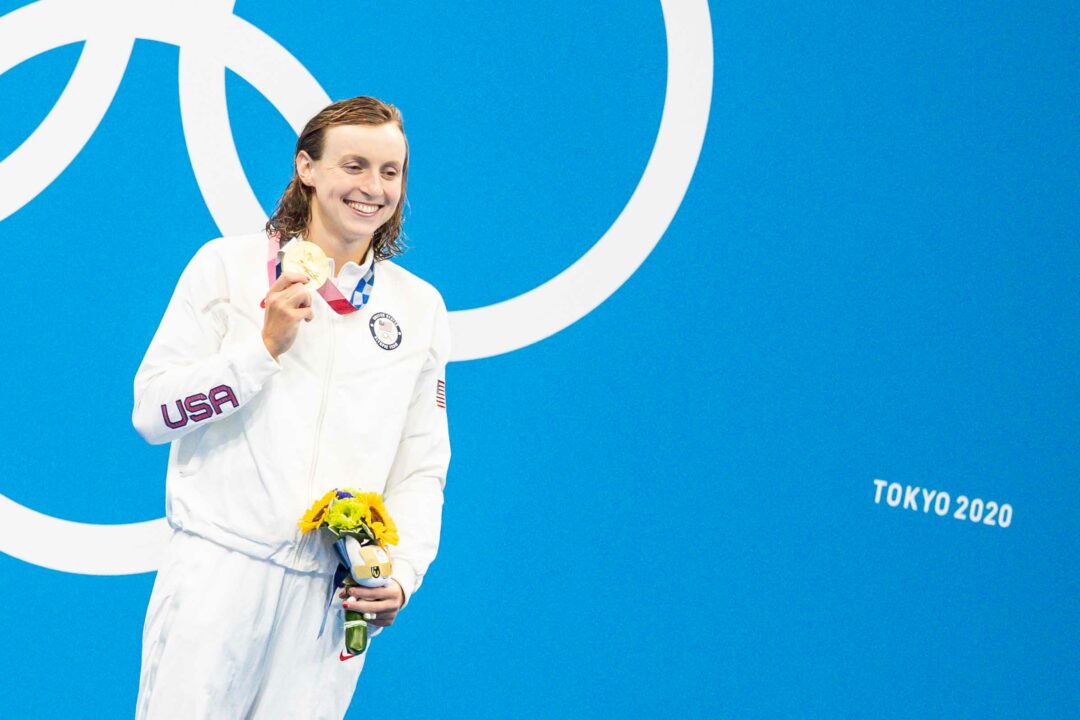 After a two-year hiatus from winning this award, Katie Ledecky is once again the winner of the Swammy for US Female Swimmer of the Year.  Archive photo via Jack Spitser/Spitser Photography

After a two-year hiatus from winning this award, Katie Ledecky is once again the winner of the Swammy for US Female Swimmer of the Year.

Ledecky certainly wasn’t uncontested in this category, facing a strong Olympic performance from Lydia Jacoby, a dominant age-group season from Torri Huske, and a World Record-breaking short course season from Kelsi Dahlia. Ultimately, however, Ledecky proved to be one of the United States’ most valuable Olympic performers, taking home two golds and two silvers in Tokyo. She was the only US swimmer on the women’s side to win two individual events, joining Caeleb Dressel and Bobby Finke as the only US swimmers to win multiple individual events at the Games.

Ledecky’s third Olympic Games did not start off flawlessly, as she lost her first race in a tight battle with Australian rival Ariarne Titmus. Going into the event, Ledecky had never lost an individual race at the Olympic Games. However, in the 400 freestyle, Titmus proved a formidable opponent, as the two posted some of the fastest performances in history in the event. Titmus’ time of 3:56.69 nearly broke Ledecky’s own world record of 3:56.46, while Ledecky placed second in a blistering 3:57.36. Despite losing out on the gold medal, Ledecky’s time still marked the second-fastest performance of her career, having only been faster in 2016.

Following her battle with Titmus in the 400 freestyle, Ledecky easily bested the field in the inaugural edition of the 1500 freestyle at the Olympics, setting the first Olympic record in the event. Ledecky’s time of 15:37.34 bested runner up Erica Sullivan by over 4 seconds, despite being off of her own world record of 15:20.28. Ledecky also managed to pick up a silver medal anchoring the US women’s 4×200 freestyle relay with a blistering 1:53.76 split, surpassing the Australian team in the process. Even with a second-place finish, the American contingent managed to dip under the former world record set by China in 2009 during the super-suit era.

In her final race of the competition, Ledecky once again swam head-to-head against Titmus, getting her hand to the wall first this time in the women’s 800 freestyle. Ledecky held off a late charge by Titmus to touch in a time of 8:12.79, a second ahead of her Australian rival. With her gold medal performance, Ledecky became only the third woman ever to three-peat in an event at the Olympic Games and with her 7 total gold medals across all 3 Olympics she’s competed in, Ledecky became the most decorated female swimmer in Olympic history.

What are the 5 WRs that Dahlia has?

Four of them are relays while only one of Sjostrom’s is a relay.

vs sjostrom’s 4 individual LCM WRs plus w4x50 medley SCM. the first 2 I listed are really the only WRs that matter (arguably the 4×100 SCM too, but she’s the weak link on the lcm wr), but dahlia obviously benefitted hugely from being an american sprinter, so it really isn’t fair to say she’s on sarah’s level. (although I do remember someone being pretty quick to change sjostrom pic to dahlia on wikipedia’s wr listing, which has since been reverted and rightly so)

which reminds me of a thought I had a few months ago. until 1964, each swimmer could… Read more »

0
0
Reply
The condors were robbed

Not her best year, but still wins 2 golds, wins a silver with her 2nd best ever time, only beaten by someone who pushed herself to Ledecky’s level.

She is the GOAT.

Should have been Regan Smith’s year for Olympic gold, but it didn’t pan out that way.

Regan swam a great 200 fly in Tokyo though. I loved her quote after the race. “I usually die at the end of that race. But I told myself “Not today!”

Change it up a bit. Tbh Dahlia deserves some type of award.

Gold medal where? It is an an Olympic year bub.

I didn’t say for this award

Katie Grimes will beat her in the 800 and 1500 free for a decade at least. Don’t worry about that.

Forget about the 200 and 400. Titmus and Mcintosh are built different.

cry about it. she’s been (way) better than the rest of the world in at least one (for the majority of the time 3) event(s) for 9 years, none of the other swimmers u mentioned have done that or will likely do that in the next decade. hence the GOAT label 🙄🙄

Ariarne will smash your Kathleen Genevieve Lechoker next May. At least 2 body lenghts.🤷‍♂️🤷‍♂️

Getting run down is Ledecky‘s new routine 🤣🤣

Swimfan I know it’s you