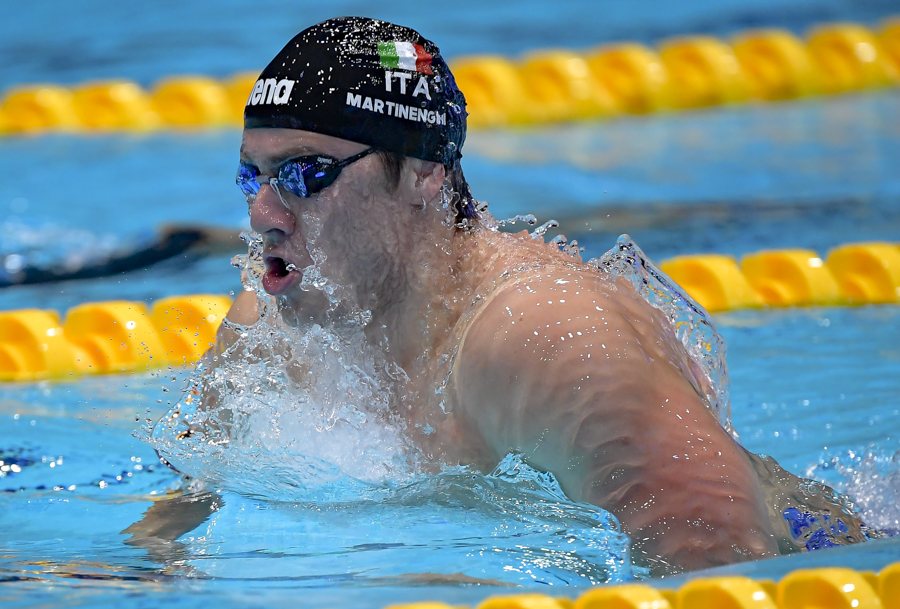 Nicolo Martinenghi was one of several Italian men who won Olympic medals in 2021, leading Italy to equal their medal haul from the prior 3 Games combined.

For the second time in four years, Italy takes home the National Development Award Swammy, an award given to a nation whose swimmers regularly outperformed expectations or whose junior swimmers rose to success on the international stage. In 2018, Italy won on the backs of several young promising women, including Simona Quadarella, Margherita Panziera and Ilaria Cusinato, though this year the Italian men stepped up to the plate to help Italy earn another National Development Award.

At the 2020 Tokyo Games, the Italians had their strongest showing in recent memory, bringing home 7 total medals, equaling their total from the Beijing, London and Rio de Janeiro Games combined. Six of those medals came from the Italian men, including Gregorio Paltrinieri’s silver in the 1500 free, Nicolo Martinenghi’s bronze in the 100 breast and Federico Burdisso’s bronze in the 200 fly. The Italian med also claimed a pair of relay medals, winning bronze in the 4×100 medley relay and silver in the 4×100 free relay. Rounding out the men’s Olympic medals was Paltrinieri, who claimed bronze in the 10k open water. Italy’s women also won a medal, with Simona Quadarella winning the bronze in the women’s 800 free behind Katie Ledecky and Ariarne Titmus.

The Italians also finished 2021 strong, finishing in third place in the medal standings at the Short Course World Championships with 5 golds and 16 total medals. They finished behind the Americans and Canadians in gold medals, but finished behind only the Americans in total medal count. Again, it was the Italian man leading the way, with Alessandro Miressi claiming gold in the 100 free, Matteo Rivolta winning the 100 fly and Alberto Razzetti winning the 200 fly. The Italians also won gold in the men’s 4×50 free relay and 4×100 medley relay, while also medaling in the men’s 4×100 free and men’s 4×50 medley relays.

It wasn’t all about the Italian men this year, however, as 16 year old breaststroke phenom Benedetta Pilato broke her first World Record in the 50 breast in May, clocking a 29.30. Pilato also claimed silver in the 50 breast at the Short Course World Championships and helped the Italian women grab the bronze medal in the 4×50 medley relay.

Honorable Mention (in no particular order):

Obviously Italy deserved it, but plenty to write about the rest, beginning from the honorable mention to Belarus (and also Turkey), considering that in the main event of the year (the quinquennium) both Shymanovich and Shkurdai weren’t scintillating (embarassing error about Miladinov who is Bulgarian, like Dee said). Australia was great at Tokyo, winning 21 medals (more than the double that at Rio16 and London12) and 9 golds, Switzerland won two Olympic medals (with Ponti and Desplanches) and, like Dee said, has made clear overall improvements (Djakovic was bronze in the 400 free at SC Worlds), at Tokyo there were historical medals for Hong Kong and Tunisia, Canada is continuing to improve..: so, I’d chosen other nations as “honorable mentions”.

As of Switzerland’s two Olympic medalists, Desplanches is training in France, and Ponti is training with an Italian coach as far as I know. I don’t know how ‘national development’ is defined by swimswam. Does it count if the main job is done by foreign coaches?

Deserving. Effectively summed up with a near-medal performance in the 4 x 100 Mixed Medley Relay at the 2021 Olympic Games. 4th place and ahead of USA. Balanced resume, both male and female, indeed.

We saw a slight foreshadowing of Italy’s ascent at the 2019 WCs; nice to see it bear fruit.

Italian relays have been on fire since the Olympics. Looking forward to them improving even more

Interesting comparing this years Swammy for Italy compared to their 2018 one . A lot of those named in the first articles aren’t even big players anymore

Very deserving. The Italians are not just freestylers now. Very balanced in events and only getting better.