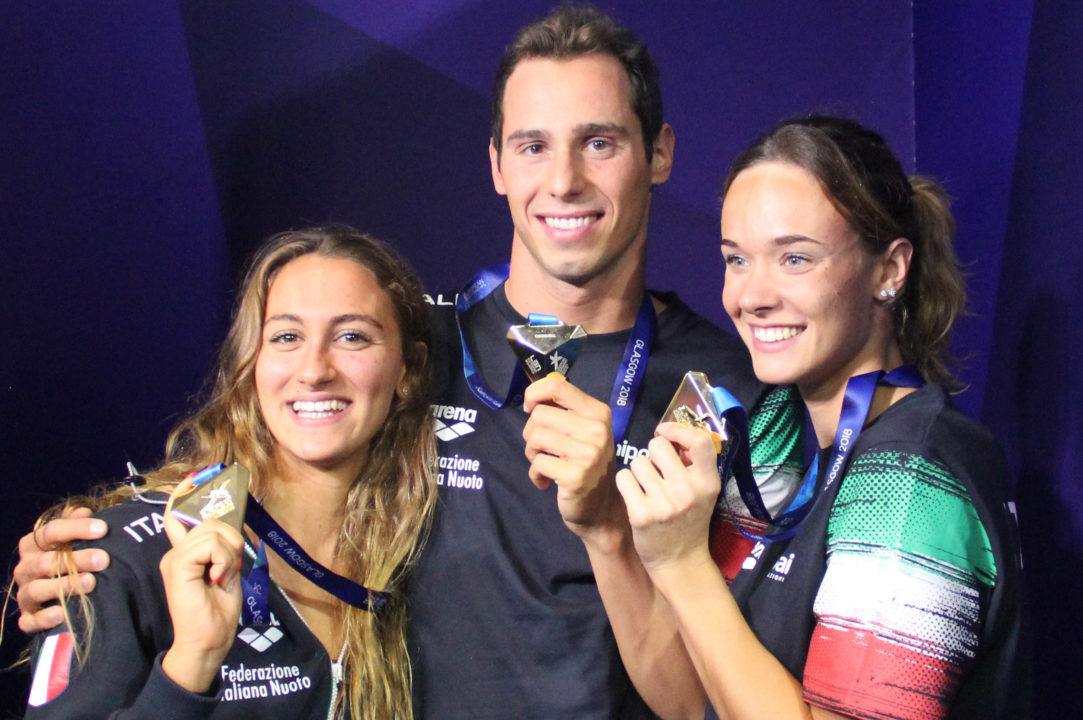 Not only did Italy break a lot of National Records in 2018, but Italian swimmers posted times to put the rest of the world on watch. Who's ready for some great showdowns in 2019? Current photo via Giusy Cisale

At the 2018 European Championships in Glasgow, Scotland, Italy placed 3rd in the overall medal table, where they took home 22 medals, including 6 gold, 5 silver, and 11 bronze medals. Only host nations Great Britain (24) and swimming superpower Russian (26) won more medals. For a country with some moderate swimming history, this finish for the Italians marked the most medals that they’ve ever won at the European Championships.

Individual European Champions from Italy include 19-year-old Simona Quadarella, who won gold in the 400, 800, and 1500 meter freestyles, Margherita Panziera, champion and Championship Record holder in the 200 backstroke, where she posted a 2:06.18–only .04 slower than Pan Pacs Champion Kathleen Baker–Alessandro Miressi, champion in the men’s 100 freestyle, and Piero Codia, who won the men’s 100 fly en route to a new Championships Record of 50.64, lobbing nearly a quarter-second off Laszlo Cseh‘s 2016 mark and posting the 2nd-fastest time of all 2018, behind only American Caeleb Dressel‘s 50.50 from the 2018 U.S. National Championships.

In addition to the individual champions, Italy brought home a pair of silver medals in the women’s 200 and 400 IM, thanks to 19-year-old Ilaria Cusinato, and a pair of bronze medals with Arianna Castiglioni in the 50 and 100 breaststrokes. Several other individuals picked up “minor medals,” as did the men’s 400 freestyle relay (silver) and 800 freestyle relay (bronze), as well as the 400 mixed medley relay (bronze).

Italy not only proved its metal in the pool, but also showed class in open water, where Ariana Bridi claimed gold in the women’s 25k, and Matteo Furlan bronze in the men’s 25k. Simone Ruffini also finished 5th in the men’s 25k, just 11 seconds behind Furlan. Rachele Bruni claimed bronze in the women’s 5k, with teammate Ariana Bridi finishing just off the podium in 4th. In the women’s 10k, three Italian swimmers finished top 8: Bridi took 8th, Bruni 4th, and Giulia Gabrielleschi 2nd, behind only Olympic champion Sharon van Rouwendaal of the Netherlands. Finally, in the team (mixed relay) 5k swim, the Italians placed 5th. The Italian men did not fare quite as well as their female counterparts in the 5k and 10k swims, though Furlan and Mario Sanzullo did manage 6th and 8th place finishes, respectively, in the men’s 10k, while Marcelo Guidi and Pasquale Sanzullo again finished 5th and 9th, respectively, in the 5k. It is important to note that Guidi and Pasquale Sanzullo are only 21-years-old, meanwhile Andrea Manzi is only 20-years-old, making them among the youngest open water swimmers in the field.

Beyond Euros, Italian swimmers also did well at the 2018 World Championships in Hangzhou, held in short course meters, where they won a total of seven medals, three of which were individual silvers coming from Quadarella (women’s 800 free), Orsi (men’s 100 IM), and Paltrenieri (men’s 1500 free).

With the 11th-hour addition of sprint star Santo Condorelli, who represented Canada at the 2016 Olympic Games and 2015 World Championships, finishing just off the podium in the 100 free on both occasions, Italy seems to be on a promising trajectory to become a global swimming power and potential European hegemon.

Previous Winners, and how they’ve built off their success:

Well deserved. And in the last season didn’t race some great swimmers like Detti and Martinenghi, beyond Silvia Di Pietro on the women’s side.
Two 2001, Thomas Ceccon and Federico Burdisso, are, in different ways, very promising, so Italian swimming improvement still to watch in the next seasons.