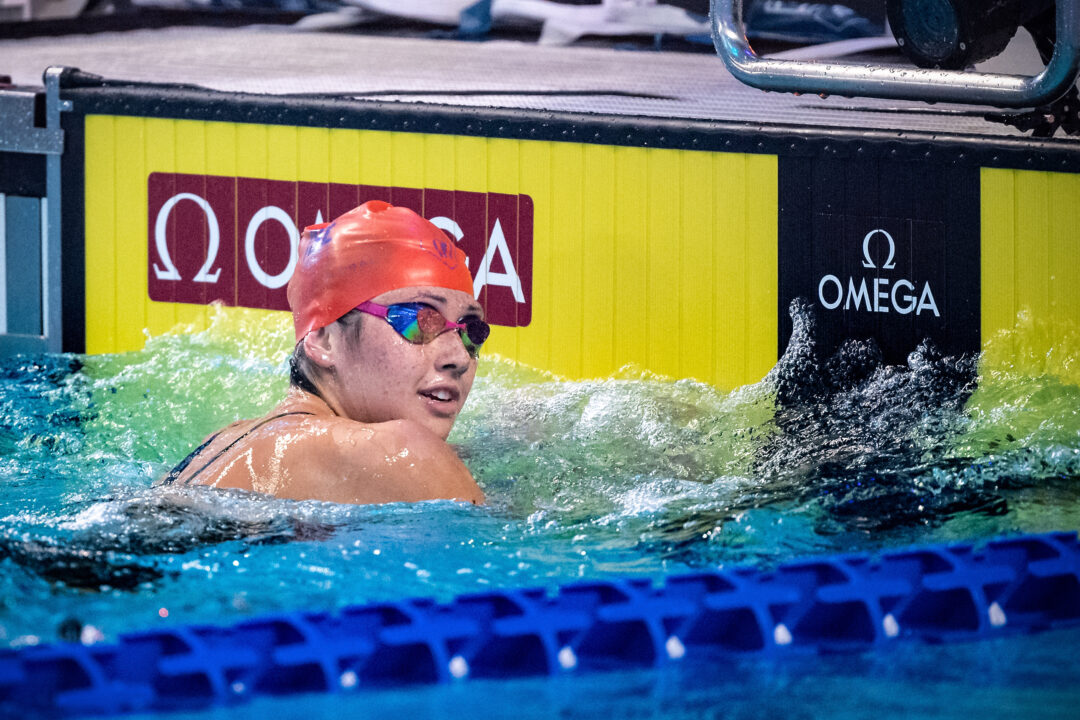 Siobhan Haughey won silver in both the 100 and 200 freestyles in Tokyo and capped her year off by breaking a Sjostrom world record. Archive photo via Giorgio Scala / Deepbluemedia / Insidefoto

The decision for who to give this award to this year was extremely difficult considering the performances of Siobhan Haughey, Yui Ohashi, and Zhang Yufei and the Tokyo 2020 Olympic Games. While Yufei and Ohashi’s accomplishments this year were mighty and will be discussed later, this award goes to Hong Kong swimmer Siobhan Haughey. The second half of this year featured a dominant showing by Haughey at the Olympics and into the short course season.

At the Olympics in July 2020, Siobhan Haughey comfortably qualified for the semi-finals of the 200 freestyle with a 1:56.48 for 8th place overall. In the next round, she shaved off more than a second to qualify in second place into the final with a 1:55.16 and had set herself up perfectly to vie for a spot on the podium. She sealed the deal in the final heat and went more than a second faster, posting a 1:53.92 Asian record.

Haughey became the fastest woman in Asian history and was the first swimmer from Hong Kong to ever win an Olympic medal.

She wasn’t done yet, however, and returned soon after to deliver a 52.70 100 freestyle prelims swim and advance to the semis in second place behind Emma McKeon (52.13). Haughey was even faster in the semi-final, lowering the Asian record to a 52.40 to retain her #2 position. Just as she did in the 200 freestyle, Haughey made it a 3-for-3 improvement in the final and took an additional 0.13 seconds off in the final. She finished with a 52.27 for the silver medal behind Emma McKeon’s winning 51.96 and ahead of Cate Campbell’s 52.52.

Haughey left the Olympic Games as a two-time silver medalist, multi-Asian record holder, and the most decorated Olympian in the history of Hong Kong.

Following her Olympic success, Haughey had a quick turnaround to her short course season as a member of the International Swimming League’s Energy Standard. Haughey’s freestyle range made her an asset for Energy Standard as that was exemplified in her ISL season 3 win record:

Haughey’s contributed to Energy Standard’s eventual season 3 win, evidenced by the fact that she finished #2 overall in the MVP standings season-wide. She earned 468.00 points over the course of her 8 ISL meets, second only to teammate Sarah Sjostrom who scored 511.50.

As the 2021 ISL season wrapped up, Haughey prepared for the third and final installment in her 2021 story. Haughey represented Hong Kong at the 2021 Short Course World Swimming Championships in December 2021. Her swim of the meet was her electric 200 freestyle, in which she won gold by nearly 2 seconds with a 1:50.31 world record. She shaved 0.12 seconds of Sarah Sjostrom’s 2017 mark and got closer than any woman has before to swimming a 1:49.

In the 400 freestyle at Short Course Worlds Haughey started off with a 4:02.57 for 4th overall in the prelims. In the final, however, she did what she needed to do to get on the podium, posting a 3:58.12 for third place (just half a second faster than Anastasiia Kirpichnikova’s 3:58.56).

Perhaps the greatest achievement of the year for Haughey was breaking a Sjostrom world record, but here’s a list of her accomplishments from 2021 that make her the favorite to win this distinction.

zhang yu fei won two golds in a day. she mainly trains for butterfly but also obtained gold in the 4×200 freestyle, breaking the world record. zhang yu fei actually won 4 medals in tokyo 2020, and on top of that a world champion title. sometimes freestyle does not weigh more than other strokes, but haughey deserves this title as well. well written!

“Haughey left the Olympic Games as a two-time silver medalist, multi-Asian record holder, and the most decorated Olympian in the history of her country.”

Hong Kong is not a country, it used to be a colony of the UK until it was handed back to China.

As for this award, how can 2 silver medals be better than 2 gold and 1 silver?

Okay but if you just wanted a list of “best Olympic finishes by country,” why did you even come here?

Who got 2 golds and 1 silver? Ohashi didn’t get any silver.

So it’s 2 golds and no best times versus 2 silvers, 5 Asian Records, a World Record, dominance in the pro league, 2 more gold medals and a bronze at second-tier World Championships but where one of those came against a pretty good field.

I can see the argument either way, but the totality of Siobhan’s year, I think, was better than Ohashi.

I think he means Yufei Zhang.

True….not a country. The National Olympic Committee is independent of China, despite being called Hong Kong, China; same as Macau, China. But you are right…not a country.

I think there should be more weights put on the Olympics in an Olympic year. You can’t punish Ohashi and Zhang for not putting too much focus on the short course season like many other top swimmers (Ledecky, Peaty etc.)

These awards are always tough to pick. Siobhan Haughey is a worthy winner but you could argue Zhang Yufei had equally strong claims, if not slightly stronger. In an Olympic year there should be a strong weighting to that big event. One individual gold and silver beats two silver medals. Also, Zhang Yufei’s times were relatively better. In the 100/200BF her times make her respectively the third and fourth fastest all-time performer. Haughey’s times in the 100/200FS make her the seventh and fifth fastest respectively. The clincher for me was that Zhang Yufei played an important part in China’s 4X200FS triumph which was one of the biggest upsets of the Olympics.

Also consider that China could medal on 4×100 but pretty much gave that medal chance away as they did not use Zhang instead of Ai on the final..

Not only Zhang but also Yang. Without their top two missing they probably should’ve got silver.

I agree, but double individual gold from Ohashi beats them both if we go off Olympics…

My wider point was that you have to look at the quality of the swims. Ohashi’s times were good enough for gold but they weren’t particularly fast in an historical context.