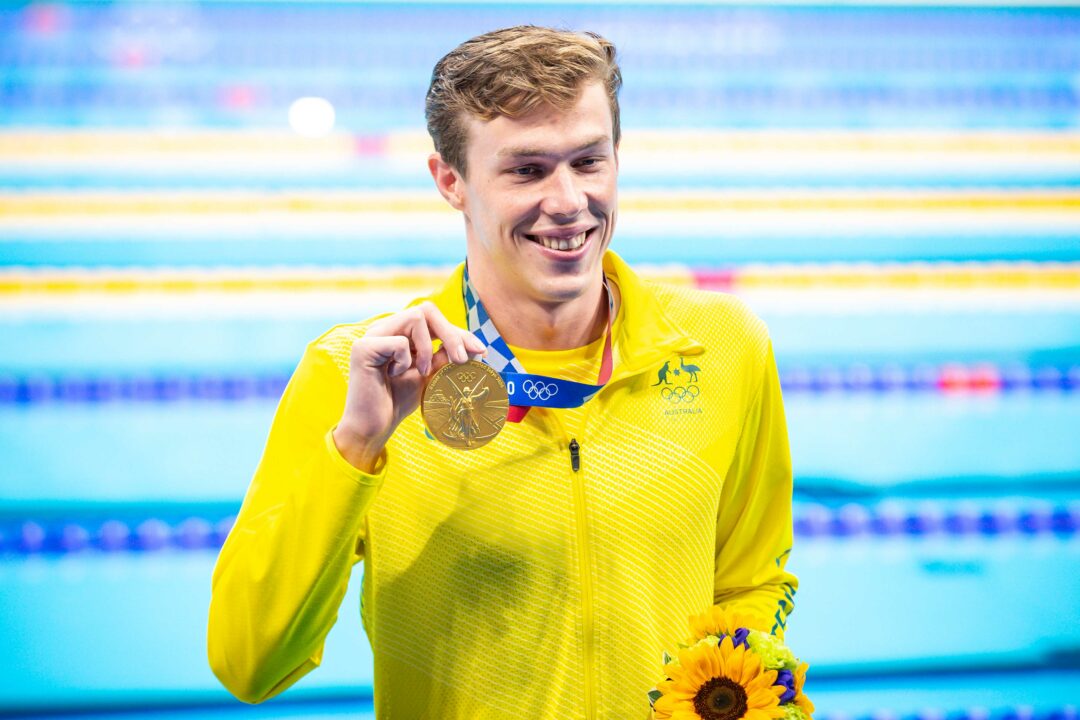 For the third consecutive year, an Australian breaststroker has been awarded our Swammy for the Oceanian Male Swimmer of the Year. In 2019 and 2020, it was Matt Wilson, but this time around it’s Zac Stubblety-Cook‘s turn to take the spotlight.

The 22-year-old Stubblety-Cook wowed the world when he soared to the top of the men’s 200m breaststroke podium at this summer’s Olympic Games. The ace fired off a super quick time of 2:06.38 to establish a new Olympic Record en route to clocking the only result under the 2:07 threshold in the Tokyo final.

But his performance was not a one-off stunner. Just weeks earlier, ‘ZSC’ put the world on notice at the Australian Olympic Trials, posting a monster 2:06.28 to come within .16 of Russian Anton Chupkov’s world record.

That lifetime best wound up breaking the Aussie, All Comer, Oceanic and Commonwealth records while rendering the Chandler athlete as the second-fastest man of all time.

Stubblety-Cook had shown flashes of brilliance in the past, including winning bronze in the men’s 200 breast at the 2017 World Juniors and silver in the event at the 2018 Pan Pacs, and then finished just off the podium in fourth at his World Championship debut in 2019. But in 2021, he leveled up and staked his claim as one of the best male breaststrokers in the world.

Flash forward to the Queensland Championships just earlier this month and Stubblety-Cook did it again, logging an impressive post-Tokyo outing of 2:07.00. That ties his second-best performance ever, a time that still would’ve taken gold at the Games.

I want him to make me a cup of his favorite coffee!

https://www.digitaljournal.com/sports/kyle-chalmers-talks-about-his-covid-diagnosis-reflects-on-2021-and-expresses-his-gratitude-for-family-friends-and-fans/article
Now Chalmers has covid too. Can’t take a trick.
Has anyone seen the article that says McKeon has covid?

I just tried posting the links but they got caught in mod queue. It’s been reported in the Canberra Times and the Illawarra Mercury so just google it.

Thanks. I’d tried but I don’t know how I missed it.

Very good swimmer, just goes & does his job in the last 50 metres.

Yay for ZSC. Sad that there was only one honourable mention. Hopefully the Aussie men can step it up with some great looking youngsters coming through.

Fastest in the field or fastest Aussie? I can’t remember what Neill split, but I can’t imagine he was faster than Scott’s 1.43.4? Agree on Cooper (and Edwards-Smith), big talent.

Hopefully Cooper continues to drop time in the 100 free as well because Chalmers really needs some reliable team mates. Anyone know if McEvoy is retiring?

ZSC’s gold was, probably, the deciding factor as Chalmers was a relay monster in Tokyo, being the leg that elevated the 4×100 onto the podium and almost onto the 4XMED one.

My other candidates for Honourable Mentions would be: