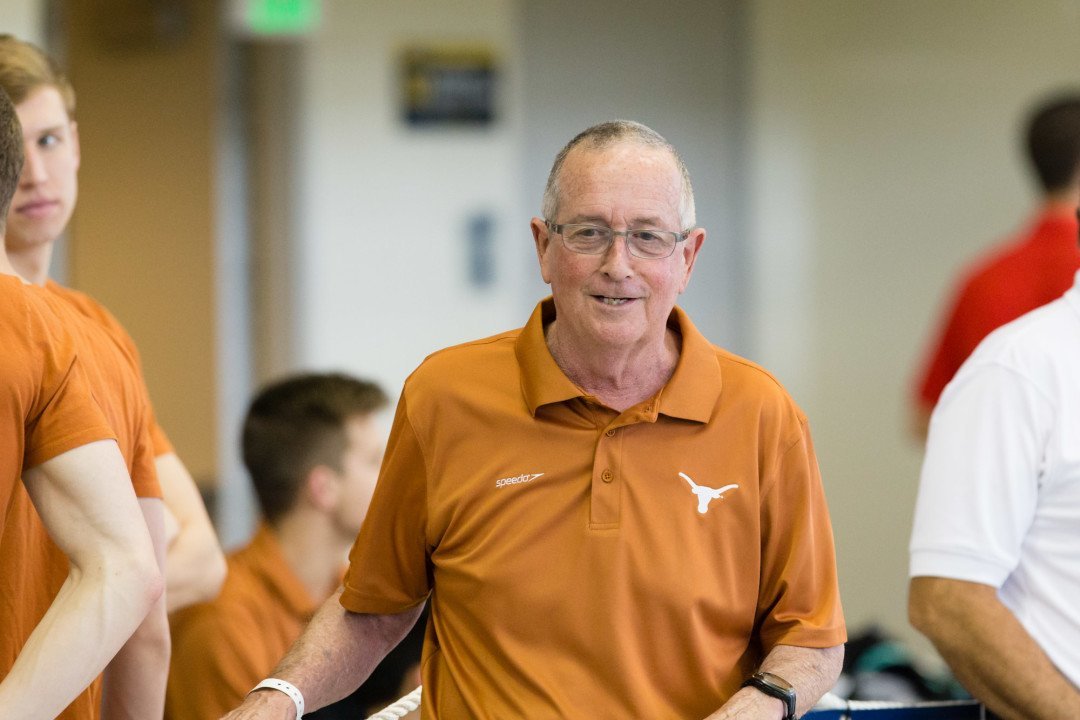 Under Reese's guidance, the Texas Longhorns swam fast all year and rolled to their 15th NCAA championship during Reese's tenure Current photo via Tim Binning/TheSwimPictures.com

Even after four decades as the head coach of the University of Texas, Eddie Reese never stops adapting. Over the last couple of years, we’ve seen the Longhorns shift from a team that looked beat up for much of the year to a team that is throwing down incredibly fast times all season long. This was on evidence throughout the calendar year, as Texas dominated in and out of championship season.

Sometimes this award tends to go to the coach who seems to have gotten the most out of the least, rather than someone whose team performs basically how you’d expect, but it’s just too hard to ignore what Reese did with the Longhorns this year. Texas swam fast throughout the 2020-2021 season, and ended up qualifying 26 swimmers for NCAAs that has no precedent in at least recent history, leaving Reese with the unenviable task of deciding which 10 men would have stay home.

Thankfully, the 16 swimmers who made up the NCAA squad helped blunt the impact of that decision by all scoring at least one time. Texas put at least one swimmer into every A-final, and unlike recent years, where some Longhorns struggled to hit their season-best times at NCAAs, every swimmer improved from seed in at least one event, and usually more.

All told, this was the 15th NCAA championship for Texas under Reese, and he has now won titles in five different decades. It initially looked like he was going to retire after NCAAs, but he later changed his mind. While the Texas swimmers didn’t have the best Trials or Olympics, the college team looked back to be in the groove come fall. Case in point – grad transfer Cameron Auchinachie and freshman Luke Hobson lit up the pool at the Minnesota Invite after just a few months swimming with the Texas group.

We don’t know how much longer Reese will be coaching, but he looks to be about as sharp as ever.

He’s done so much amazing stuff but qualifying 26 swimmers plus 5 divers to Nc’s is pretty freakish. I know a ton of coaches who have worked a 30 yr career to put maybe a handful of swimmers in the show. 31 in one year is nuts!

Recruiting the best class year in and year out certainly makes coaching a whole lot easier. Regardless Eddie is a great man and a great coach.

Many years ago, in a place called Daytona Beach, a babe was born under circumstances unknown. Followed by five years, another baby boy was born to the same parents in the same place. The first was Edwin Charles. Edwin was followed by Randy. Edwin blazed a trail that was followed closely by Randy. Edwin went to Mainland High School, Randy went to Mainland High School. Edwin swam, Randy swam. Edwin excelled in the medley events, Randy excelled in the medley events. It was here their paths diverged. Edwin went to swim in the swamp of Gainesville while Randy journeyed to the exotic land or Tallahassee and dawned the garnet and gold garb of a Florida state Seminole.

Thank you for the information.

Speaking of Bobby Finke, he finally got his TYR sponsorship deal!

That’s why he’s the GOAT

He is certainly on top of the NCAA world again. He is a nice guy with unbelievable longevity. Most of the game is of course recruiting. He gets superstar after superstar on an annual basis. This means the best have confidence in him. Doc had it, Daland had it and Marsh had it. Congratulations Eddie.

It’s such a wonderful combination to be not only the most successful NCAA swimming coach ever, but to also be one of the nicest, most positive and most ethical people you’ll ever meet. Congratulations to a coach worthy of emulation as both a coach and a person.

1) Multiple dopers in program
2) Ratted a Cal swimmer out 10 years ago for wearing a suit with an illegal logo, and then let his swimmers cry about it for weeks when Cal returned the favor.

I dunno man. Don’t make him what he is. He’s just a coach – who is sometimes ethical, and sometimes isn’t. He’s not a bloody deity.

I assume the one upvote is from Durden.

For a number of years, Durden bad mouthed Eddie and Chris to any recruit who would listen and acted like a petulant child to anyone associated with the Texas program. Lately, there seems to have been a little bit of a thaw between the teams, mainly because the swimmers have mutual respect for each other. As you alluded, there aren’t any perfect people out there. But some people are better coaches and builders of men. I’d say Durden and Eddie fit that bill.