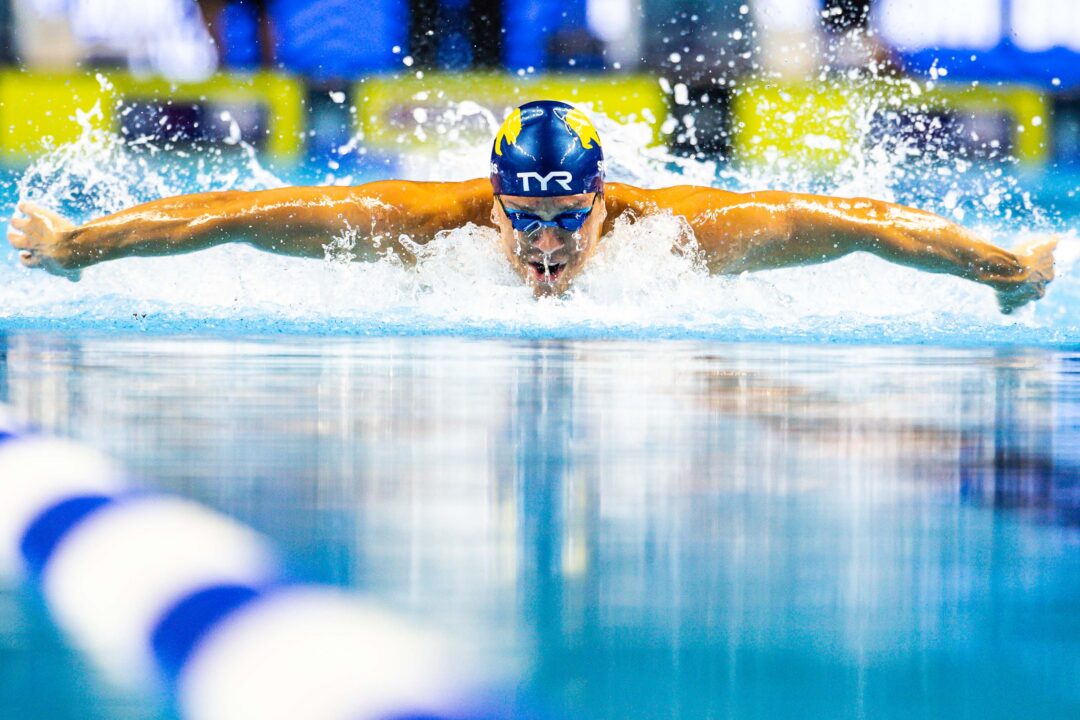 2-time US Olympic gold medalist Tom Shields has revealed that he has been diagnosed with pneumonia for the second time following the SC World Championships.  Archive photo via Jack Spitser/Spitser Photography

Two-time US Olympic gold medalist Tom Shields has revealed that he has been diagnosed with pneumonia for the second time following the Short Course World Championships.

Shields made the announcement on his Instagram stories over the weekend, writing “[At Worlds] each day of the meet felt worse and worse, continued to worsen when I got home, popped a fun 102-103 degree fever for a night or two…thought I had Covid but I never did.”

“[I] went to the hospital, warned them that I’ve had major lung issues before, even warned them that the “pulmonary function test and stethoscope” might not work because I can hold my breath for 6 minutes.” Shields continued, “I still got turned away.”

However, Shields did eventually get a diagnosis, as he wrote, “Luckily, I have some friends in a lung/allergy clinic who helped me confirm [that I have] pneumonia [for the] second time.”

According to the American Lung Association, there are approximately 3 million cases of pneumonia annually in the United States, and about 43,000 deaths annually. Its symptoms include:

Shields is a two-time Olympian for the United States, having won gold medals as a member of the men’s 400 medley relay in both 2016 and 2020. As previously mentioned, Shields represented the United States at the Short Course World Championships in early December, where he won a bronze medal in the 4×100 freestyle relay and a gold medal in the 4×50 medley relay. Individually, Shields failed to medal in the 50 and 100 butterfly despite entering the meet as one of the top seeds. In the 50 fly, Shields finished 7th overall with a time of 22.42, almost a half second slower than his season best and American Record of 21.99. In the 100 butterfly, Shields touched in a time of 49.80, a second off of his season best of 48.67 that still ranks him 3rd in the world this season.

Earlier in the season, Shields scratched from the 200 butterfly during the season finale of the International Swimming League, leaving an empty lane in his place. Shields later revealed that he was suffering from “shivers, dehydration, and gastrointestinal issues.”

my god he is swimming when his body is all messed up. he can get hit by a car and would have a lane to swim in. jfc.

I knew something was wrong at world champs. His performance wasn’t matching up with how he was dominating the flys at the World Cup circuit.

“hold my breath for six minutes”…gah damn
Nevertheless hope you get better Tom!

This has some serious Chuck Norris vibes.

When Tom Shields gets a pulmonary test, it is the equipment that gets assessed.

He does some free diving/spear fishing when he isn’t crushing butterfly. He posted on IG a pretty big sheepshead he speared

I know Tom reads the comment section. I wish you all the best and recover quickly. A true role model

Swimswams favorite swimmer??? He’s certainly a class act and nothing short of a true inspiration

He can hold his breath for 6 minutes?? that explains the dirty undies he has even at the end of races

I usually have “shivers, dehydration, and gastrointestinal issues” after the 200 fly.

Meanwhile, MA did worse than that without pneumonia.

I’d take it as my body saying “I need a break”. I mean, this man deserves a rest. He’s been cranking out amazing fly swims at every distance like he’s on some kind of permanent taper. I can’t imagine the training he has done, but it’s got to tax the body to stay at that level. I hope he feels able to take the time to properly recover. He’s earned it!