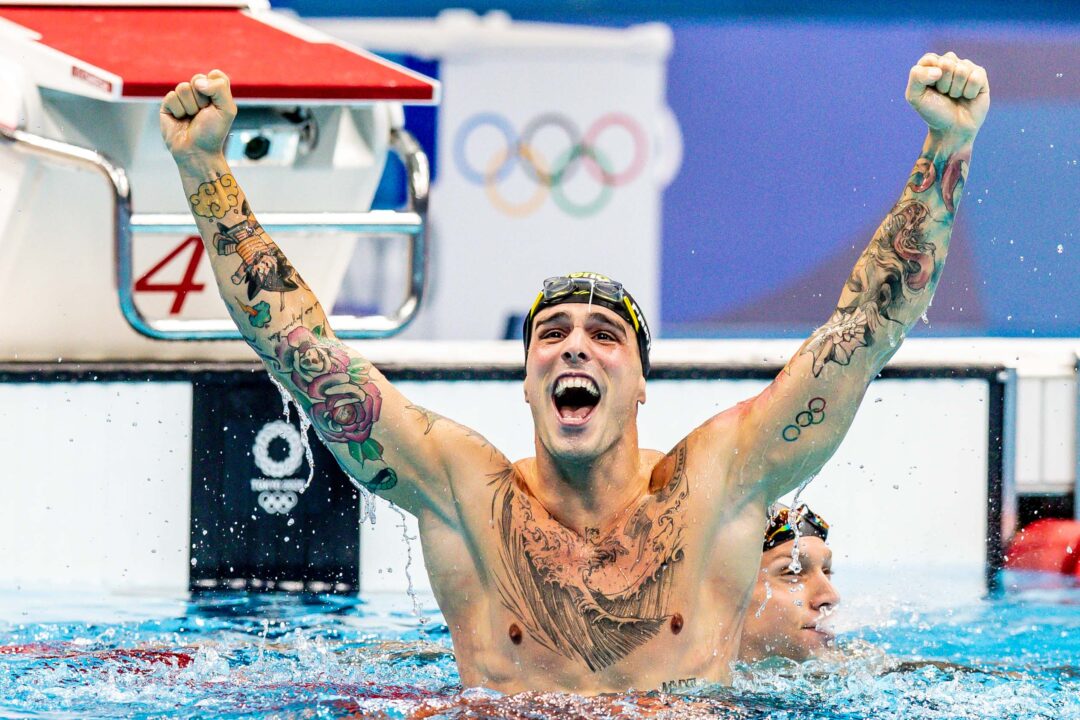 Fratus hasn't slowed down with age. In fact, he won his first Olympic medal at the age of 32, earning Bronze in the 50 free in Tokyo. Stock photo via Jack Spitser/Spitser Photography

This is Bruno Fratus‘ 3rd time winning the South American Male Swimmer of the Year Swammy, as he previously won the award in 2017 and 2019. Since 2017, the award has been alternating between Fratus and Nicholas Santos, who is an Honorable Mention this year.

Fratus finally accomplished the one thing that had eluded him throughout his illustrious career: an Olympic medal. At age 32, Fratus became the oldest swimmer in history to win their first Olympic medal, earning Bronze in the 50 free with a 21.57.

With his semifinals performance of 21.60, Fratus became the first swimmer ever to swim a sub-:22 in the LCM 50 free 90 times. After his finals performance, he’s now done so 91 times in his career.

We say Fratus finally grabbed his Olympic medal because he’d been so close multiple times in his career. He competed in the 2012 and 2016 Olympics, advancing to the 50 free final in both. In 2012, Fratus finished 4th, just 0.02 seconds off the medal stand. In 2016, he entered the meet as a favorite for a medal, but an off finals swim led to a 6th-place finish, and a frustrated Fratus was quoted as saying “For some reason, I’m not able to swim faster than that. I have no idea what is happening.”

Perhaps most impressively, Fratus hasn’t slowed down with age. In fact, he’s been the model of consistency since 2009, when he was 20 years old. Here is the summary of Fratus’ LCM 50 free season bests for each year since 2009:

Kids, watch Bruno after a race, that’s how you conduct your self, with class

Watch Bruno finish 3rd at the Olympics and lose his mind. That’s how you celebrate life and yourself

They all speak about winning and hating to lose. The mindset of Gold or nothing. Lol 😂

Shows the hypocrisy of coming third and being happy even though inside himself he‘s wanting the gold 🥇.

2
-7
Reply
Rafael
Reply to  Remel is going 20.7 this year #builtdifferent

He will. Don’t worry about that amigo

1
-9
Reply
Olympian
Reply to  Remel is going 20.7 this year #builtdifferent

Fratus is actually faster in textile: 21.2 against 21.3…
Fratus has a clean record with WADA…
It also always bugs me why/how Cielo didn’t make it to Rio 2016…

Maybe irrelevant since the medal count is what matter in the end of the day, but I like when swimming fans start comparing eras with all the “NBA/NFL like” silly stats like that.

6
-3
Reply
Olympian
Reply to  Remel is going 20.7 this year #builtdifferent

And Remel WILL BE the GOAT one day… still far behind Gary Hall Jr, Popov and Anthony Ervin in my opinion

Adrian probably tied it too