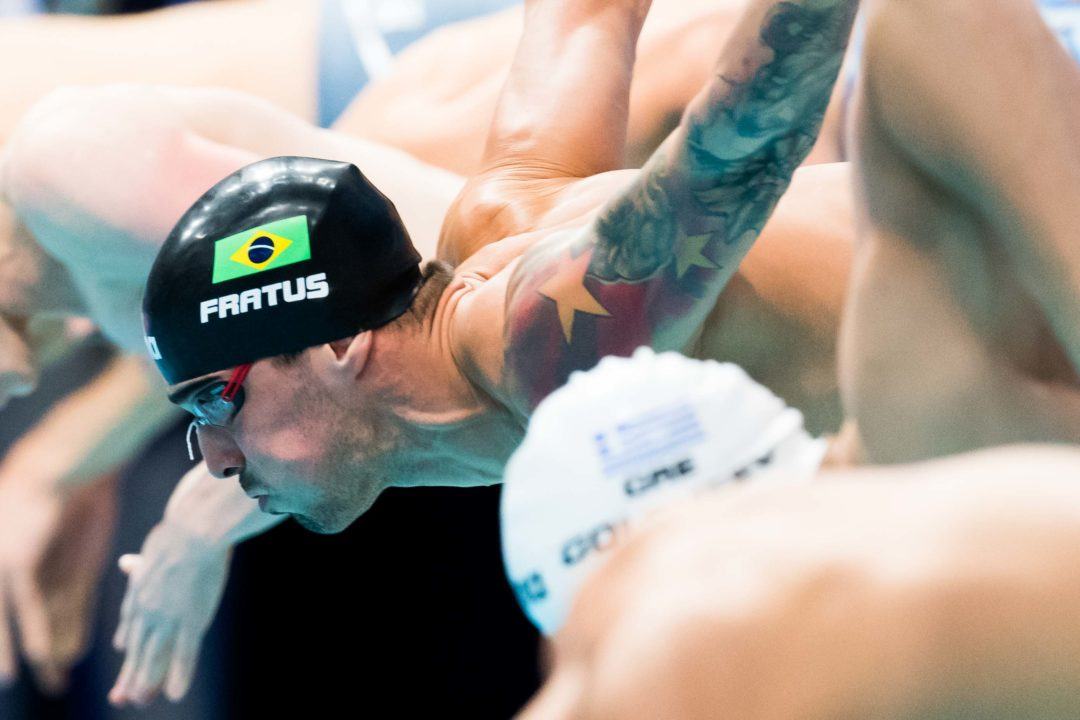 Despite getting dismissed from his club team for being "too old," Bruno Fratus came back in a huge way with a pair of World Championships silver in 2017, which is why he is our 2017 Swammy Award winner for South American Swimmer of the Year. Current photo via Mike Lewis/Ola Vista Photography

His dismissal was part of an onslaught of Brazilian clubs dropping swimmers due to their age. Other Brazilian swimmers who were dismissed from

their clubs or had to face a pay cut for being “too old” in 2017 include Joanna Maranhao, Thiago Pereira, Felipe Franca, and Leonardo de Deus.

Not one to give up, Fratus moved to Clube Internacional de Regatas de Santos, splitting his time between there and Auburn in 2017.

Fratus stuck it to Pinheiros on the very first night of the 2017 FINA World Championships in Budapest, teaming up with fellow veterans Cesar Cielo (30) and Marcelo Chierighini (26) and the young Gabriel Santos (21) for a silver medal and a new South American record 3:10.34, coming in behind only the Americans.

Fratus himself swam the anchor leg, putting up the second-fastest split of the field, a 41.18. He outsplit fellow anchor Nathan Adrian.

Later on in the meet, Fratus picked up another silver medal and South American record. This time, he grabbed was the runner-up in the 50 free behind only Caeleb Dressel with 21.27. The packed 50 free field included Vlad Morozov, Ben Proud, and Fratus’s countryman and world record holder  Cielo.

Moving forward into 2018, Fratus will be training in Coral Springs, Florida with his wife Michelle Lenhardt.

I would give an honorable mention to spajari that after not breakfast 49 since 2015 jr world did 7 48 this year ending with a pb of 48,25 and if the splits mentioned by the host were right he split a 46,74 on the 4×100 relay both on world military games