Should Nations Like Brazil Focus on Non-Olympic Stroke 50s? 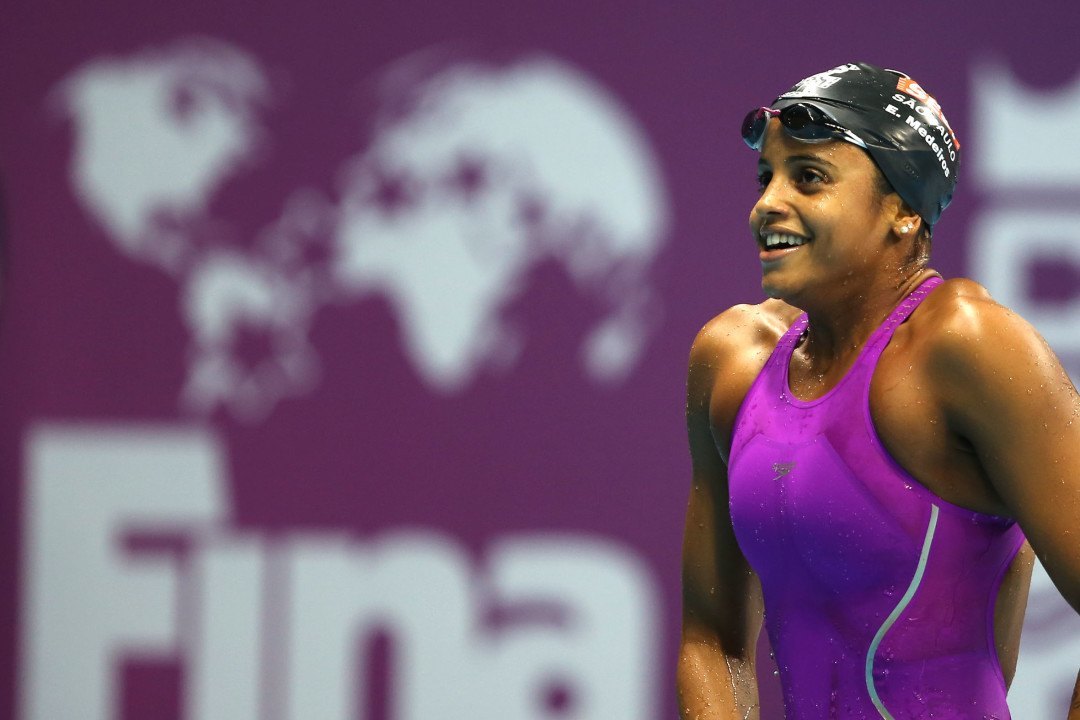 Given Brazil's medals in the men's 50 breast and 50 fly, and their likely women's 50 back medal tomorrow (Etiene Medeiros, pictured above), a question arises. Is it worth it for nations like Brazil to focus on the stroke 50s? Current photo via Satiro Sodre/SS Press

The Brazilians are masters of the 50 stroke. So far this week, the team has medaled in both of the 50-stroke events, with Nicholas Santos scoring silver in the 50 fly on day 2 and Joao Gomes Jr. swimming to silver and a South American record in the 50 breaststroke today. Brazil is also the only nation to have finaled both of their swimmers in the men’s 50 fly and 50 breast; Felipe Lima was fourth in the 50 breast, and Henrique Martins finished sixth in the 50 fly. The team is also shaping up to medal in a third 50 stroke event tomorrow, after defending short course world champion Etiene Medeiros put up the 3rd-fastest time in history in the women’s 50 back tonight.

This week in Budapest, the Brazilians have already seen a huge improvement over their Rio performance, when the big story for Brazil was actually the lack thereof. In 2016, the team became only the second in modern Olympic history to go medal-less in the pool at their home Olympics.

Though Brazil’s Rio performance was disappointing, it is not indicative of the country’s usual place at the international medal table. Recent world championship meets have been a different story for for the team largely due to the 50 stroke events. Last December at short course worlds in Windsor, Brazil came away with three medals: one apiece in the men’s 50 breast (Felipe Lima, bronze, 25.98 SCM), the women’s 50 back (Medeiros, gold, 25.82 SCM), and the mixed 4×50 medley relay (Medeiros, Lima, Santos, Larissa Oliveira, silver, 1:37.74).

Brazil’s 50 stroke focus seems to be happening at least partially by design. Case-in-point, this year, frontwoman Medeiros, despite holding the South American record, didn’t even attempt to make the Budapest Worlds team in the 100 back, once her signature event.

So the question arises: Should already-50-stroke-prone nations like Brazil focus their energy on the non-Olympic events?

The answer can be complicated. As the sport of swimming receives more and more media coverage at all levels, the status of the FINA World Championships elevates. Though the world championships will never get the same level of attention as the Olympics, it would be easy to argue that a world championships medal is worth more now than it has been in the past in terms of sponsorships and award money. With two long course and two short course meets every four years, the chance at four world championship 50 stroke medals in four years could outweigh the cost of training toward an Olympic medal for swimmers who are already more sprint-aligned.

A 50-stroke focus could also allow for older stroke swimmers to extend their careers past the usual retirement date. Look at 37-year-old Santos, whose silver-medal 50 fly made him the oldest world championships medalist in history earlier this week. We’ve already seen the potential for sprint freestylers like Anthony Ervin and Dara Torres to swim at a world-topping level into their 30s and 40s, so why not allow your older stroke swimmers to make a living in the sport? (This is actually at odds with the Brazilian clubs’ particular habit of dropping swimmers for being ‘too old’; though Bruno Fratus has certainly gotten back at Pinheiros with his world championships medal this week.)

Though elevated attention on Worlds, the potential for older swimmers to stay in the game longer, and the domestic focus on the club rankings may be reason enough to put attention toward stroke 50s, perhaps the easiest argument is the recent addition of the women’s 800, men’s 1500, and 4×100 mixed medley to the Olympic program. Any country that wants to bet that the IOC will add more pool events has a stake in making sure their 50-stroke programs are strong.

I think it is important that Brazil did not use the 50 as focus this year
Of all swimmers who went to World only nicholas qualified due to a 50 event. All others were qualified by fina points on Olympic events.