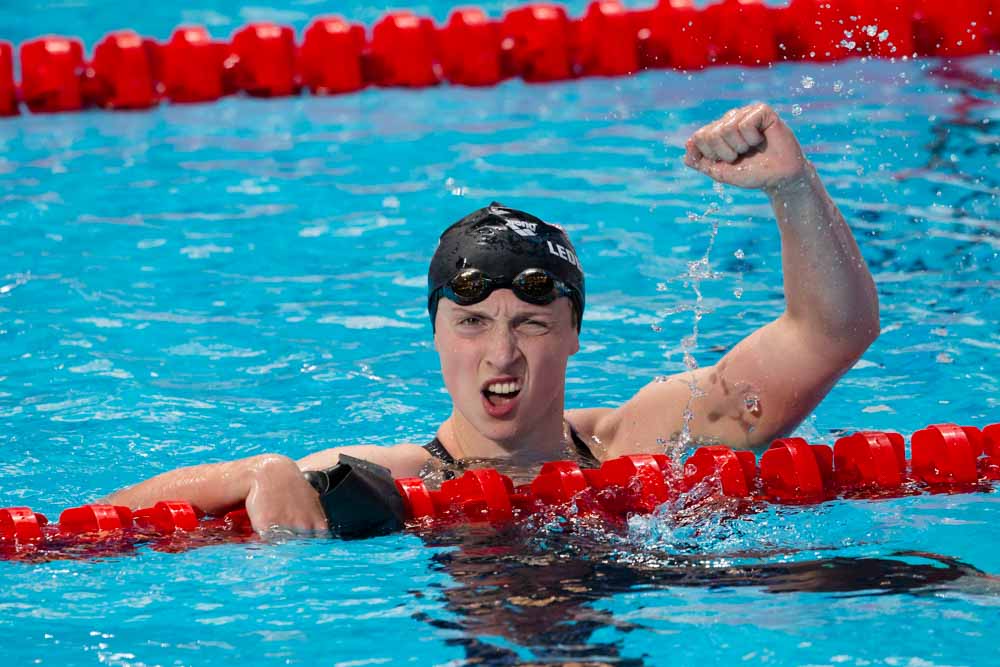 World record holder Katie Ledecky will have the opportunity to win the first Olympic gold in the women's 1500m freestyle at the 2020 Olympic Games.

In a set of changes that might both excite and frustrate swim fans, the IOC announced today that the men’s 800 freestyle, the women’s 1500 freestyle, and the mixed 400 medley relay will all be added to the swimming program for the 2020 Summer Olympics in Tokyo.

The addition of the women’s 1500 and the men’s 800 free will mean that men and women will finally compete with the same exact event lineup, something for which fans have clamored for years.  Previously the 800 free was the longest women’s event.  Men have competed in the mile or 1500m free in the Olympics since 1904, while the women’s 800m free has been part of the Olympic program since 1968.

This will presumably provide world record holder Katie Ledecky with an opportunity to become the first woman to win an Olympic gold in the event.  Of course, other distance swimmers should benefit as well.  At the 2013 World Championships, Chinese star Sun Yang won both the 800 and 1500 free (along with the 400 free), while Canada’s Ryan Cochrane earned a medal in each event.  Italy’s Gregorio Paltrinieri, the Rio 1500m champion, is another swimmer who has earned medals in both events.

Fans may be less thrilled about the addition of the mixed medley relay.  It has been part of the long course summer world championship schedule since 2015, but it seemed like countries did not take mixed relays as seriously as they did the gender-specific ones.  However, adding the event to the Olympic program may mean that it takes on increased prestige at world championships, including this summer’s competition in Budapest.

There was no indication from the IOC whether or not the additional events would impact any limits on each country’s roster size, currently set at 26 per gender, but given that the same IOC release stated that the overall number of swimmers will decrease by 22, an increase in team size does not seem likely.

FantasySwimLeague for the Tokyo?
After all, how many people on here think they know more about how swimmers will perform than national coaches themselves?

Mixed relays should not be a thing in the olympics.

I am so happy about the 1500 for women and 800 for men. Never made sense that everything for men & women were equal in track but not in swimming.

Any word on adding new open water races? Are they sticking to just the 10K?

tea rex – similar to the 50s, they didn’t say NO to any new open water races, but given the sweeping nature of their announcements today, I’d say the “silence is deafening.” The conference call didn’t offer an opportunity to ask questions, but we’re working on specifically receiving confirmation that the stroke 50s were denied – will tag extra open water swims into that request as well.

Not happy to see an additional relay event. They could have replaced the men’s and women’s medley relays by two mixed medley relays, 4×100 and 4×200. Mixed relays have the advantage that more smaller countries are competitive, those countries that have less than 4 elite swimmers of the same gender.

They should have added the mixed 4×100 free relay as well.. then we can see which countries have dominance in both men’s and women’s sprints combined

The idea is to add events without adding swimmers. Adding the 50 strokes or the 4×50 free would involve adding quite a few new swimmers. Adding the two distance events and a mixed 4×100 relay won’t add many swimmers–and making it the mixed relay gives something to the people who like the strokes.