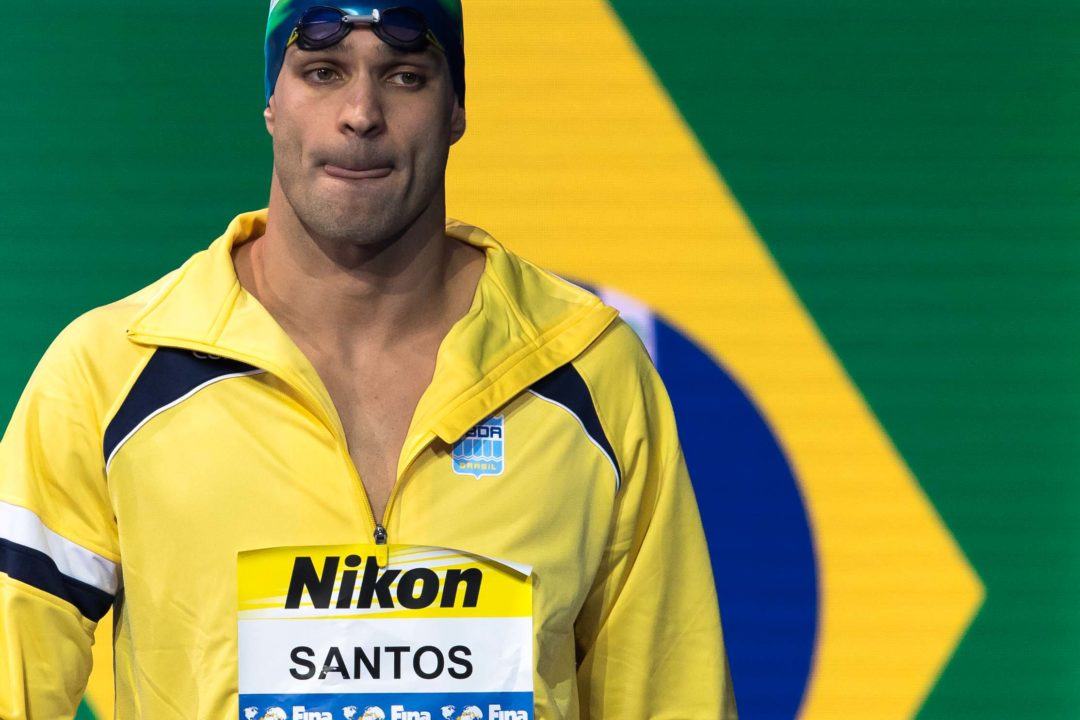 Amid an atmosphere when Brazilian swimmers are being fired from their clubs for being "too old," Nicholas Santos became the oldest swimmer in history to win a World Championships medal today. Current photo via Mike Lewis/Ola Vista Photography

2021 Big Ten Swimmer of the Year Max McHugh took down all three of his breaststroke lifetime best times in long course meters at a club meet in Minnesota.

Yesterday, the ‘old guys’ of the Brazilian swimming gave the Americans a run for their money and came up with a silver medal, national record, and South American record in the 400 free relay. Cesar Cielo (30), Bruno Fratus (28), and Marcelo Chierighini (26) combined with 21-year-old Gabriel Santos for 3:10.34, with Chierighini swimming the third-fastest textile split in history (46.85).

The Brazilians held with their ‘old guys’ theme today. 37-year-old South American record holder Nicholas Santos became the oldest-ever swimmer to win a world championships medal tonight when he went 22.79 for silver in the 50 fly. Santos, 10 years older than any swimmer in the field, came up just .04 behind gold medalist Benjamin Proud. Santos’s swim was 7th-fastest in history, and just over a tenth off his South American record of 22.61.

Santos already held the title of oldest World Champs medalist, having won a silver medal in the 50 fly back in 2015. At that point, he nabbed the record by just 8 days over Germany’s Mark Warnecke. Warnecke (interestingly enough, born a day shy of exactly 10 years before Santos), won gold in the 50 breaststroke at the 2005 World Championships in Montreal. He’s still the oldest world champ in history at 35 years, 5 months and 12 days.

On the women’s side, Therese Alshammar of Sweden is the oldest swimmer to win an individual gold medal at long course worlds, after taking a silver in the 50 fly in 2011 at the age of 33.

Santos’s swim and yesterday’s relay performance come at a time of particular relevance for the Brazilians, as many of their top swimmers have recently been fired from their swim clubs due to their age. Most notably, Fratus was dismissed from Pinheiros in January. Other Brazilian swimmers who have been dismissed from their clubs or had to face a pay cut for being “too old” include Joanna Maranhao, Thiago Pereira, Felipe Franca, and Leonardo de Deus.

Though Santos’s club, Unisanta, has not made moves to drop him, his performance tonight, especially coupled with yesterday’s relay, sends a message to clubs throughout the country.

The age issue may be the tip of the iceberg for systemic problems with Brazilian swimming. Investigations into the CBDA have led to funding cuts, lawsuits, suspension of salaries and national championship meets, and even the arrest of long-time CBDA president Coarcy Nunes. However, Brazilian swimmers are fighting back in the way that they know best: with strong performances in the pool.

Santos time are wrong on the story.. Also.. Santos was already the oldest medalist from 2015 Worlds.. Today he just increased this record..