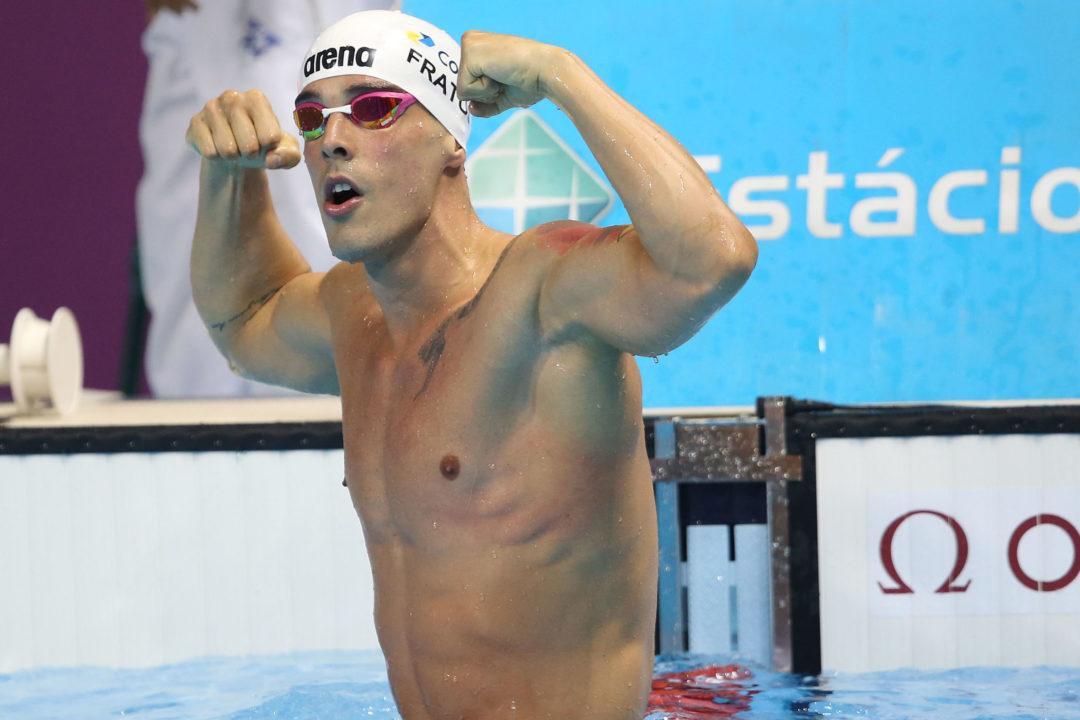 The sprint format meet features multi-round elimination-style races in the 50s of all four strokes, with the slowest swimmer in each round eliminated until only two remain. Then the teams square off in a 4×50 medley relay, with each nation earning points for how well they finish in all five events.

Full results aren’t yet available, but we do have word of some of the overall event results, per a report from Brazilian news site Globo.com.

Argentinian Andrea Berrino and Italian Elena Gemo were the first two eliminated out of the women’s backstroke, though it’s not clear in what order. That left a final between Brazil’s reigning world champ Etiene Medeiros and new American pro Hellen Moffit.

Moffit’s more recent successes have come in butterfly, where she was the World University Games champ in the 100. She didn’t have the speed in backstroke, though, to challenge Medeiros, who stayed red-hot with a 28.00 to Moffit’s 28.74.

Medeiros is coming off a summer in which she became Brazil’s first-ever world champion swimmer on the women’s side. She was Brazil’s only gold medalist at 2017 Worlds, winning this event, the 50 backstroke.

Joao Gomes Jr was one of three individuals to win silver at Worlds for Brazil, and the only man to beat him – superstar Brit Adam Peaty – wasn’t competing at Raia Rapida. Gomes blew out the field, beating Italy’s Fabio Scozzoli by almost half a second (27.25 to 27.68) in the final. American Chuck Katis and Argentinian Facundo Miguelena were eliminated in the opening two rounds.

The only win for the Americans came in the 50 fly, where speedster Kendyl Stewart topped home-nation hero Daynara de Paula 26.28 to 26.76. Stewart is a former U.S. National Champion, but did not make any American traveling teams this past summer.

This was likely one of Italy’s better events with World University Games runner-up Elena di Liddo, but she was eliminated early along with Argentina’s Maria Belen Diaz.

Bruno Fratus stayed well ahead of a men’s sprint free field that was probably the deepest of the four events. American Anthony Ervin made the final along with Fratus. Ervin was the 2016 Olympic champ, but didn’t have a great summer of 2017. The opening round was brutal, with Fratus running away from the field in 22.95 but the elimination coming down to three men within three one-hundredths. Ervin was 23.17, Argentina’s best swimmer Federico Grabich 23.18 and Italy’s Lorenzo Benatti 23.20.

In the second round, Fratus once again topped Ervin as Grabich got the boot. And then in the final, both Fratus and Ervin came up with their best swims, but it was Fratus getting the easy win 22.36 to 22.64.

Having won three of four strokes, Brazil held 11 points heading into the final event, and the only way they could lose was if Team USA won the relay and Brazil finished 3rd or lower.

The home team roared out to a big lead with Medeiros and Gomes dominating their fields once again. But Stewart rolled the Americans all the way back into the lead on butterfly, adding some drama to the competition late.

Fratus, though, was too good on this day. He ran down Ervin to win the relay and clinch the meet for Brazil.

Sorry if I have missed the answer to this from previous threads, but will there be another Duel in the Pool?
Recently, they have been held in December of odd-numbered years when there are no SCM world champs. I have not seen any announcements in 2017.