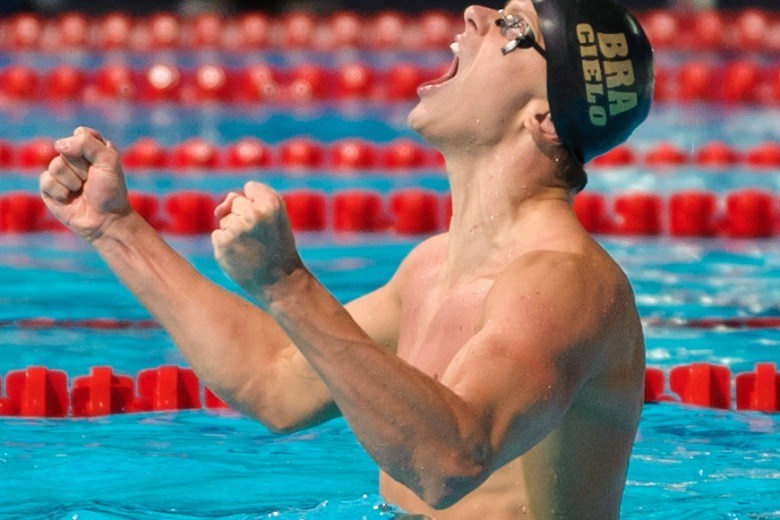 Cesar Cielo, winner of two individual golds this past summer, is the 2013 Latin American Male Swimmer of the Year Current photo via Victor Puig

With a remarkable turnaround following double knee surgery at the end of 2012, the 2013 Latin American Male Swimmer of the Year Swammy goes to world record holder sprinter Cesar Cielo of Brazil.  After a sub-standard performance at the 2012 Summer Olympics (only for a swimmer like Cielo is an individual bronze medal “sub-standard”), Cielo underwent surgery on both knees in October that fall, with the lengthy recovery and loss of training time looking like it would severely impact his 2013 season.  Cielo changed his seasonal plan, focusing strictly on the drop-dead sprint events for the 2013 World Championships (the 50m freestyle and 50m butterfly).

Working with a reduced schedule at Worlds, Cielo defended his 2011 titles, touching in 21.32 in the 50 freestyle and 23.01 in the 50 butterfly (he was 22.86 in semis).  Notably, that freestyle swim was also the #1 textile performance of all time, giving him his sixth individual long course World Championship title, the same number as all-time greats Grant Hackett and Ian Thorpe.

The remainder of 2013 continued to be busy for Cielo.  In October, he began training in Tempe, Arizona with new Mesa Aquatics (which recently merged with Sun Devil Aquatics) National Training Group – Post-Grad Director and former teammate Scott Goodrich, and most recently competed at the Minneapolis Grand Prix, turning in some pretty respectable times in the 50 yard freestyle (18.83), 100 free (41.90), and 100 fly (46.19).  He also recently secured a new sponsorship deal with Furnas in his home country of Brazil, which also contributes to Novos Cielos, a foundation that teaches children to swim.