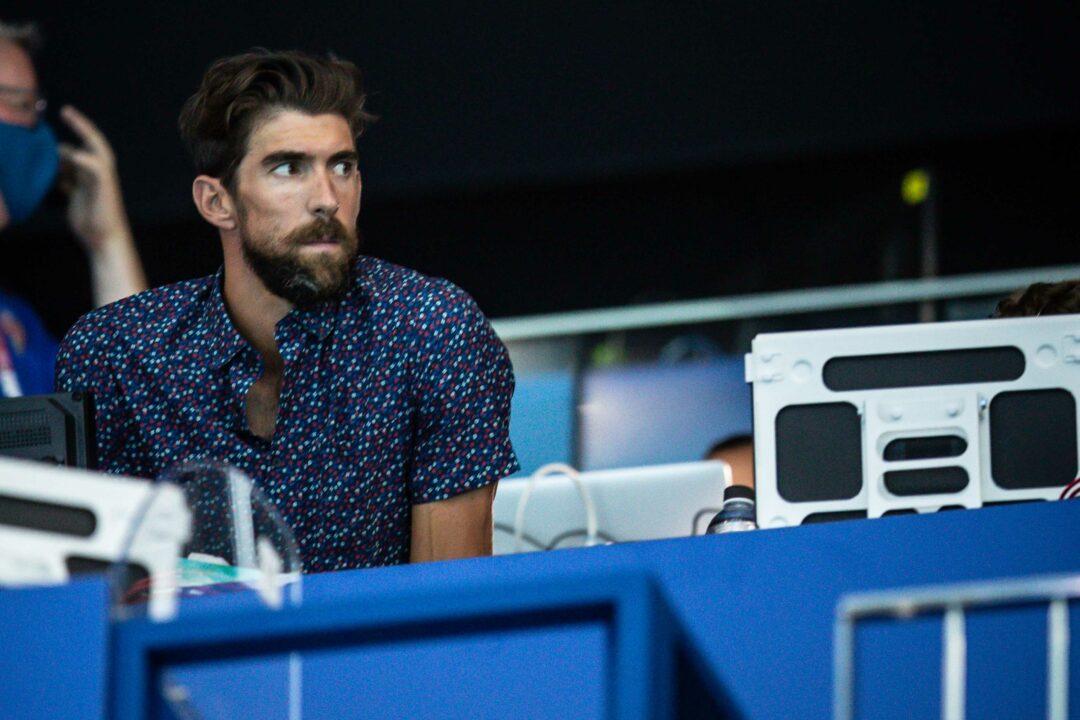 UPDATE: The United States men finished 4th in the 4×200 freestyle relay. Zach Apple had the slowest split of the American finals group, splitting 1:47.31, as the Americans missed the podium. That marked the first time at a non-boycotted Olympics where the American men missed a medal in a relay.

In a one-on-one sit-down on with NBC’s Mike Tirico between swimming events during tonight’s coverage, Michael Phelps expressed his surprise in the decision to not use Caeleb Dressel in the men’s 4×200 freestyle relay. Phelps, who has been active in Tokyo for NBC commentating races live and doing coverage away from the pool, left no doubts in how he felt Dressel could be advantageous for tonight’s 4×200 freestyle relay final.

The full quote from Phelps:

“It’s shocking. You know, in my opinion, he’s probably the best 200 freestyler in the world. He can probably put up one of the best times that we’ve seen. Leaving him off that relay, to me, I think makes it a lot harder to win the gold medal.”

There was speculation that Dressel would end up on the final of 4×200 freestyle relay after he clocked a smooth 1:46.63 in the 200 freestyle preliminaries at U.S. Olympic Trials last month. While Dressel is obviously known more as a sprinter, he’s no stranger to longer races, most notably when he blasted the American, U.S. Open, and NCAA records in the 200 yard IM back in 2018. In addition, the coaching staff has already proven to go against the grain during the Tokyo Games, placing Simone Manuel on the final of the women’s 4×100 freestyle relay. However, Dressel does have a busy schedule ahead of him, including presumably 7 more individual swims and multiple relay swims this week.

Phelps himself has plenty of experience in participating on Olympic relays in which he did not “officially” qualify at U.S. Olympic Trials. During his final four Olympic Games, Phelps competed in the final of the 4×100 freestyle relay for Team USA, despite never competing in a semifinal or final at Trials.

Even if Dressel wasn’t an option, why didn’t they choose to put someone like Seliskar or Pieroni in the final?

Dressel would have been about 3 sec’s at least faster than Apple’s split. That could have put our relay in a position to challenge GB. Especially if Dressel went last. And Dressel’s 200 free is no way over rated.

It doesn’t matter anymore the race is over! What I’ve learned here is, it’s not about times. It’s about racing, there’s no coulda? Woulda? Shoulda? Can speculate and do different options, but it doesn’t change the outcome now! I love all the US 4×2 boys and it’s always a pleasure to race them, especially Townley, Blake, and Seli. What’s done is done, but even i thought doing a 100 free into a 200 is a tough cookie!

Most commenters, including MP, completely missed the fact that they removed Seli or Peroni for Apple. Apple was 100% all in on that Semi-final. Why on earth would you take a guy who put it all out there for the 100FR over a rested and better prepared Seli or Peroni? So much judgement over not using CD when using Seli or Peroni with the exact same split would have meant silver instead of tin.

Coaches set zapple up to fail by putting him on so soon after the 100m semi. I’m glad the criticism is largely directed at the coaches instead of Zach but I’m sure he still feels terrible and I wish that had been prevented in what would likely have turned out better for the other swimmers.

At least they are going to get a silver medal

The decision to put Apple on the US relay was pushed by Ray Looze. This was despite Apple not having the 4th best PB and despite the tough double.

Apple, a previous IU swimmer was put on the relay by the IU coach. Favoritism, and the desire to bolster his own resume just cost the deserving USA swimmers a medal. I am sick to my stomach.

Michael is right..1:45 or 1:44 split I bet if he’d swum. ..But no one may ever touch Beidermans individual times unless in a supersuit…

Think Dressel of he concentrated. could be a 1:44. But off subject a little. No one will beat beidermans times unless in a super suit..

Losing a relay would be a gut punch for them