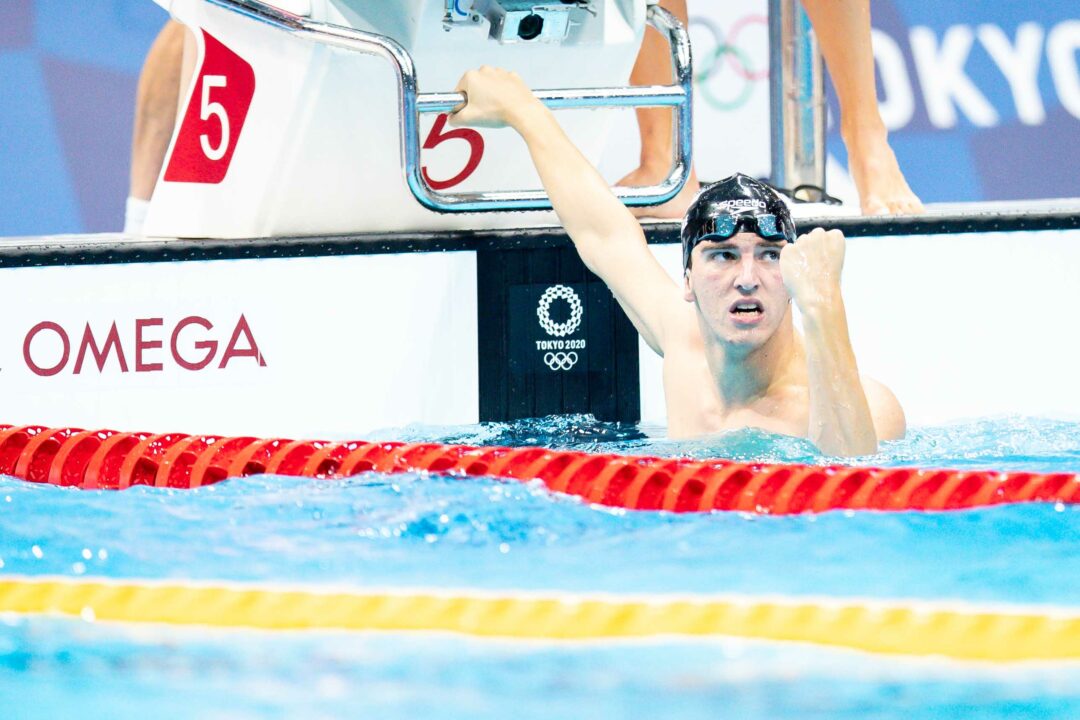 Caeleb Dressel will not swim on the American men's 4x200 free relay, as the coaches have given the nod to Drew Kibler after he led off the prelims in 1:46.12. Current photo via Jack Spitser/Spitser Photography

The United States has opted not to roll the dice and run with Caeleb Dressel in the men’s 4×200 freestyle relay final.

The coaching staff has gone with the more justifiable and perhaps conversative approach, keeping Drew Kibler on after a solid showing in the prelims, bringing in individual 200 freestylers Kieran Smith and Townley Haas, and rounding out the squad with Zach Apple.

Smith and Haas earned their spots by going 1-2 in the 200 free at the Olympic Trials. Kibler was third in that race, and further reinforced his inclusion in the final after leading off in 1:46.12 in the heats—faster than the three other swimmers with relay exchanges.

Apple was only fifth at the Trials, but has had a strong start to his debut Olympic campaign after anchoring the Americans to gold in the 400 free relay, splitting a blistering 46.69. Apple also had the individual 100 free during the heats session, which would be a primary reason why the staff opted to utilize Blake Pieroni, who was seventh in the 200 free at Trials but qualified for Tokyo in the 400 free relay.

Dressel was always an option after going 1:46.63 at the Olympic Trials last month, and as arguably the most talented active swimmer in the world, many believe he has at least a relay split of 1:45-mid in him. But he’s got a busy program over the course of the rest of the meet, including the 100 free semis earlier in the session.

Bringing Dressel onto the finals relay would be a hail-mary type of move in order to bridge the gap to Great Britain, who may have come in as favorites but are now overwhelmingly looking like a near lock for gold. Even if the U.S. did tap Dressel on the shoulder, first place appears to be out of reach barring something miraculous.

Some of the other moves were no-brainers, like Great Britain bringing in Duncan Scott. The Brits have a stacked lineup, led by Tom Dean and Scott, who went 1-2 in the individual 200 free, and 2015 world champion James Guy, who blasted a 1:44.66 split in the prelims.

Matt Richards, who led off in 1:46.35 in the heats, has been chosen as the fourth swimmer over Calum Jarvis, who split 1:45.53 with a flying start. Either way, the Brits will have a shot at the 12-year-old world record.

The Aussies have added Kyle Chalmers and Thomas Neill, while Elijah Winnington, the country’s top individual swimmer entered in the 200 free at the Games after Chalmers dropped the event, has been taken off after being out-split by Zac Incerti (1:45.58) in the heats.

Rounding out the Australian team will be Alexander Graham, who was very strong with a 1:45.72 lead-off in the evening.

The Italians bring in Stefano Ballo, while Russia (ROC) has surprisingly left off Alexander Shchegolev, instead opting to use last night’s 100 backstroke champion Evgeny Rylov. Shchegolev was 1:45.82 at the Russian Olympic Trials in April, but only split 49.13 on the prelim 4×100 free relay. Rylov swam a best time of 1:46.51 at those Trials.

Mikhail Dovgalyuk (1:46.56 lead-off in the prelims) also remains on the team, while Mikhail Vekovishchev (1:46.11 split) has been bumped.

The Brazilians, the 8th seed in prelims, has kept the same relay, but has opted to swim from fastest to slowest, leading off with their National Record holder in the 200 free Scheffer.

Good move. As much as we all would have loved to see what he can do, the risk isn’t worth it with the schedule he has coming up.

:thumbup: on the updated moniker

Smart. Don’t gas Dressel with no real shot at gold

1:43 leadoff, yeah would love to see that too but isn’t happening.

This is the safer option, but there’s far less upside. I don’t see USA winning a medal without someone splitting something kind of crazy and I feel like dressel has the most potential to do that, but it’s clearly a risk

I’ve been wondering this all day: what’s the deadline for relay lineups? We’re used to them announcing them like an hour before, but is there a hard cut off?

One hr before finals.

Cards need to be submitted 1 hr before the session starts, and then they are published 5-10 minutes after the deadline.