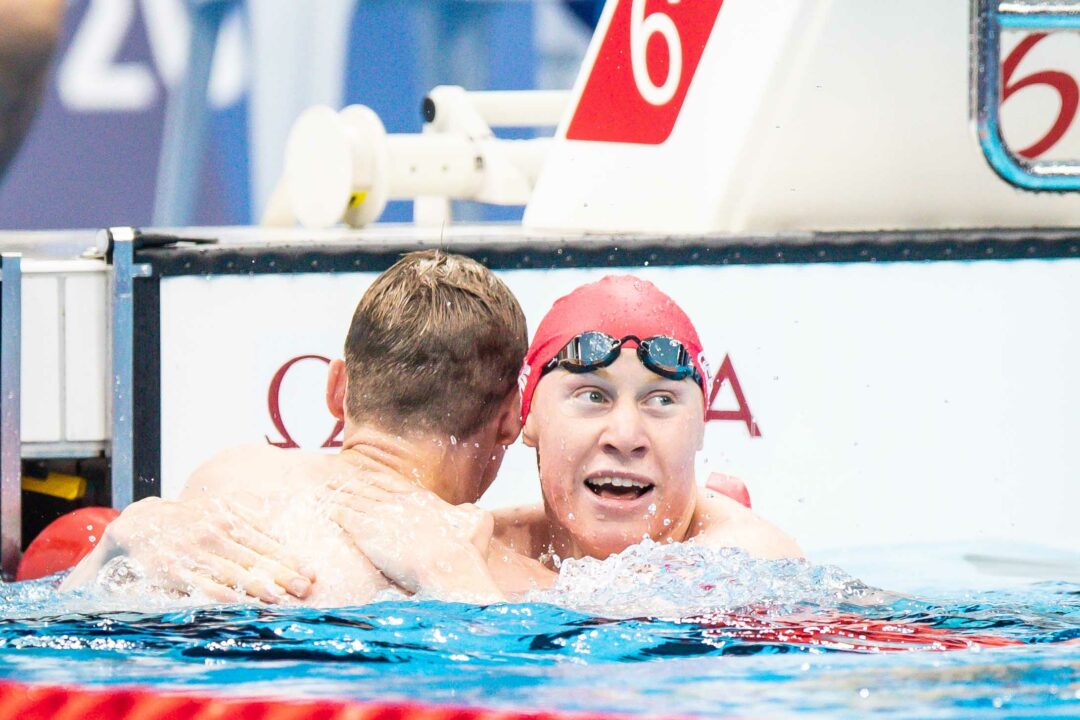 After a 1-2 sweep of the 200 free, the British men have a chance to break the first super-suited long course men's relay world record in the 4x200 free relay. Archive photo via Jack Spitser/Spitser Photography

The big story will be Katie Ledecky vs Ariarne Titmus, round 2. This 200 showdown comes after Titmus chased down and beat Ledecky in the 400 free in a showdown of the two fastest swimmers ever in that event.

Titmus is probably better-suited for the speed of a 200, and at Australian Olympic Trials, she was just hundredths of a second away from a super-suited world record. But don’t count out Ledecky, who did have more early speed in that 400.

Beyond those two, Hong Kong’s Siobhan Haughey should be in the mix for a medal, which would be Hong Kong’s first-ever Olympic swimming medal.

World-Record-Watch continues as Kristof Milak is expected to challenge his own 2019 world record in this 200 fly. The 21-year-old Hungarian has surpassed even the great Michael Phelps in this event, and it’s not out of the question that the rising butterflyer could become the first man under 1:50 in this event. Milak was 1:50.73 at age 19 in 2019.

The battle for the minor medals should be an entertaining one. South Africa’s Chad le Clos is known for his aggressive – some would say irrational – front-half speed in this particularly punishing event. It’s very possible le Clos is leading everyone, even Milak, at the 100-mark. But then things should tighten up in a field with several great closers like Leonardo de Deus of Brazil and Tamas Kenderesi of Hungary.

The women’s 200 IM is much more wide open, with first-time Olympian Kate Douglass holding the top seed. Douglass and her college teammate Alex Walsh are the two young Americans leading this race, and both should be in the mix for medals.

Where most medal finals have the best races concentrated in the middle of the pool, it’s possible this one has the leaders coming on the outside. 400 IM gold medalist Yui Ohashi will start up in lane 2, and on the outside of her is world record-holder and defending Olympic champ Katinka Hosszu. Ohashi dropped 3.7 seconds from prelims to finals in the 400 IM, so don’t count her out even from an outside lane.

Great Britain’s Abbie Wood is the #2 seed into the final, and watch for China’s Yu Yiting to challenge her own world junior record.

Katie Ledecky will once again take on a brutal 200 free/1500 free double today, though she’s the heavy favorite in the latter event. Ledecky was extremely good in heats of the 1500, putting up the #8 swim of all-time in the event at 15:35.35. It’s not totally clear how much this event double will affect her speed, but she’s got a great shot to hit just the 5th swim ever under 15:30, or even challenge her world record of 15:20.48.

China’s Wang Jianjiahe leads the battle for silver, but she’ll be right next to defending world champ Simona Quadarella of Italy.

We’ve got yet one more world record opportunity – and this one would be a massive shockwave for swimming as a sport.

Since full-body racing suits were banned in 2010, we’ve seen all three women’s relay world records fall in long course meters. But none of the three men’s relays have fallen, now standing upwards of 12 years.

The British men have a realistic chance to break through for the first men’s long course relay world record since 2009. They dominated the field last night, and James Guy once again proved his relay prowess with a 1:44.6 split in prelims. The Brits will add individual 200 free gold medalist Tom Dean and silver medalist Duncan Scott to a lineup that could have three swimmers in the 1:44s. The 7:58.55 world record relay had three 1:44s in the mix, including both Michael Phelps and Ryan Lochte.

Would’ve preferred to see Chalmers on anchor. Hope he has no trouble backing up after the 100 semis.

Surprised to see Rylov on ROC’s team. Had no idea he does the 200 free.

I had a feeling they’d use him considering he is peaking at the right time.

Teams in for the relay.

Chalmers on 2nd leg for Australia. Russia bring in Rylov.

I was hoping to see Dressel but it does seem to be a correct decision. Hope they will win medal of any kind.

USA wants to stay close to the front.

Now we need a big swim from Drew Kibler.

Dressel has a heavy load as it is, I agree with the decision.

Looking on the positive, Summer not making the 200 m final makes Team Canada’s load management for Penny easier today, since it’s got the 200 m final in the morning and then the 100 m and 4×200 m heats in the evening (local time).