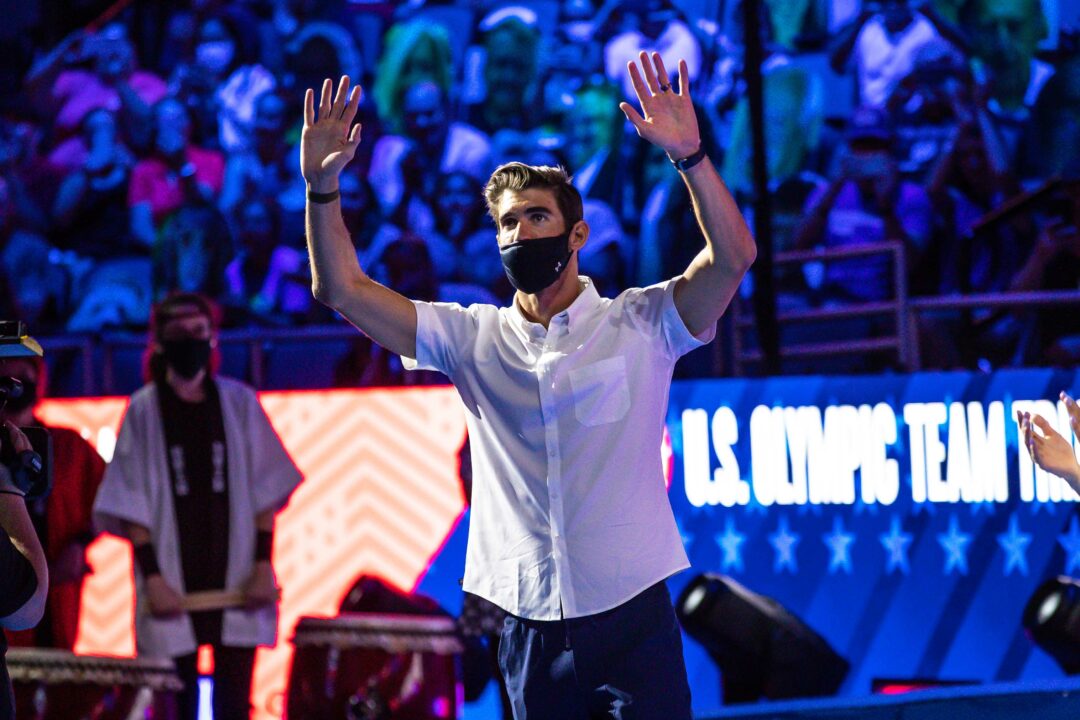 In an interview with the Today Show, 28-time Olympic medalist Michael Phelps hinted that he may not be done with his swimming career. Archive photo via Jack Spitser/Spitser Photography

Responding to a question regarding a possible comeback, Phelps did not give a definitive answer. “My wife said to Lester (Holt) in (2016), back in Rio, that if I did come back, it would be in L.A.,” Phelps recalled, referring to the 2028 Los Angeles Olympic Games.

However, shortly afterwards, Phelps turned toward the camera and stated, “I’m not coming back now! Don’t get any ideas.”

Phelps elaborated on his response, saying that he’s “completely happy” with his retirement, and that he still does get in the water from time-to-time. Phelps, a father of 3, also said, “If my boys, at some point, ask when I’m going to or why I’m not competing, we’ll see what the answer is then.”

The most decorated Olympian of all-time, Phelps competed in 5 Olympic Games for the United States. Over the course of his career, he racked up a total of 28 Olympic medals, including 23 golds.

Phelps originally retired from the sport following the 2012 Olympic Games, but later came out of retirement and competed at the 2016 Rio Olympics. At those Games, Phelps won 5 gold medals and 1 silver medal. Phelps retired after Rio and has not competed since August 14, 2016. If he were to come out of retirement for the Los Angeles Olympic Games in 2028, Phelps would be 43-years-old.

200 IM would be his best chance

Esp if he trained for it using RPT or whatever.

I understood that reference

If a 43 year old Michael could throw down a sub 55 hundred fly I’d say he would already be successful in that comeback.

Him and Boomer could make it together

and there’s nothing wrong with that in Canada and certain states.

It is LEGAL. Acceptable is another matter.

I don’t think probably means what you think it does.

I’m talking about if he were to swim this year or the next.

Possible perhaps sure, ive certainly learned not to doubt Phelps, but probably is a stretch.

Yeah but he only swam it with a taper twice after 2012, and both were 1:54’s. I mean I guess the 1:56 at 2014 Pan Pacs was with a taper maybe, but it was like 3 months after he came out of retirement, and I’d be surprised if Bowman rested him fully when they were just starting to rebuild his aerobic base. So it’s not like he swam it 8 or 10 times and only got under twice.

I mean you’re absolutely right about it being 5 years later. But if he was even anywhere close to where he was before he retired no one would touch him.

This is going to sound weird and off topic, but anti aging technology could be just around the corner. The conversation is no longer just about slowing down aging, but EVENTUALLY reversing its effects on humans (has already been done with animals in testing). If this technology becomes available in 15 years or so for humans, I wonder what it’s effects will be on sports. Phelps is simply too old to compete with the athletes of today, will we be able to say that in a couple decades? It’s fascinating to think about, and sounds like science fiction, but it could be a very real thing someday.

Sure some of them are utilizing GH! During off season

First we need a shot to reverse the effects of the jab, then we can focus on immortality.

I’m coming back in about 15 years.

wants to take the 2fly wr back

Yeah as cool as it would be, it’s not gonna hapoen