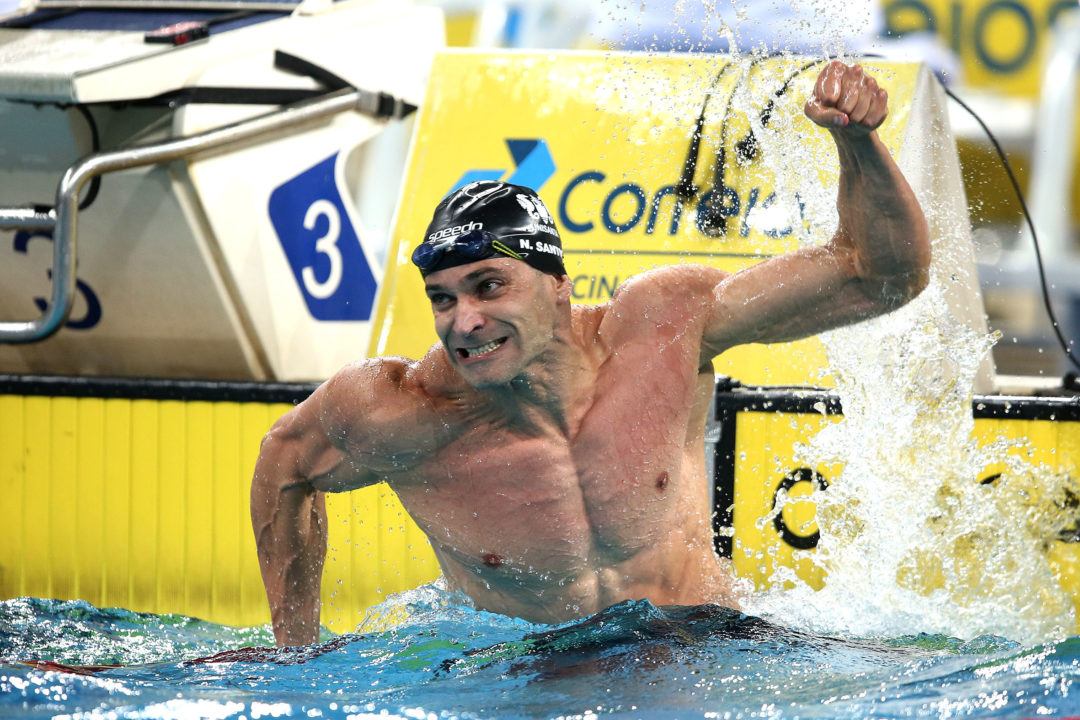 38-year-old Nicholas Santos of Brazil ended 2018 with both a World Record and a World Championship, though not at the same time. Archive photo via Satiro Sodré/SSPress/CBDA

38-year-old Nicholas Santos of Brazil ended 2018 with both a World Record and a World Championship, though not at the same time.

To start things off back in August at the 2018 Jose Finkel Trophy, Santos blasted a 22.17 to win the Brazilian national title in the 50 SCM fly, finishing just .09 off his own South American Record in the event. Santos also took 2nd in the 100 fly in 50.67, just behind Indiana Hoosier Vini Lanza, who touched in 50.17.

In October at the 2018 FINA World Cup stop in Budapest, Santos blasted a 21.75 in the 50 SCM butterfly to become the fastest man in history in the event, erasing Steffen Deibler‘s suited World Record from 2009, which had stood at 21.80. While breaking the World Record, Santos became only the 4th man ever to break the 21-seconds barrier in the 50 SCM fly, joining the likes of Deibler, and South Africans Roland Schoeman and Chad le Clos.

“their urine concentrations were within the normal range and not diluted which
meant that the Furosemide could not have been used as a masking agent.”
http://www.centrostudisport.it/PDF/TAS_CAS_ULTIMO/81.pdf

Dude had furosemide (not a performance enhancer, but a potential masking agent) in his urine once out of countless doping tests. The tests determined that the urine was not diluted, meaning the furosemide wasn’t masking anything. And they ultimately found the source of the furosemide and determined it was accidental…

…yet people are still convinced that Santos and Cielo are cheaters. If people want to keep singing that tune, at least present the facts.

— Credit to OL’ LONGHORN for the link

He is not the only one on drugs, the usa are the drug kings and queens, thats why they are hated by the rest of the world!

The FINA appeal was dismissed by CAS back in 2011 (http://www.centrostudisport.it/PDF/TAS_CAS_ULTIMO/81.pdf). Short version: independent lab found that a caffeine supplement was tainted with furosemide. None of the four swimmers were faulted. There’s pretty compelling documentary evidence in there. They were trying to target the right dose of caffeine that was allowed but performance-enhancing, without causing the GI upset that coffee gave Cielo. They tried a caffeine capsule before Maria Lenka that year, and was the only time they tested positive.

I am skeptical that he is clean not only based on his past history but also that 38 year olds cannot compete with younger individuals. Name the last male at that age that was able to set a world record in any event, let alone one requiring the highest level of strenght/power/speed. Why didn’t he do this 10-15 years ago? PHysiologically he is not getting better as things begin to detiorate after 25-30

Anthony Ervin won Olympic gold in the 50 free at age 35.

Anthony Ervin was Olympic champion at 20. Santos does not have that kind of track record and he already got caught doping before. Suspicious indeed.

Not quite WRs but what about Dara Torres Olympic silver and PB aged 41? Mark Foster first UK swimmer under 22 in freestyle aged 38? Anthony Ervin PB and Olympic gold aged 35? Track and field you have Kim Collins breaking 10 seconds aged 40

Heard lots of people talk about physical deterioration after 25-30 but maybe this should be revised given more intelligent diets, training programs etc

Makes me wonder, when we start to develop the tech to slow down aging in a few years, will it count as doping? If the body never physically deteriorated, maybe MP would have gone 1:51 low before he retired.

The mind quits before the body does.

I give you George Foreman. Highest level of strength/power/speed? Try boxing. You can add Bernard Hopkins to that list. Pretty sure they both beat the snot out of much younger opponents to become world champs. That’s a helluva lot harder than being a WR holder in the 50 fly.

You can hate all you want, he payed for his crime and his results are legit. All in accordance with the rules.

There you go Nick!!!

He cheated though. He got caught and serving your time for drugs just doesn’t make sense – you’ve still got the benefit.

I agree. I think we should follow ISL and not give plaudits and opportunities to those who have tested positive.