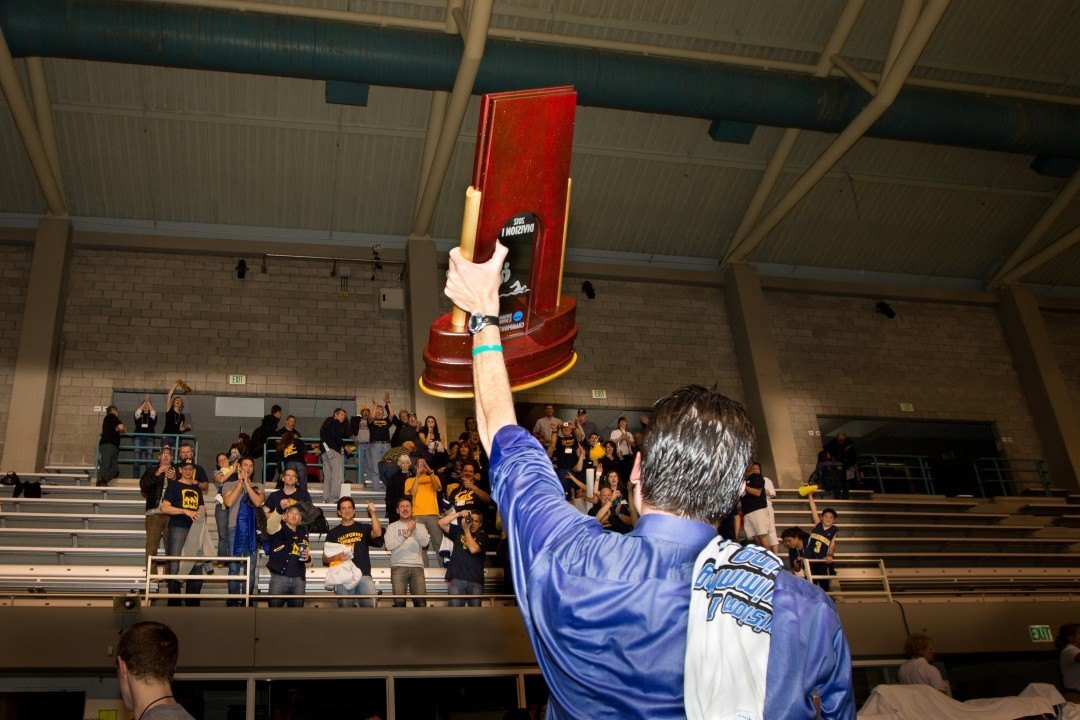 Everything went right for the Cal Golden Bears men’s team in 2014, as they rode the hot hand of a freshman to their 3rd NCAA title in 4 seasons.

Head coach Dave Durden had a masterfully-played hand for the season. Even after losing one of the great college swimmers in history Tom Shields, Durden was able to put the pieces he had left together into a title-caliber team.

As mentioned, he coach Ryan Murphy, who was definitely one of the four best NCAA swimmers in the country last season (Marcin Cieslak, Chase Kalisz, and Kevin Cordes being the other three candidates), and could make a strong case for #1 in that category with two individual titles, an NCAA Record, and 3 relay titles to boot.

Durden also got huge contributions from a transfer, Chuck Katis, who even after just a semester on the Cal varsity squad was beating his own personal bests, including by a full second in the 200 breaststroke after a tough coast-to-coast transfer.

He rehabilitated the careers of Tyler Messerschmidt, who took a year away to focus on academics before coming back to help Cal win the title; and Tony Cox, a former Auburn transfer who really became the ‘glue’ piece that Shields had been the year prior to make the Cal relays stick together.

Then there was the last day monster swim by Jeremy Bagshaw in the mile that all-but-cemented the title for Cal – a fantastic demonstration of Bagshaw’s abilities and efforts, but where a coach’s impact of having a swimmer step up in a big moment and having the confidence to swing for the fences paid off.

This was a Cal men’s team that was a true national champion. Other than divers, Cal had no weaknesses. Durden was coaching breaststrokers, backstrokers, butterfliers, sprint freestylers, IM’ers, distances freestylers, 100 and 200 yard swimmers of each, and they were all on-fire at year’s end, across all of the swimming disciplines. Often times, even national championship teams can’t boast that kind of across-the-board-depth.

Dave Durden, along with assistant Yuri Suguiyama, has built a dynasty in Berkeley, California. Just like we said in our women’s award post about Durden’s former assistant Greg Meehan, now the head coach of the Stanford women, if we were having a fantasy draft for college swimming and had to pick a men’s coach, Durden would be the first choice.

Dave’s the best coach in America right now. His enthusiasm is unparalleled and his approach is novel and innovative. Go Bears!