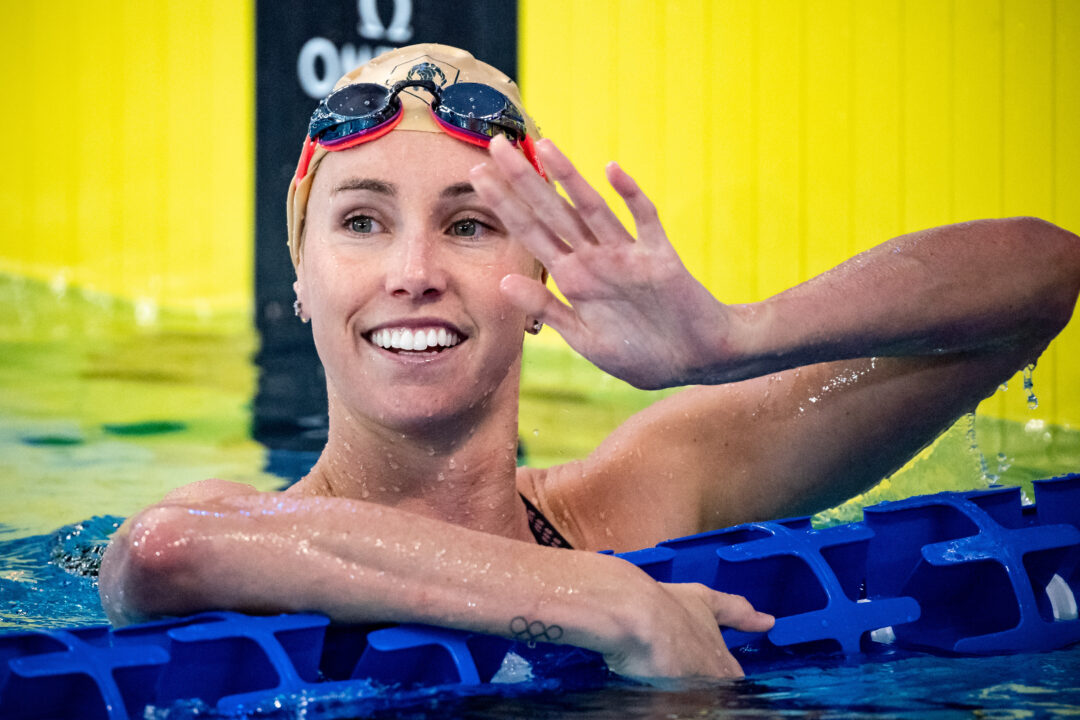 For how prolific 27-year-old Emma McKeon‘s career has been, it’s somewhat surprising the Griffith University star doesn’t appear on our list of previous Oceanic Female Swimmer of the Year award winners.

That fact simply reflects the depth of talent that’s ever-present within the nation of Australia particularly, with the likes of Cate Campbell, Emily Seebohm, Ariarne Titmus and Kaylee McKeown earning past honors.

But this was McKeon’s year from start to finish, highlighted by a monstrous performance at this summer’s Olympic Games in Tokyo.

McKeon entered the postponed competition as a medal contender across a packed schedule that included a massive 7 events.

And McKeon delivered, reaping individual gold in both the 50m and 100m freestyle events while snagging bronze in the 100m fly. As a critical component on relays, McKeon helped the Aussies top the podium in the 400m free relay, 400m medley relay and also land bronze in the 800m free relay and mixed medley.

Additionally, McKeon’s having captured 7 medals rendered her the title of most decorated Australian Olympian. She is the only Australian to have ever won 11 Olympic medals in total.

But McKeon did anything but rest on her laurels, diving right into the International Swimming League (ISL) season as a member of London Roar, while also tackling the FINA World Cup Series.

In the latter, McKeon was a one-woman wrecking ball, consistently finishing in the top 3 at each of the World Cup meets, including 2nd in Berlin, 1st in Budapest, 2nd in Doha and 1st in Kazan. Her consistency resulted in McKeon finishing as the overall World Cup winner, collecting $144,000 USD in the process.

7 medals for Tokyo and 4 medals in Rio.
Including her 11 Olympic medals. Congratulations.

Emma is FINA world swimmer of the year So this award is a foregone conclusion.

When Ian Thorpe decided to do a comeback he lived 50 minutes up the freeway from Wollongong Uni pool but had simply awful managers & advisers who dumped him in Dubai . I like to think I could have kayaked over the waterways when I saw him & offered my advice & changed history but he was way way too fast . Ian was just superb on or in the water !

Anyhow time has gone by & everything is just right that Emma is , after a very long long line of greats , the Greatest Australian Swimmer EVER.

Kaylee McKeown has been somewhat overlooked for these awards. She won two individual Olympic gold medals, set a long-course world record and finished the year with three No. 1 world rankings(the third being the 200IM which she should have swum at the Olympics). No other female swimmer can match those achievements.

Yes it would’ve been close, but Mckeon did swim the more hotly contested 50 & 100 free. But I see what you are saying with McKeown. Even Titmus has a strong argument.

I don’t agree with your argument about depth. The women’s 100BK was easily the deepest event in women’s swimming this year. Also, much is made of McKeon’s relay contributions but that’s simply a reflection of the fact that relay events are heavily stacked in favour of freestyle sprinters. Emma McKeon is a worthy winner, don’t get me wrong. My point is that it’s not a clear choice.

I did say it’s very close between Mckeon, McKwown & Titmus.
I agree that the relays favour the freestyle sprinters, but that is because, it is the quickest way to get from one end of the pool. Does anyone want to see a 4×400 free or a 4×100 Back?
Now I agree we all have differing opinions, but to me the 100 free in the premier event of the meet. Add to the fact that she also swam the decisive 100 free relay for the win & also swam Butterfly in the medley relay win

Emma swam 4 relays in three different ways (100 free, 200 free, 100 fly). If Emma was “only” a freestyle sprinter, she only would have swam two relays, the same as Kaylee. But she is also a great flyer and 200 swimmer so she got more relays. Also if she didn’t have so many relays she would have probably swam the 200 free individual and is a former medallist.

I think she’d have still skipped the 200 individual because the goal of individual Olympic gold was too important at this stage of her career and she had no chance at gold in the 200. If the 200 was at the end of the meet that would be a different story.

I think the individual LCM times of the other 2 are pretty comparable. McKeon is the second fastest in both the 50 and 100 free along with 5th in the 100 fly, while Titmus is second in the 200, 400, and 800 free, all of which have pretty legendary world records.

truly an amazing year for her. I think McKeown and Titmus had pretty comparable Olympic/long course performances but the short course season really pushes McKeon over the edge imo

That list of past winners is crazy – they all won individual medals at this years games. Incredible.(plus relay medals).

Probably 3 of the top 5 swimmers in the world right now all out of Australia. Pretty crazy when you think about population