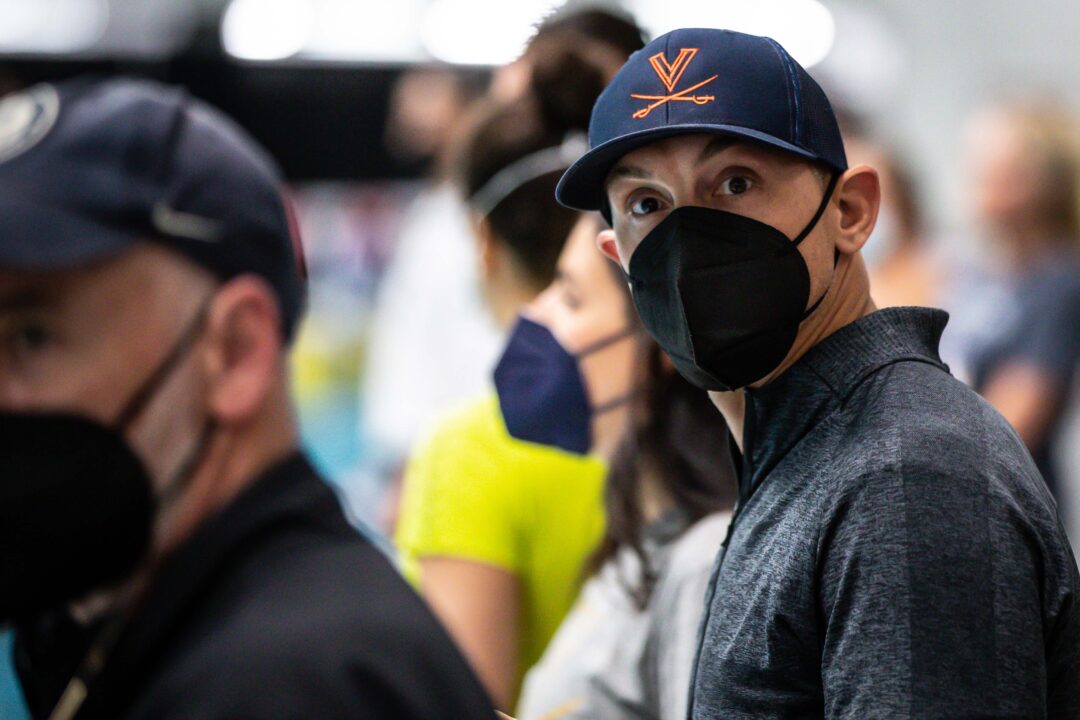 UVA became the first ACC program to have an NCAA A finalist in every swimming event. Stock photo via Jack Spitser/Spitser Photography

Todd DeSorbo is the second coach to win back-to-back NCAA Women’s Coach of the Year Swammies, having won the award in 2020 as well during the COVID-halted season. Stanford’s Greg Meehan was the first coach to win this award consecutively, earning the honors in 2017 and 2018.

DeSorbo led his Cavaliers to the NCAA team title by a 137-point margin. UVA had an A finalist in every swimming event at NCAAs, something that no ACC team had ever accomplished before. UVA also had no divers score points at NCAAs, adding to just how impressive the team performance in the pool was.

Then-Senior Paige Madden won all 3 of her events (200, 500, 1650 free) making her the only swimmer at the 2021 NCAAs to win 3 individual medals. Madden also helped the UVA 800 free relay to victory on the opening night, while Alex Walsh won the 200 IM, and Kate Douglass won the 50 free. DeSorbo’s squad started the meet absolutely on fire, winning 4 of the 6 events through the first 2 days of the meet, and finishing 2nd in the other two (200 free relay and 400 medley relay).

DeSorbo’s team also won their 3rd ACC team title in 4 years, beating NC State out by 169 points. At ACCs, his Cavaliers broke the NCAA and American Records in the 200 medley relay, becoming the first team ever to go under 1:33 in the event.

The UVA squad was exceptional, particularly in freestyle. The Cavaliers ended the 20-21 season with the top times in the NCAA in the 50 free, 200 free, 500 free, and 1650 free. Kate Douglass was also the fastest 200 IM’er in the country last season.

UVA landed a truly astonishing 23 top 10 performers last season, including 5 #1 performers and 5 #2 performers. DeSorbo also had 9 different swimmers crack the top 10 last year, by far the most of any program.

DeSorbo won our US Coach of the Year honors for his accomplishments in the NCAA season, as well as his swimmers’ performances this summer. 4 of DeSorbo’s swimmers went on to win medals at the Tokyo Olympics.

what a chad fr