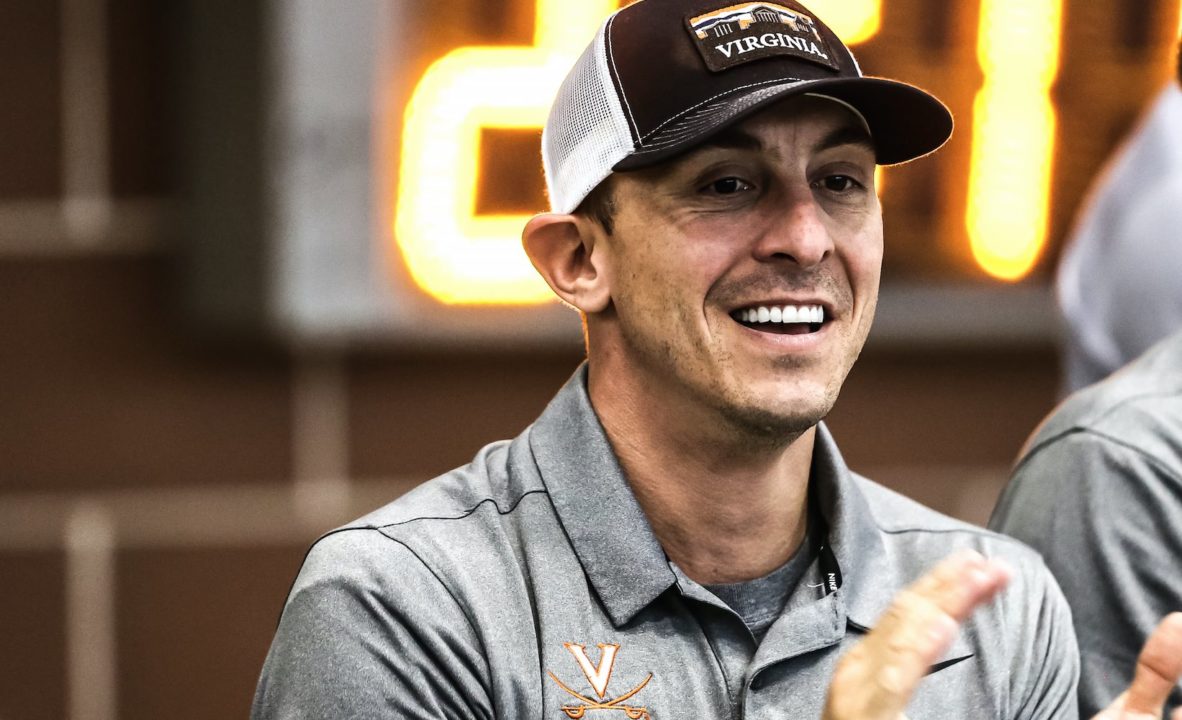 There was no NCAA Division I Swimming & Diving National Championship meet in 2020, but if there were, Todd DeSorbo had his team lined up to win - on the back of a freshman superstar. Current photo via Virginia Athletics

The University of Virginia women ended the 2019-2020 NCAA season as ACC Champions, defeating 2019 champion NC State to win their 16th team title and the 2nd in Head Coach Todd DeSorbo‘s career. DeSorbo has been head coach at UVA since 2017, and in his short tenure he has helped the Cavaliers become both a conference and national powerhouse, and has recruited some of the most talented high school swimmers in the country to UVA.

With the 2020 ACC Championships title, the Cavalier women tied UNC for most women’s team wins in conference history. UVA’s final tally of 1,492.5 points was also the most points ever scored by a winning team, women’s or men’s, at the ACC Championships. Then-junior Paige Madden won the 200, 500, and 1650 freestyle events at ACCs, as well as contributed to Cavalier victories in the 400 and 800 freestyle relays, making her the only swimmer to win 3 individual events. Madden, who was the 2018 ACC Champion in the 200 backstroke but opted for the 1650 in 2020 instead, showed that both her versatility and DeSorbo’s strategy were on-point when she won the mile on the final day of the meet. Madden was awarded Swimmer of the Meet honors and later named the 2020 ACC Swimmer of the Year. DeSorbo, meanwhile, was named the 2020 ACC Women’s Coach of the Year.

UVA finished the 2019-2020 season with other swimmers, most notably then-freshmen Ella Nelson and Kate Douglass, ranked 2nd and 3rd in the nation, respectively, in the 200 breaststroke. Douglass also finished the truncated season ranked 1st in the 200 IM with the fastest time ever done by a freshman and 4th in the 100 fly.

Despite not having an NCAA Championship meet to swim at in 2020, the Cavaliers came back strong in the fall putting up fast swims every time they raced. At the UVA intrasquad, Douglass became the fastest woman in history in the 100 IM, clocking a 52.48 in the 100 IM.

In addition to Douglass, UVA is strong in every discipline, though their breaststroke and freestyle specialists in particular stand out at the national level. Alex Walsh, Alexis Wenger, and Anna Keating are all currently ranked 10th or higher in both the 100 and 200 breaststroke, with Ella Nelson also top-10 in the 200. Paige Madden ranks 1st in both the 200 and 500 freestyle and 2nd in the 1650 freestyle. Abbey Harter and Jessica Nava both currently rank within the top-10 in both the 100 and 200 butterfly, while Alex Walsh and Caroline Gmelich sit 9th and 12th, respectively, in the 100 backstroke.

Though technically “off topic,” it’s worth mentioning that DeSorbo is head coach of the women’s and men’s teams at UVA, and that in 2017 the UVA men scored 0 points at NCAAs. One year later in 2018, the Cavalier men finished 29th with 19 points, and then in 2019 the UVA men finished 10th with 106 points.

Yeah baby HOO HYPE WAHOOWAH 🔶🔷🔶🔷🔶🔷 WERE NEXT UP WATCH OUT

I’d do bill Dorenkott as an honorable mention too, Ohio state women crushed the big ten and no one expected that.