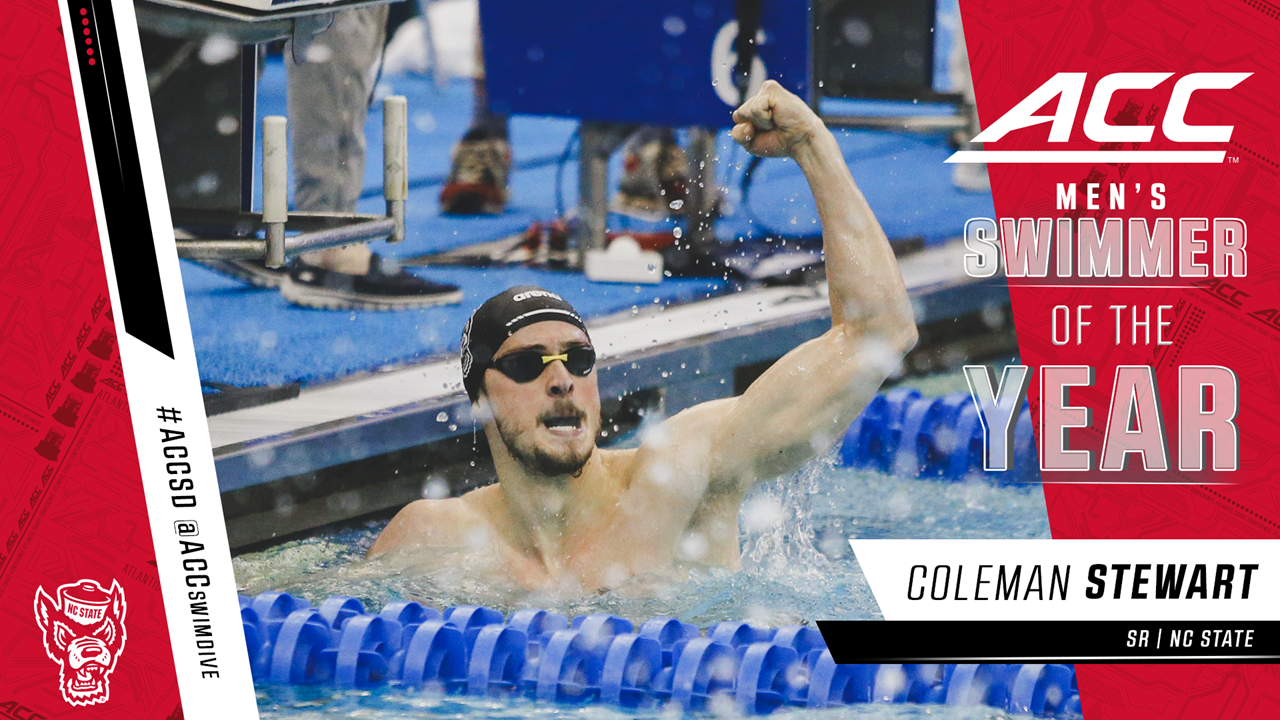 Coleman Stewart of North Carolina State and Paige Madden of Virginia have been named the ACC Swimmers of the Year for... Archive photo via The ACC

Coleman Stewart of North Carolina State and Paige Madden of Virginia have been named the ACC Swimmers of the Year for the truncated 2019-2020 season. The awards mirrored those handed out for Most Valuable Swimmer at the ACC Championship meets.

Stewart, a senior, ended the season as the country’s top swimmer in the 100 backstroke thanks to his ACC Record of 44.04 done at the ACC Championship meet. That would have made him the top seed at the NCAA Division I Championship meet that was canceled. He won ACC titles in the 100 back and 200 back and was a member of the winning 200 medley and 400 free relay teams.

Their coaches, Braden Holloway of NC State and Todd DeSorbo of Virginia, were named the Men’s and Women’s Coach of the Year, respectively, while Notre Dame’s Jack Hoagland and Virginia’s Kate Douglass received Freshman of the Year honors.

In February at the ACC Championship meet, the NC State men won their 6th-straight title, topping the runners-up from UVA by 161 points. In the women’s meet, the Virginia women dominated, with a score of 1,492.5 that is the most points ever scored by an ACC Championship-winning team, men’s or women’s.

Stewart was named the Most Valuable Swimmer at the 2020 ACC Men’s Swimming & Diving Championships after earning Co-Most Valuable Swimmer honors last year. The senior from York, Pennsylvania, won the 100 and 200 backstrokes for the second straight year, and was part of the first-place 200 medley and 400 freestyle relay teams.

Madden was voted the Most Valuable Swimmer at the 2020 ACC Women’s Swimming & Diving Championships. The junior from Mobile, Alabama, captured five gold medals in the event, placing first in the 200, 500 and 1650 freestyle events, and was also on the first-place squads for the 400 and 800 free relays.

A senior from Chapel Hill, North Carolina, Brady was named the Most Valuable Diver at this year’s ACC Men’s Swimming & Diving Championships. The Wolfpack senior was a finalist in all three diving events, winning the 3-meter springboard competition.

Hailing from Toronto, Ontario, Carlson earned her third straight Most Valuable Diver nod at the 2020 ACC Championships. The Seminole senior won the 3-meter and platform competitions and placed second on the 1-meter springboard.

Hoagland earned three All-ACC honors at the 2020 ACC Championships. The rookie from Albuquerque, New Mexico, placed second in the 1650 freestyle and 400 individual medley, and finished third in the 500 free.

A native of Pelham, New York, Douglass medaled in seven events at the 2020 ACC Championships. The Cavalier rookie won the 100 butterfly and 200 individual medley events, and as part of the first-place squads for the 200 and 400 freestyle relays and the 200 medley relay. Douglass’ times in the 200 IM (1:51.36) and 200 medley relay (1:34.27) were conference records. She was also part of the second-place 400 medley relay squad and placed third in the 200 breaststroke.

Holloway led the Wolfpack to its sixth consecutive ACC title this past season. The Wolfpack men captured 13 total medals at the ACC Championships, including seven gold medals.

Ableman guided the Hurricanes to two golds, a silver and a bronze at the ACC Championships, placing at least one diver in the finals of each event. Miami became the first team ever to sweep the men’s platform event when David Dinsmore, Zach Cooper and Max Flory went 1-2-3. Flory also took third in the 3-meter competition.

Proctor guided Florida State to a pair of golds and a pair of silvers at the ACC Championships. In addition to Carlson’s two diving wins and second-place finish on the 1-meter, the Seminoles’ Ayla Bonniwell placed second in the 3-meter competition.