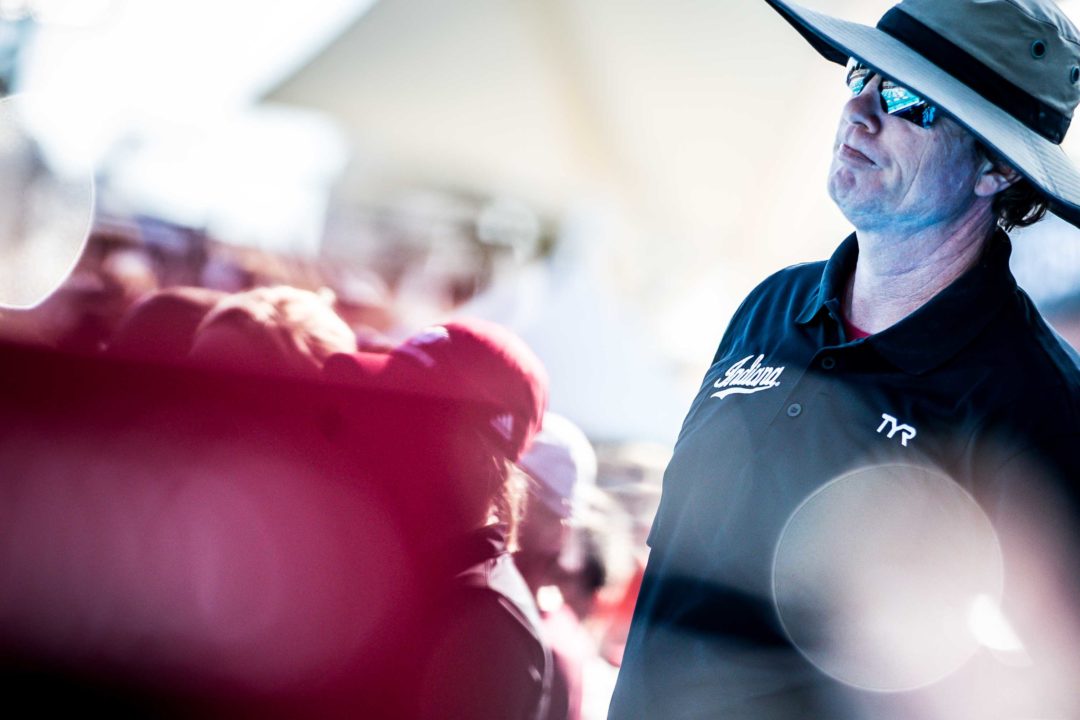 Looze addressed a number of topics surrounding the abrupt end to the 2019-20 NCAA season, and the Olympic postponement, in a conference call Friday. Archive photo via Jack Spitser/Spitser Photography

With the head coach role opening up at USC, his alma mater, Indiana head coach Ray Looze‘s name quickly emerged among swimming circles as a potential candidate. In a conference call Friday, however, he said he is not pursuing the position.

“Although my alma mater means a great deal to me and I wish that they’re as successful as possible, I’ve been at Indiana 18 years now and I’m excited about where we’re going as a program,” Looze, the 10-time Big Ten Coach of the Year, said. “It’s one of the best programs in the country, presently, and we’ve got unfinished business here. I think the institution and the kids and coaches would really like to bring that national title back – so I’ll be staying here.”

Looze also addressed a number of topics surrounding the COVID-19 pandemic and the cancellation of the 2020 NCAA Swimming & Diving Championships.

Like most teams, the Hoosiers have struggled to find pool space – Looze said “98-99%” of his swimmers who are dispersed around the country don’t have access. Looze floated the idea of sending swimmers cords, as well as obtaining wetsuits to encourage open water workouts.

A small group of professional swimmers secured a local private pool and are there three to four times per week. Lilly King, for example, is doing CrossFit three times per week and swimming four times, Looze said.

Looze, the United States women’s head coach for the 2018 Pan Pacific Championships, thinks that 2021 Worlds will happen almost directly after the Olympics. “I have a feeling a lot of those athletes will want to – and need to – do both,” he said.

Indiana is holding weekly virtual team meetings for its collegiate swimmers – “Kind of like film sessions, if you will,” Looze said. “At least to keep their minds sharp and thinking about technique, so when we return to the pool it’ll help ready us.”

“Most” outgoing Hoosier seniors have opted to retire as a result of Olympic Trials being delayed, Looze said. Among those to retire are Cassy Jernberg and All-American Shelby Koontz, while 13-time All-American and Egypt native Mohamed Samy will continue swimming and likely sign with an International Swimming League team, according to Looze.

“I’ve talked to a lot of coaches on how to counsel our kids on that,” Looze said. “I’m a big believer in moving on in life – not ‘hanging on to hang on.’ That’s just my thought process. Ultimately, it’s a personal decision, it’s up to them. It’s a bummer how it ended for a lot of the seniors. But life’s not fair and this was something bigger than anybody could have imagined, and continues to get bigger. Missing a meet is just such a minor thing now when you’re watching things unfold.”

When it comes to the discussion around giving affected student-athletes an additional year of eligibility, Looze criticized the NCAA’s approach to spring sports. The association voted to allow those student-athletes another year but said it’s up to schools to figure out how to allocate scholarship money.

“I don’t think it’s fair to institutions,” Looze said. “The NCAA has cut a tremendous amount of funding to its member institutions, and then gives spring athletes another year and says ‘It’s up to you to pay for it, and we’re not going to help you.’ That’s not working with your institutions.”

“I’m glad I don’t have to deal with it — I’m relieved. That would have been a mess,” he added.

I’m hearing Jeremy Kipp is a done deal at USC, leaving Northwestern. What are you guys hearing?

so…. who is taking over USC?

^^This^^ I imagine most schools are on a hiring pause, but someone has to know SOMETHING useful!

Re-assign Clay Helton. For the good of humanity

IU has had a mess there in the last few years with coaches. Ray can’t seem to keep it together

Saw the video of the IU swimmers in the 2 lane lap pool. Good job social distancing.

Ray is a great coach and person. Glad he is happy at IU! Who who want to move now??? Who would want to move to LA now????? Good golly – quality of life is pretty darn great in Bloomington and he has shown that he can flat coach. Wise choice to stay.

34
-45
Reply
That guy
Reply to  Ladyvoldisser

If he’s such a great person, how come he can’t keep a staff in tact?

Yeah, it really reflects poorly on him that his assistants keep getting head coaching jobs.

Please…many came to have their careers die!

He just happens to hire people who get fired, quit or leave. He hires live grenades. USC ain’t having none of that. For all USC athletics went through with the college admissions scandal, I’d be very surprised if they took a chance on someone who’s had an associate head coach fired for intimidation, hired another coach who was let go from his former college position for allegedly had an extramarital affair with another coach, and hired another coach who just up and retired right before the conference championships. Tell me about the quality of life in Bloomington in January when I’m on the Santa Monica beach.

Ray also had a coach he was about to let go, but that asst. was somehow able to find himself a new host elsewhere. Maybe basic background checks would be helpful.
Newport is also very nice this time of year. Need a wetsuit, but at least I can still surf.

People who think Ray isn’t a good man have clearly never met or talked with him. He has a drive to win that might rub some the wrong way, but I would compare him to Nick Saban (who also has a lot of assistants leave). Bottom line is if you have a desire to win and improve, IU is a great place to go.

I like Ray a lot, but he is not a Nick Saban.

I know him…he’s not a great guy…ask a past swimmer or two.

Lots of “stories” are out there about Ray when a high school kid says no to Indiana. Great guy? Only if you say yes.

Yes, stories are exactly that…stories that get embellished and blown out of proportion. There are all kinds of recruiting stories about schools all over the place. Bottom line, those of you who say these things have probably never spent any significant amount of time with him. Just show some respect for someone who took over a storied program that scored no swimming points at NCAAs in 2002 and now has won many conference titles and finished in the top 3 nationally. Oh yeah, you are currently talking to someone who swam for him here.

Dude, I was recruited by Ray. Told him no. He was not kind nor cordial. Completely unprofessional.

It’s also fair to show disrespect for factual things like his hiring some questionable (or worse) characters. You can respect Bobby Knight for his coaching wins, too, but you can still think he’s a jerk who harmed people.

My son said ‘no’ to Ray and he and Cory and the staff were professional and supportive and genuinely wished him well. I was definitely more impressed by IU through the recruiting process that I expected to be after reading SwimSwam comments. The school, program, staff, swimmers, and alumni were all very impressive.