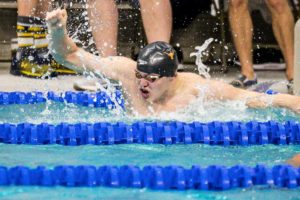 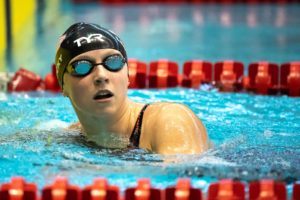 Coleman Stewart comes from a family surrounded by swimmers. His father, Andy, swam for Bucknell; his sister, Sada, swam for Princeton and his brother Noah swims for Dartmouth. It was inevitable Stewart would find himself on a similar path. After being name Maryland Swimmer of the Year in 2014 and 2015 while training at North Baltimore Athletic Club, he moved to North Carolina to join the NC State Wolfpack.

Stewart made an immediate impact during his freshman year on the Wolfpack team that spent most of the season as the top ranked team in the country. He made headlines over the Christmas training period for posting a 43.9 100 yard backstroke from a push in an old Jaked suit.

At his first ACC Championships Stewart helped NC State to win the conference by adding points for the team in each of his events. To start of the week, he won gold as a member of the Wolfpack’s 200 yard medley relay. He then picked up a bronze medal in the 100 yard backstroke in 55.99. He also finished 5th in the 100 yard butterfly and 11th in the 200 yard backstroke.

Following a successful freshman season, Stewart came back faster than ever. At the ACC Championships, Stewart got second in the 100 butterfly behind his teammate Ryan Held. He also won the 100 backstroke with the time of 44.54 which was the fastest time in the nation. On the last day, Stewart touched the wall first in the 200 backstroke with a new best time of 1:39.56. To finish off the meet, he was a part of the 400 freestyle relay which broke the American Record. Their time of 2:45.69 was almost five seconds faster than Florida State’s relay that ended up second.

On Friday, Stewart had a tough double and he entered the 100 butterfly as the 11th seed and the 100 backstroke as the seventh seed. After a disappointing morning swim in the 100 butterfly, Stewart returned to finals and won the B-final with a time of 44.84. He used the momentum to his advantage and won the NCAA Championship title in the 100 backstroke later in the session. He beat Texas’ John Shebat by only 0.01 seconds with a time of 44.58. His teammate Andreas Vazaios took third with the time of 44.81. Stewart was also a part of Wolfpack’s record breaking 400 freestyle relay where they destroyed the previous American Record they had set a few weeks earlier at the ACC Championships. They won the relay in 2:44.31 and Stewart anchored the relay with a 41.62. Wolfpack got fourth overall for the third year in a row.

At WUGs in Naples, Italy, Stewart won his first international medal. He began things in the 50 fly, qualifying for the final and finishing 8th overall in 24.00. In the 100 fly, Stewart touched for 3rd in 52.11, a new best time and good for a bronze medal.