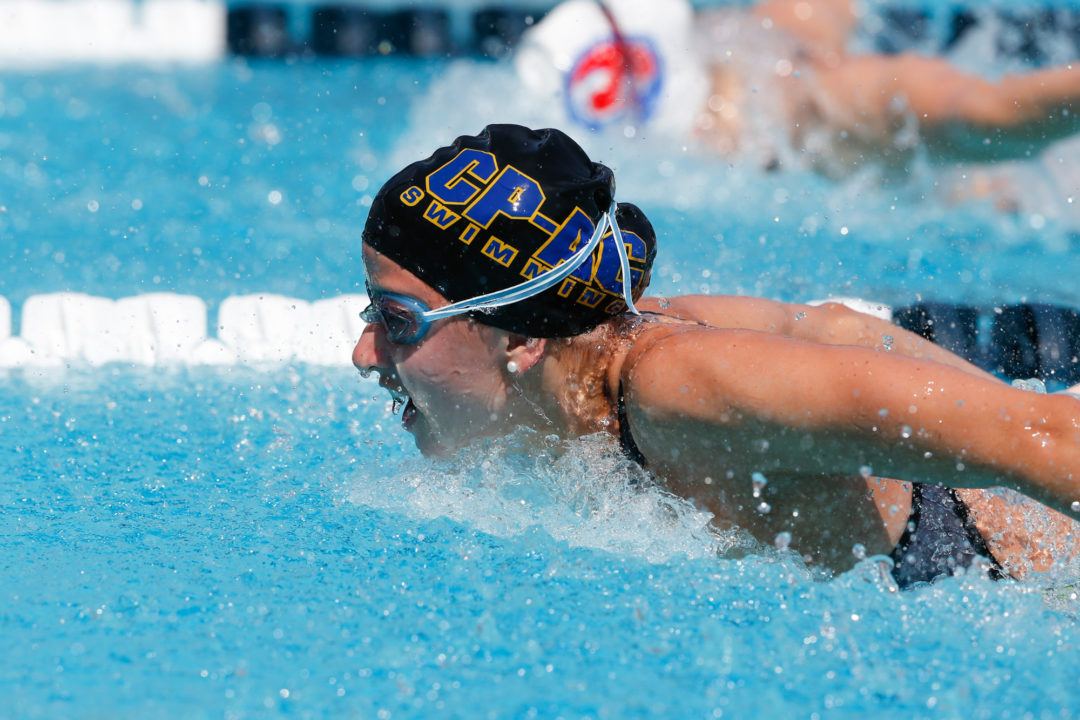 The #1 class this year will be led by the #1 recruit, Kate Douglass. Check out our top 4 incoming NCAA classes for this season. Archive photo via Tim Binning/TheSwimPictures.com

Here are the classes ranked 4th through 1st:

It doesn’t hurt to have the best backstroker in the class incoming, and it’s a snag for the NC State program when many speculated that a late commitment announcement meant Katharine Berkoff might go for an Ivy League school or Stanford. Berkoff will join the Wolfpack, though, hopping on board just as NC State record-holder in both backstrokes, Elise Haan, is out of eligibility.

The roster for 2019-20 was recently put online, listing former Oklahoma Baptist (D-II) sprinter Victoria Fonville. She’s a senior, so that devalues her significantly, but at 22.3/49.2 she’s a great sprint pickup who will give the Wolfpack another option for sprint relays. She’s also been 1:02.6 in the 100 breast and has split 23.5 fly on the medley relay.

This is the most powerful class of freestylers in the country, especially in the 200/500 free range.

In the NCAA, with relays being so important, this class brings in mighty potential in the areas which can be the most fruitful at NCAAs. The Longhorns just graduated relay piece Anelise Diener, and they only have one season left with 50/100/200 freestyler Claire Adams, so this incoming group is crucial to ensure no sprint gaps due to graduation losses. Essentially, there’s about the same amount of 50/100 sprint speed as NC State, but the Longhorns have immense 200/500 depth incoming that the Wolfpack does not, as well as versatile talents like Pash and Smutny who can do more than one thing.

This group doesn’t have any eye-popping sprint stroke talents (don’t be surprised to see Pash and/or Leibel make gains in sprint fly), but the wealth of freestylers is an undeniable asset, and Pash is a true Swiss army knife of a talent.

In light of outgoing American record-holder Lilly King and the sprint transfers out of the program, IU has assembled an impactful incoming group to combat their specific losses.

Out of just four sub-1:00 breaststrokers in the class, only Emily Weiss and UGA’s Zoie Hartman have been quicker than 59.0. And with Hartman at 58.9, Weiss’s 58.4 makes her the absolute, uh, class of the class. She would’ve placed fifth at the 2019 NCAA Champs in the 100 breast, and with King (the champion) and Delaney Duncan (the 2019 runner-up) graduated, Weiss will be right in the mix for an NCAA title as a freshman. While her 200 falls off a bit (2:10.2), she just broke through in long course with a 2:27.3 at the 2019 Summer Nationals. Even so, she’s right off of NCAA invite range, and with that long course speed she’s likely to be able to have it work out in yards.

Addressing the sprint exodus (current sophomores Ileah Doctor [Nevada], Morgan Scott [Alabama], and Julia Wolf [Alabama] all left IU this off-season) are newcomers Cora Dupre and Ashley Turak. Dupre is very strong across three distances: she’s 22.4 in the 50, 48.9 in the 100, and 1:45.2 in the 200. Turak, at 22.10 in the 50 free, is actually the second-fastest sprinter in the 50 free in the entire class nationwide. She’s also 48.7 in the 100 free, and the two of them are huge new breaths of life into the IU sprint group. Turak is faster than the three outgoing sprinters in the 50 and 100, and Dupre is faster at all three distances than Wolf and Scott (Doctor was 22.19 in HS in the 50).

Historically, the Hoosiers haven’t had anyone under 22.1/48.5, ever (as far as we could tell). So while their program departures are big losses, Dupre and Turak could end up setting school records as freshmen.

One other key piece is in-state product Carla Gildersleeve. While she’s been 1:49.4 in the 200 free, her fly strength has the most potential here, as she’s been 53.8/1:58.2 with a 2:00.7 IM to work with as well. Divers Carmen Hernandez and Zain Smith bring a little more to the table, and Smith is the reigning Michigan D1 state champion.

After pulling in the 11th-ranked class last year, Virginia’s time has come with our top-ranked class led by #1 recruit Kate Douglass.

Rounding out the class is one more sprinter, Katie Cronin, at 23.0/50.4 in free, along with divers Jennifer Bell and Charlotte Bowen. Bell is actually from Pelham Memorial High School, like Douglass, and was last year’s NY HS runner-up in diving. Bowen placed fifth at the 2019 CIF-SS D1 Champs.

Fast riser to watch: Douglass has made inroads in different disciplines over the course of her young career, from making the 2016 Olympic Trials in the 200 breast as a 13-year-old (as did Nelson), to developing as a sprint freestyler and IM’er, to her latest surge in butterfly. Almost all of her bests are from the last year or so, and this summer further solidified the progression she’s on.

Texas also signed two of the top high school divers this year. Jordan Skilken and Janie Boyle are top signees. Both are regular finalists in USA Diving. Boyle is the two time Ohio State champion, setting a state record in the 2019 State Meet. They will be excellent additions to the Longhorns.

One of the best schools missing from these recruit rankings is Wisconsin…not even an honorable mention. That said, their 2020 recruit class looks pretty solid so far.

We couldn’t write an HM for every team (and there were teams like Tennessee that almost made it in), unfortunately. Though, Wisconsin’s incoming class pales in comparison to next year’s class which is headed by Phoebe Bacon and Kaylyn Schoof. That class will probably make the top 12 if not the top 8, depending on them getting one or two more quality adds or any improvements from their 3-4 solid gets behind Bacon.

Genuinely don’t see what you’re seeing in the 2019 class, though… I’m only seeing 4 commits on CollegeSwimming.com on the women’s side for this coming season, and only one is under 10.0 index points (the Canadian breaststroker Elizabeth Moore). Mara Newman is a nice transfer pick… Read more »

No, I was agreeing with your analysis.I was just surprised that they had such a tough recruiting year. And yes, it seems next year will be much better,

Ah, gotcha. Yeah they did, quiet recruiting season for men and women both. They already have some good pickups for the men’s team, too, for 2020, though.

Will you be ranking the top programs heading into the season like last year?

We will! Those who subscribe to the magazine have already seen a preview, though there will be some shifting based on last-minute redshirts.

After seeing everything laid out in detail…UVA is well ahead of #2. Its not even close…

I got ahead of myself and started mapping out (way too early) the class of 2020… the class itself is insane and UVA/Stanford are so far ahead of anyone else. But it’s early days.

This is funny… not your comment, Karl… just that its so much love for and nothing against… but any other comment that says anything good about UVA gets so many down votes…. maybe it’s the stanford mention you put in there that cancels out the uva mention…..

UVA only had three seniors at ncaas. None scored individually, eddy was on the free relays but they have plenty of talent to fill those spots. If this class develops well and everyone keeps improving (which Desorbo has shown he can do) they could win ncaas

It definitely has more “star power” or top end talent. That class has 2 national team girls in it, this year’s class had 0.

Their chances only increase with the next class–Emma Weyant, Alex Walsh, Anna Keating, and Abby Harter.

I’d say watch out for NCAAs 2022 — that’s when this current incoming class will be juniors and the 2020 class will be sophomores. You could say 2021, but sometimes freshman swimmers struggle with the conf/ncaas double

Can’t wait to see how everything shakes out at ACCs and NCs!

Great work on all these class rankings, Karl/Swimswam! Very well-researched and a pleasure to read.

Thank you! I need to give credit to Jared Anderson, who did a lot of the foundational research to help us get a good outline of the rough top 15 so that we could deliberate from there.

Also would like to note that it’s pretty interesting the top 4 is lacking both Pac-12 and SEC representation. We know the ACC is rising, and there is new coaching blood in the B1G. I think in five years, we could have a very different landscape.

These rankings were fun to do so I’m happy that they are read & enjoyed!

Might shake things up causing the ACC and B1G becoming a more competitive conference meet.

Aren’t they already the most competitive or fastest from top to bottom? or at least 1-16 or 1-24?

Whaaa about the Coonskin girls from Tennessee? Distappointed they not on any list. Hoping they get 2 or 3 great divers so we stay in the top 10.

I’m surprised Tennessee isn’t on the list as well, thru seemed to get a lot of decent transfers too I think

Volunteers are about to start rising on these lists with Josh Huger taking the recruiting coordinator position! Mark it down!

It’s not odd if you consider the fact that they wrote the articles in groups of 4…of which 12 is a multiple of.

At least UT is the Goliath of the SEC & a national powerhouse in football.

Also wondering where Tenn’s class stacks up. Hoping their recruiting picks up again soon! Any chance we can snag Gretchen Walsh?