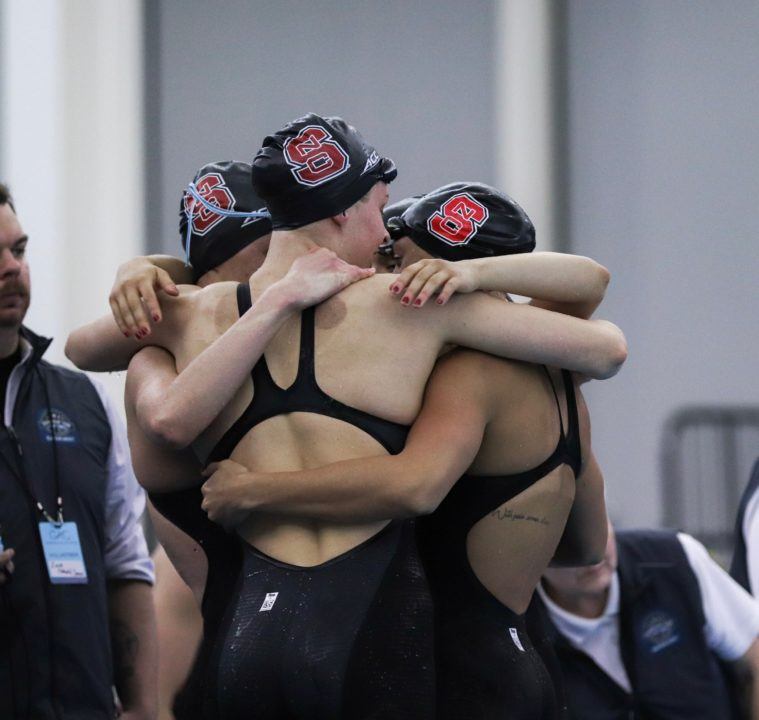 Fonville has been 22.3 in the 50 free and 49.4 in the 100 free, bringing in impactful sprint speed to the Wolfpack program. Current photo via Allie Fogleman

Hawaii, Maine, Missouri, Nevada, and Oklahoma could all see pools reopening next month, based on each state’s plans for a return from coronavirus quarantine.

As pools reopen after COVID-19 pandemic shutdowns, we’ll track each state’s opening dates and guidelines for reopening in our index.

OBU recently lost their head coach, Sam Freas, who died shortly after his 72nd birthday this spring. He was the only head coach of the OBU program, which was created in 2011, and he helped lead both the men’s and women’s teams to a fifth-place finish at the 2018 NCAA D2 Champs in their D2 debut after starting off in the NAIA.

In her one season of eligibility left with the Wolfpack, Fonville is an intriguing sprint addition. She could find herself on relays with the Wolfpack’s top sprinters Ky-lee Perry, Kylee Alons, and Sirena Rowe, especially in the 200 free relay, with the 50 free being her best event. Fonville has also been 23.57 swimming fly on the medley relay, too, and she has potential in breaststroke.
If you have a commitment to report, please send an email with a photo (landscape, or horizontal, looks best) and a quote to [email protected].

Because…. of course she did

Well…I’d like to find something wrong here or point something fishy out, but I can’t in this case. The move actually makes sense. Coaching change (sadly from death), going from a kind of unstable program to a very stable one (coaching wise), top sprinter going to a top sprint program, going from a mid west conservative baptist school to a southern (majority) conservative public school. Maybe you could say why not finish your last year where you started, but I think that is a weak to very weak argument. Plus, not many programs would take a sr transfer. Maybe you know something I dont, but from the outside this seems to make sense… unless that is what you were saying.

More fun to sit back and watch you debate yourself….

Exciting for Victoria and the WOLFPACK!