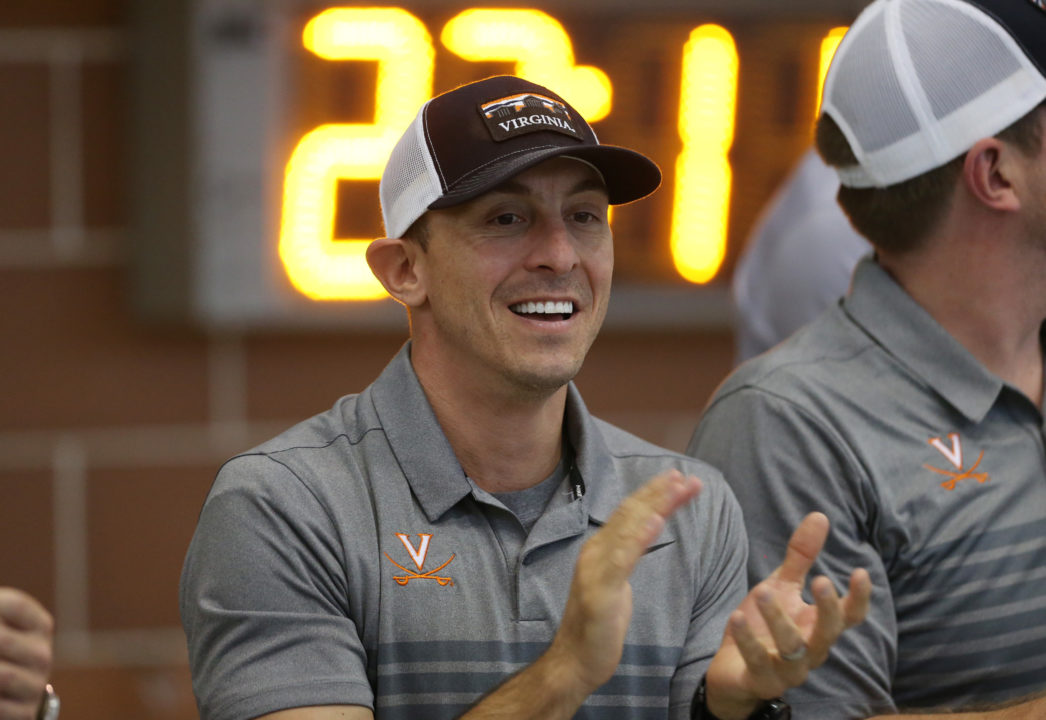 Todd DeSorbo, head coach at the University of Virginia (UVA), is the recipient of the 2021 Swammy Award for US Coach of the Year. Simply put, DeSorbo and his swimmers had an impressive year full of swims, wins, and medals.

Then, there was the 2021 NCAA Women’s Championships where the Virginia Cavaliers won their first national championship in school history. UVA had an “A” finalist in every individual event and won six titles, the most ever by an ACC team. Twelve Cavaliers were named to CSCAA All-America Teams: 10 to the first team and two to the second team. They were also the first ACC team, men or women, to win an NCAA title. DeSorbo also led the men’s team to ninth place at the 2021 NCAA Championships, their highest finish since 2011 where they finished eighth.

On the women’s side, DeSorbo coached Paige Madden to three individual titles in the 200, 500, and 1650 freestyle. Kate Douglass claimed gold in the 50 free and two silvers in the 100 butterfly and freestyle, earning seven first-team All American honors. Alex Walsh won the 200 IM and placed fifth in both the 200 freestyle and breaststroke.

Those three swimmers then competed at the Tokyo Olympics alongside post-grad Catie DeLoof, who trains at UVA, and current UVA first-year Emma Weyant, who deferred her freshman season to prepare for the Olympics at home with the Sarasota Sharks.

DeSorbo was also selected as an assistant coach for Team USA.

All four DeSorbo-guided swimmers brought home medals from Tokyo. The individual medals were won by Walsh, and Douglass. Madden helped guide the 4×200 freestyle relay to silver, and DeLoof earned a bronze for swimming in the heats of the 4×100 freestyle relay.

And to close out the year, we saw Madden, Douglass, and Weyant win a combined eight medals at the 2021 FINA Short Course World Championships. Douglass continued her stellar year by winning five medals herself. She first won gold in the 4×100 freestyle relay, then silver in the 4×50 medley relay. On Saturday, she swam the butterfly leg in the prelims of the mixed 4×50 medley relay, earning a silver medal for her effort. In her only individual event, the 200 IM, Douglass finished third. She also anchored the gold-medal-winning 4×50 freestyle relay.

Madden, who graduated from UVA in May 2021, won two medals. She took home bronze in the 200 freestyle and silver in the 4×200 freestyle relay. Weyant swam that relay in prelims and won a silver medal for her part as well.

why do you got to pit two baddies against each other!? 😩😩

No mention of Reese? Surprising

DeSorbo just has fast recruits. Coaching is questionable and shows lack of knowledge

Won’t be a contender if they use underwater cameras.

All the UVA breaststrokers fly kick. Will that ever be called?

Interesting that Eddie is pretty much considered the best but hasn’t won US coach of year recently.

Todd and staff do a phenomenal job at UVA.

Eddie is still getting it done at the college level, no doubt. But, his athletes’ national/international results lately haven’t been as good as they once were. That’s partially because he’s not training as many pros, of course, but maybe the focus has become too much on the college stuff? Old age he’s slowing down to give full energy year round?

I dunno, but Reese-trained swimmers I don’t think won a single medal in Tokyo…scanning results I can’t think of any. I think his only individual qualifier was Townley, who was 12th in his only individual event. He had 2 swimmers on the finals of the 800 free relay – but that relay didn’t medal. Am I missing anyone?

He got those tasty scrumdidolyocious ears :)))

Aitken should have won! Weyant wasn’t at UVA and Alex Walsh’s top time out of High School would have made the US team and still medaled

And madden was coached by Blaire. Never enough credit given to club coaches who actually develop talent.