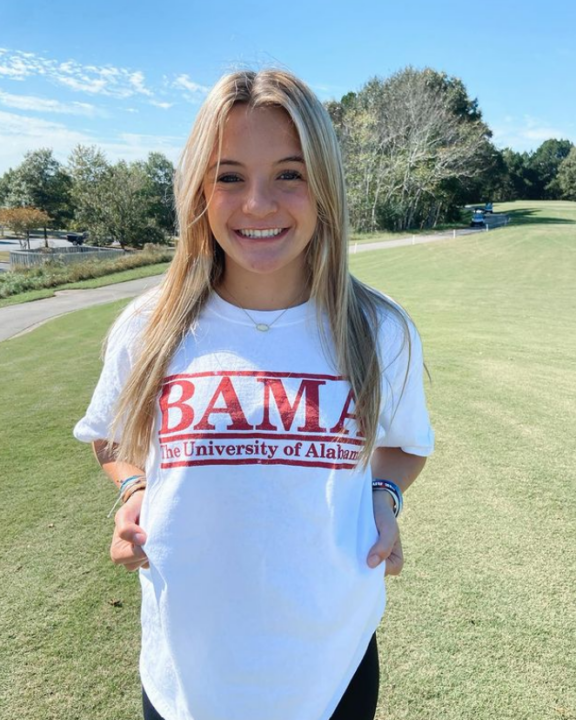 Ella Jones of Suwanee, Georgia, has verbally committed to the University of Alabama beginning in fall 2023. The high school junior still has time to train before then, but already boasts times that would score at the SEC Championships.

I am beyond excited to announce my verbal commitment to continue my athletic and academic career at the University of Alabama!!! ❤️🤍 A huge thank you to the coaching staff at Alabama for making me feel like this was home! Another thank you to the coaches at Dynamo, my family, and my friends for helping me get to where I am today!!! I could not have done it without you! Roll Tide!!! 🐘

Though Jones still has a year and a half of training before she arrives on campus, she already boasts SEC Championship scoring potential. Her best times in the 200 freestyle and butterfly would have scored in the “C” finals at last year’s championship meet. Her 100 butterfly time would have finished 16th overall in the “B” finals.

At the Georgia 7A State Championships, Jones claimed gold in the 100 butterfly and second in the 200 freestyle. Those were her personal best times as well.

Jones will continue her athletic career under head coach Margo Geer, who is in her first year as head coach of the Crimson Tide. The former USA National Team member competed at last year’s Olympic Trials. In her collegiate career, Geer was a 27-time All-American and three-time NCAA Champion at the University of Arizona. To date, she has led the men’s and women’s teams to an undefeated dual meet record thus far, most recently with wins over LSU. At the Tennessee Invitational in late November, both teams finished second behind the hosts Tennessee.

She will join Gaby Van Brunt, Sydney Blackhurst, Laurel Blase, and Cadence Vincent as members of the class of 2027.

The University of Alabama is located in Tuscaloosa, Alabama. The Crimson Tide compete in the SEC Conference. Last year, they finished 4th out of 12 teams. They also had three women compete in the Olympics: Rhyan White (USA), Kalia Antoniou (Cyprus), and Diana Petkova (Bulgaria).