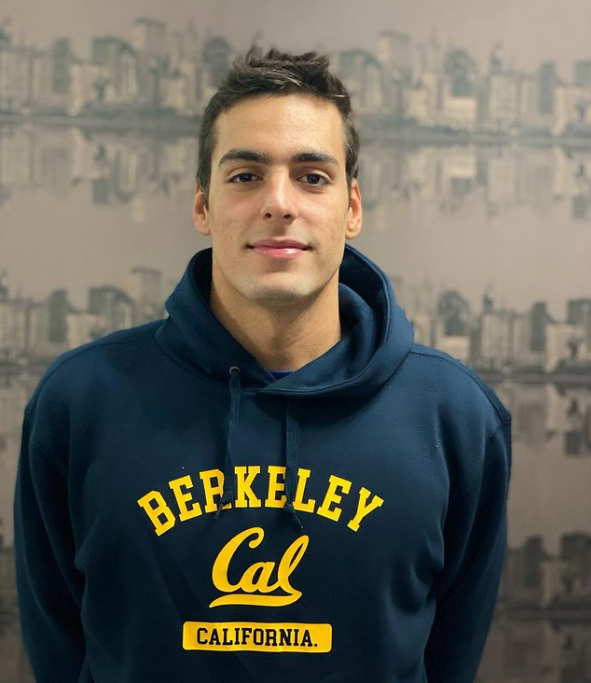 17-year old Nic Antoniou of Cyprus has committed to the University of California Berkeley for fall 2023. The Cyprus National Record Holder specializes in sprint freestyle and adds to an already speedy Golden Bears roster.

I’m honored to announce my verbal commitment to continue my swimming and academic career at the University of California Berkeley. I’m so thankful for my family, friends and coaches for supporting me along the way. I also would like to thank coaches Dave Durden and Chase Kreitler for the opportunity that was given to me to represent Cal in the following years. Go bears 🐻

Antoniou had a busy year of international competition. This summer, he competed at the Tokyo Olympics, where he swam the 50 (23.38) and 100 freestyle (50.00). He placed 45th and 40th respectively. In December, he competed in those same events at the 2021 FINA Short Course World Championships. He finished 40th overall in the 50 freestyle and 45th in the 100 freestyle.

The University of California Berkeley Golden Bears compete in the Pac-12 Conference. In early 2021, the men’s team won their fourth consecutive Pac-12 Championship meet. They finished 2nd at the 2021 NCAA Championships.

Antoniou will continue his athletic career with head coach Dave Durden. During his tenure, he has led the Golden Bears to four NCAA Championships, seven second-place finishes, and 48 NCAA Titles, and 129 Pac-12 titles. This summer, he led Team USA at the Tokyo Olympics, and he was also recently named one of CSCAA’s 100 Greatest Coaches.

He will join a Cal roster that has seen 24 swimmers hit NCAA “B” cut standards so far. He will be joined by fellow sprint freestyler Rob Alexy and versatile swimmers Keaton Jones, Roman Jones, and Samuel Quarles as members of the class of 2027.

His sister, Kalia Antoniou, is a senior at the University of Alabama. She was a 2021 NCAA Champion in the 400 freestyle relay and has earned 10 All-American honors in her career. She is also a four-time Cyprus National Record Holder in the SCM and LCM 50 and 100 freestyles.

I wish it was lol