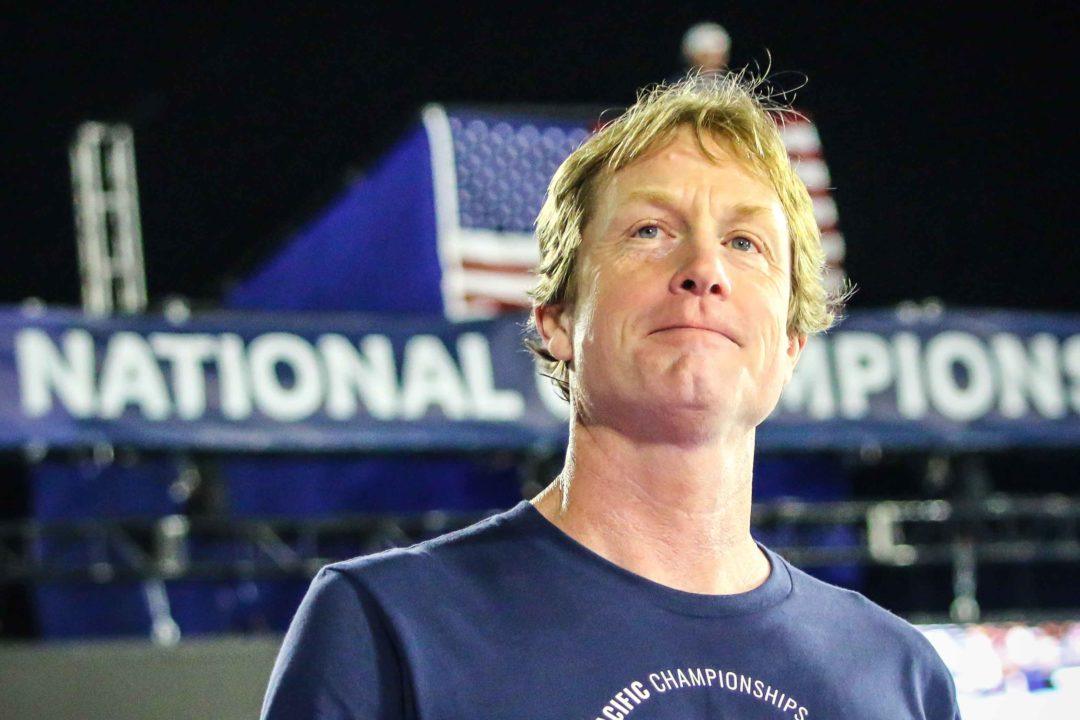 When you start counting the accomplishments of swimmers under Ray Looze's umbrella at Indiana, the results start to pile up quickly. Current photo via Jack Spitser/Spitser Photography

Editor’s note: this award is specifically given on the credit of accomplishments by athletes in senior, international, professional, and to a lesser extent collegiate, competition. That’s as differentiated from the ‘club coach of the year‘ Swammy, which is more heavily weighted to accomplishments of junior-aged swimmers. As with all of our regional coaching awards, to be eligible, a coach should be based primarily in the US, with accomplishments weighted heavily toward those of their American athletes (though not to the exclusion of US-based foreign athletes).

Ray Looze, head coach at Indiana Swim Club and Indiana University, had to drive as far as an hour to coach his swimmers in an indoor 2-lane pool while Indiana’s facilities were shut down during the coronavirus pandemic. Swimmers from the pro group including Lilly King, Annie Lazor, and Cody Miller made the trip, as documented on Miller’s YouTube channel.

King finished the ISL season ranked 2nd among all swimmers in the MVP standings and left Budapest with $254,000 of prize money. Her consistency throughout the season earned her MVP of Match 1, the 2nd MVP of 8, the 3rd MVP of Match Semifinal #2, and the 2nd MVP again of the Grand Final. Further illustrating her domination of the breaststroke races, King finished the season with a total of 102.5 jackpot points, the 3rd-highest in the league.

Zach Apple did not get to swim in the ISL post-season, though he was one of the best relay swimmers in the league in 2020 and produced the 14th-fastest 100 freestyle split in a relay in history, clocking a 45.15. Apple was the 2nd-fastest 100 freestyle performer in the ISL in the 2020 season behind only Caeleb Dressel with a 45.74 flat-start time from ISL Match #2. Training partner Blake Pieroni finished 2020 ranked 8th in the world in the 100 freestyle. Pieroni and Apple also rank 14th and 15th, respectively, in the 200 freestyle.

Unfortunately in a late developing story the award has decided to enter the transfer portal. More at eleven…

Transfers, or people quitting, at any school are a “YOU” problem, not a “COACH” (or in IU’s case, a “GOAT”) problem. In all the cases I’ve seen at Indiana, this is the case. When it doesn’t work out at any school, most of the time it involves who the athlete surrounds themself with and who they listen to. If you come to Indiana University and always keep GOAT Coach Ray Looze and his staff in your inner circle and don’t follow or listen to “false prophets”, you will get faster, gain confidence and achieve greatness inside and outside of the pool. You will also experience peace, tranquility and have clarity that most young people don’t have the opportunity to experience… Read more »

Kevin Weldon is amazing and indeed has so much wisdom when it comes to recruiting!!!

Maybe this is the year that Ray learns his athletes names and talks to them?

Ray is the ONE National/International level coach that gives unrestricted access to his program! Always makes himself available…if Coleman wanted to do a 2 week practice & pancakes video of the IU program…Ray would let him!

So what. That doesn’t mean he treats his athletes or staff well, nor does it mean he should be coach of the year.

As an IU alum that swam for Ray Looze, I am disappointed in this decision. Ray doesn’t coach Blake or Zach. Nor do I think he deserves to continually ride off of Lilly’s talent.

I don’t understand how you can apparently be the “best coach of the year” but have like 9 people transfer out of Indiana in the offseason. I wouldn’t leave somewhere with the best coach.
Also they came third at B1G, that bad with all the talent at Indiana.

Great season for the IU pro group. If something is “up” with the college program, at least the pro group had great post-quarantine showings. Oh and no dolphin kick DQs as far as I can remember.

Guerra, I feel real good for you today.

Nothing is up with the college program. IU is doing great.

You want a train wreck then jump on slick stickels bullet train to ruin in Alabama.

Then why did 11 people transfer out and there worst ever performance at B1G’s. I wouldn’t say that is great

Thank you, Braden! I was waiting for your stats before I posted on this. Some of these trolls have a philosophy of never letting the FACTS get in the way of a good narrative…

Ray outworks every other coach in America. He is super successful because he commits both time and energy into the program and expects the same from all the coaches and swimmers.

I totally agree with what you wrote. I told Ray and Kandis when they got to town to rescue and salvage our distressed and broken program in 2003, that, “Bloomington is a tiny speck on the map, but if you love Indiana University, it will love you back and take you to places and to heights that you never dreamed of going to.” Nobody embodies that statement more than GOAT Coach Ray Looze. To know the man is to love the man…

I totally agree with what you wrote. I told Ray and Kandis when they got to town to rescue and salvage our distressed and broken program in 2003, that, “Bloomington is a tiny speck on the map, but if you love Indiana University, it will love you back and take you to places and to heights that you never dreamed of going to.” Nobody embodies that statement more than GOAT Coach Ray Looze. To know the man is to love the man…

Ray DOES outwork other coaches! It was the same work ethic he had as an athlete and you are right…he DOES expect the same out of the other coaches on the staff!