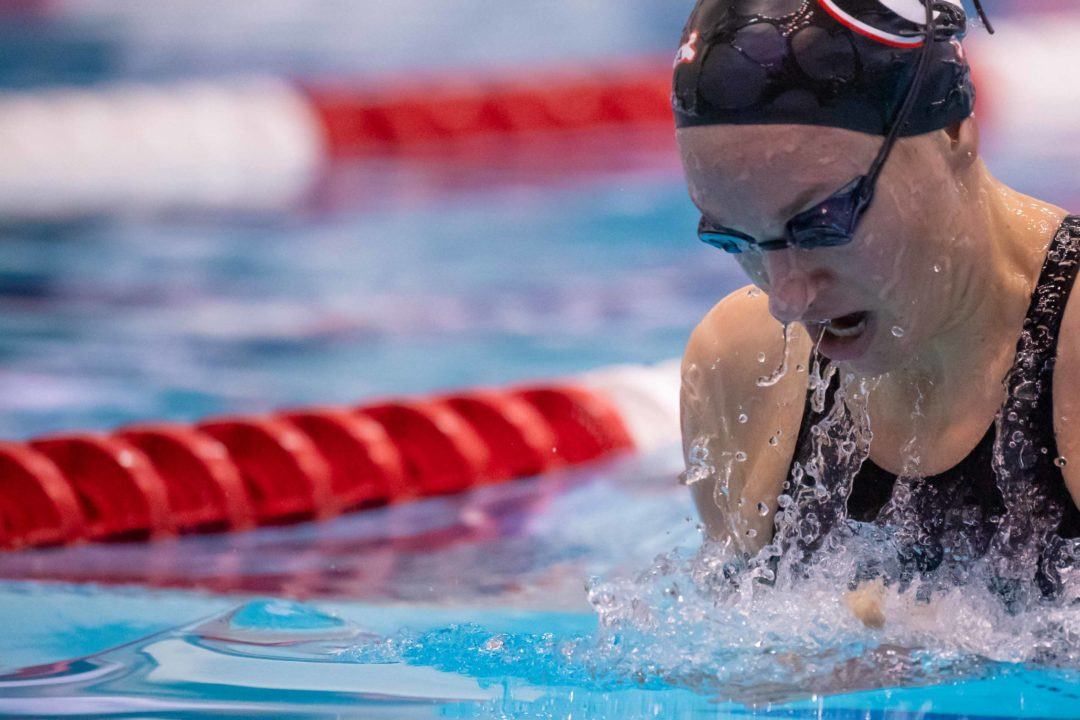 U.S. Olympian Melanie Margalis had a huge swim in the 400 IM at the 2020 Pro Swim Series in Des Moines. Margalis, a Georgia postgrad, dominated in 4:32.53. Archive photo via Mike Lewis/Ola Vista Photography

U.S. Olympian Melanie Margalis had a huge swim in the 400 IM on night 3 of the 2020 Pro Swim Series in Des Moines. Margalis, a Georgia postgrad, dominated the event in 4:32.53. She’s now the 4th fastest American woman in history in the event and the fastest currently active U.S. swimmer by far. It was a lifetime best by 3 seconds, as her former best was a 4:35.50 from 2018.

Margalis battled closely with Worlds 200 IM medalist Madisyn Cox through the front half, but pulled away on the breast leg as she outsplit Cox by nearly 4 seconds on that leg alone. Cox was 2nd in tonight’s race with a 4:38.88. Ally McHugh, who has represented the U.S. at Worlds in this event, was 3rd in 4:42.50. McHugh is now bumed to #7 on the all-time top Americans list.

The only Americans who have been faster than Margalis are Olympic medalists Katie Hoff, Maya DiRado, Elizabeth Beisel. Hoff still owns the American Record with her 4:31.12 from 2008. Margalis is about a second and a half shy of the U.S. Open Record, as well, as Katinka Hosszu, the Olympic Champion and World Record holder, set it at a 4:31.07 in 2015.

She’s not a baby anymore.

Did anyone ever say she was a baby?

She did in her post race interview. What she was alluding to was how the 400IM in particular is such a mentally (and physically) challenging race, and that her race strategy for it was to “stop being a baby” about it.

Her brother was an outstanding 400 IMer. I wonder how much of her apprehension has to do with watching how hard he worked and how short he kept coming up at Trials. Really glad she is willing to embrace this event. The US needs her!

Good for her. Well deserved.