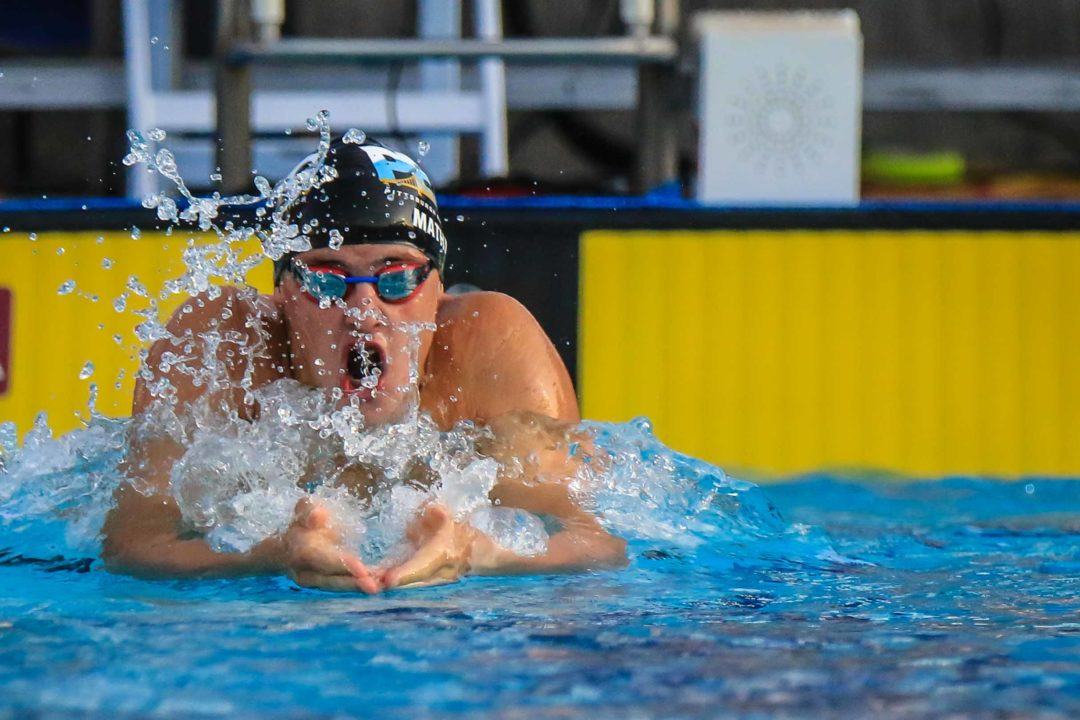 Of the four 17-18 NAG Records that were broken in 2020, only one was swum by an age-grouper; the other three performances came from 18-year-old college students David Johnston (University of Texas, 1000y free), Luca Urlando (University of Georgia, 200y fly), and Carson Foster (University of Texas, 400y IM). Matheny took just over 7/10 off his personal best time in the 200y breast at 18&U Winter Championships in Carlisle, PA to win in 1:51.35. That was .05 under the NAG mark set by Reece Whitley in 2017.

Matheny posted the top times in both the 100 breast (52.02) and 200 breast for the 18&U combined virtual championships. He also won the 100m breast and 200m breast at the U.S. Open in Richmond; those times translated to 8th and 12th, respectively, in the combined results from the nine sites.

Swimming for the University of Texas in his first outing as a Longhorn, Foster broke Andrew Seliskar’s 2015 National Age Group Record for 17-18 boys in the 400 IM (3:37.52). Foster dropped 3.1 seconds from his previous PB to etch his name in the 17-18 record book with 3:35.27. Moreover, he became the second-fastest performer of all-time in the event, trailing only Chase Kalisz whose American Record from 2017 stands at 3:33.42.

I love when standards report “slower than B” on events like 50BK and 100IM. Yes, i know why, but funny.

Not trying to bash on josh but Carson the second fastest 4imer and multiple Olympic trials and top times overall in many strokes got beat by a breast specialist? I think he got robbed but I don’t know SwimSwams criteria

Bruh I am with you. Just look at Carson’s rankings! #1 in 4 events!? He absolutely deserved this honor. All 4 mentioned are amazing swimmers but should not be penalized that 3 of 4 are in college. Many past winners were as well. It’s about what you accomplished as a 17-18 year old throughout the year.

Amazing set of swimmers to choose from on the girls side, especially when you consider that they could all end up on the Olympic team.