Reece Whitley Swims 1:48.5 in 200 Breaststroke after 8 Months Without Racing 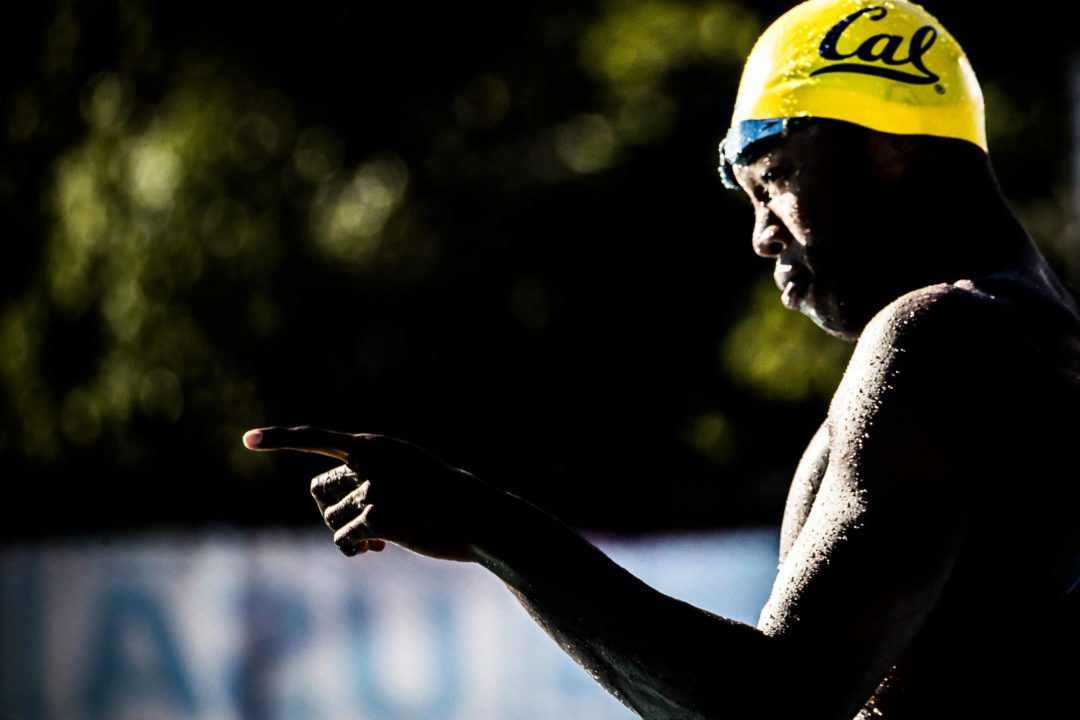 Stanford and Cal erased any concerns about rust after an 8-month racing layoff with best times and records abound on Saturday in Berkeley. Archive photo via Jack Spitser/Spitser Photography

After the women’s teams got their first crack at competition, the Cal and Stanford men renewed their rivalry on Saturday afternoon at the Cal pool.

While many of the Stanford men entered 2 races each at the meet, the Cal men each swam only a single event, leaving the meet feeling more lopsided in results than it actually was.

The highlight of the day was a 1:48.53 in the 200 yard breaststroke from Cal junior Reece Whitley. That swim, which is a lifetime best for him, is a best time for him by 1.3 seconds and is the 3rd-fastest swim in history.

Only former Texas Longhorn swimmer Will Licon has been faster in the event. That means Whitley breaks both Andrew Seliskar’s Cal school record of 1:48.70 and Kevin Cordes’ Pac-12 Record of 1:48.66.

Whitley’s last sanctioned swims came in March at the Pac-12 Championships, where he was just 1:52.52 in the 200 breaststroke. That year’s NCAA Championship meet was eventually canceled due to the burgeoning coronavirus pandemic.

The meet was loaded with fast times. That includes an 18.97 in the 50 free from the defending NCAA Champion Ryan Hoffer. That jumps Texas’ Daniel Krueger, who swam 19.16 earlier this season, as the best time in the country this season.

His freshman teammate Bjorn Seeliger from Sweden established himself as a strong second for Cal with a 19.23. With the graduation of Pawel Sendyk at the end of last season, that will be an important role for Seeliger to fill for the defending NCAA Champions from Cal. His best time coming out of high school was 45.93 done back in 2018.

Destin Lasco also had a huge debut for the Cal men. He won the 100 back in 45.21, which already climbs him to 4th all-time in program history behind only Ryan Murphy, Daniel Carr, and Tom Shields. That time by Lasco would have been the 12th-best swim in the NCAA last season.

Both schools, under strict coronavirus control protocols, have been working together to try to make this meet happen, and will attempt to put together more meets throughout the season. But, with opportunities to chase cuts for a possible NCAA Championship meet in the spring limited, it’s not a surprise that both teams went after this meet pretty hard.

The highlight of the meet for the Stanford men was also a debut in the form of a 1:34.19 win in the 200 free for freshman Luke Maurer. That time would have made him the Cardinals’ #2 in that event last season.

Stanford’s top 200 freestyler who didn’t exhaust his eligibility at the end of last season, Jack Levant, was absent from the meet. He was one of 3 individual NCAA qualifiers from last season who should have returned this season, but who didn’t race on Saturday, along with Stanford senior Brennan Pastorek, and Cal junior Hugo Gonzalez.

Maurer also won the 100 free in 43.60, which cuts three-tenths of a second off his best time. He was part of the 2nd-ranked recruiting class in the country. Even with Andrei Minakov, the World Championship silver medalist from last year, deferring his enrollment until next fall amid the coronavirus pandemic, the Cardinal still showed off one of the top classes in the country on Saturday.

I see Reece is still working that illegal extra dolphin kick like a charm. Ain’t competing if ya ain’t cheating

Bears looking like they’re doing some work in Berkeley! Keep it up guys!

He maturing, he knows his strength now.
Watch out for him.

Did Nathan Adrian swim at CAL today? Seems like not part of the dual meet. Just wonder if there is any news on the pro group swims.

Did he do his illegal turn?

Breaststrokers are allowed to do a dolphin kick on the last stroke into the wall.

Makes sense for 6’8″ whitley who has extra trouble timing his turns in the bathtub.

Correction: you are not required to do a breaststroke kick going into the walls. Many swimmers will undulate their body with their stroke and are not DQed for it.

I can’t even swim that freestyle

Can’t wait to see what the stanford guys can do fully rested :DDDD