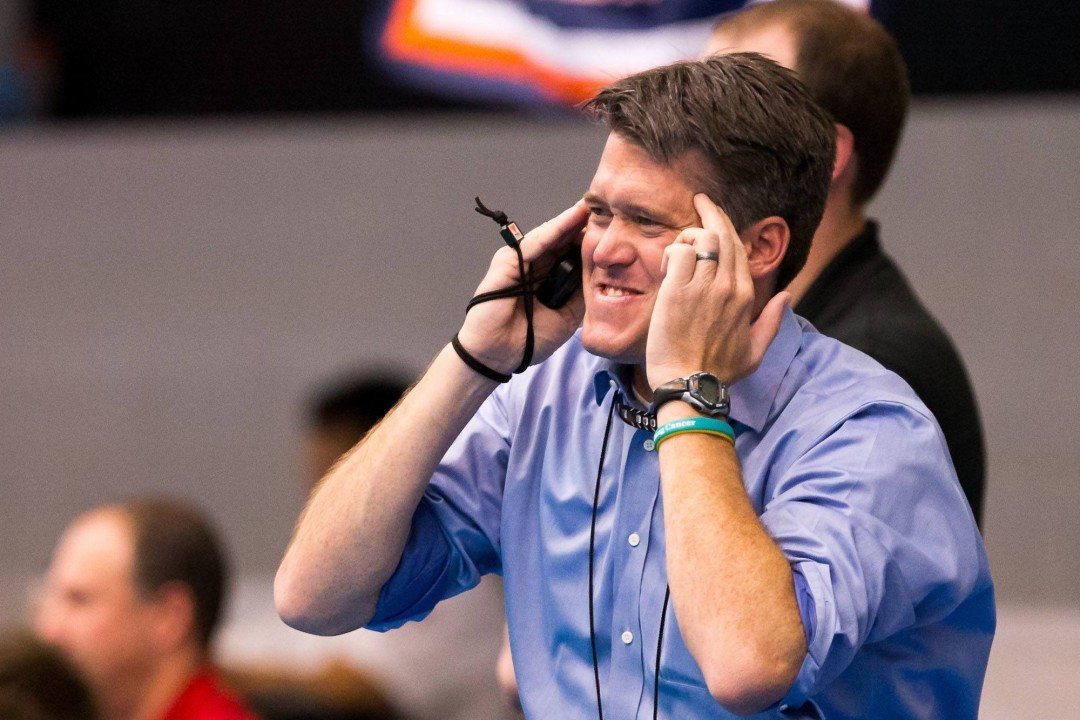 fter finishing second at the men's 2016 NCAA Championships, Durden put five swimmers on the American men's Olympic team, all of which went on to make an Olympic final. Archive photo via Tim Binning/TheSwimPictures.com

The following are the 2016 Swammy Award recipients for International Coaches of the Year:

Dave Durden is the head coach of the men’s team at Cal where plenty of American Olympians trained leading up to the 2016 Olympic Games. After finishing second at the men’s 2016 NCAA Championships, Durden put five swimmers on the men’s team, all of which went on to make an Olympic final. The Cal men brought home a total of five individual medals from the Olympic Games. Ryan Murphy won both the 100 and 200m backstrokes, Josh Prenot was second in the 200m breaststroke, and Nathan Adrian finished third in both the 50 and 100m freestyles. Additionally, Adrian was part of the winning men’s 4x100m freestyle relay and 4x100m medley relay. Murphy was on the 4x100m medley relay as well, taking down Aaron Peirsol’s suited world record from 2009 in the process.

Ben Titley was named the head coach of the Canadian Olympic team this past summer in Rio and his swimmers were highly responsible for Canada exceeding expectations. He worked with a top contingent of Canadian athletes at the high-performance centre leading up to the Games. Olympic medallists Sandrine Mainville, Chantal van Landeghem, and Michelle Williams, who all contributed to Canada’s 4x100m freestyle relay bronze, trained with Titley for a few years leading up to the games. Penny Oleksiak joined Titley at the start of the 2015-16 season. She went on to win four medals for Canada including a gold medal in the 100m freestyle and a silver in the 100m butterfly. Audrey Lacroix qualified for the semifinal of the 200m butterfly under Titley’s leadership. Given Canada’s success at these Games, Titley was a large part of producing a wealth of talent largely responsible for the outbreak of success in Rio.

Norimasa Hirai was the head coach of the Japanese squad at the Rio Olympics and serves as the current coach of 400m IM Olympic champion Kosuke Hagino. Hagino was arguably one of the top men’s multi-event swimmers at the 2016 Olympic Games, winning gold in the 400m IM, silver in the 200m IM, and bronze in the 4x200m freestyle relay. In the 400m IM Hagino broke the Asian record. Along with his three medals, Hagino was seventh in the 200m freestyle

Melanie Marshall is best known for her success as a former athlete, but has now made waves as the head coach of 100m breaststroke Olympic champion Adam Peaty. Marshall is the head coach at the City of Derby Swimming Club in Britain where Peaty trained and prepared for the Olympic Games. While there, he went on to obliterate the world record in the 100m breaststroke twice in order to win gold with a time of 57.13. That time stands as being over a second faster than any other individual in the history of the sport. On top of that, Peaty split a huge 56.59 on the 4x100m medley relay in order to push the British team to finish second behind the Americans and ahead of the Australians.

Stefano Morini is the Italian coach who managed to coach both Gregorio Paltrinieri and Gabriele Detti to Olympic medals this past summer in Rio. Paltrinieri won the 1500m freestyle with Detti touching in for the bronze, putting both Italians on the podium in a first-ever experience for the nation. Detti also stepped things up in the 400m freestyle in order to take home the bronze medal. Paltrinieri and Detti were the only two Italians to medal in the pool this summer in Rio.

While it appeared that Australia largely underperformed this year in international competition, one swimmer who was on fire was Kyle Chalmers. The 18-year-old trains with Peter Bishop at the Marion Swimming Club and went on to win the 100m freestyle in world junior record timing in Rio. Chalmers was also a staple part of the bronze medal winning 4x100m freestyle and 4x100m medley relays for the Aussies.

Mark Bernardino works as the Associate Head Coach at the Univeristy of South Carolina under McGee Moody. Bernardino works with the distance group for the Gamecocks, which included Egyptian swimmer Ahmed Akram. Akram finished 11th at the 2016 Olympic Games and 27th in the 400m freestyle.

Bernardino has also previously coached Marwan El-Kamash, though el-Kamash has now transferred out to Indiana. That means as Egypt’s swimming star has risen over the past few years, Bernardino has worked with two of the nation’s five male Olympians who accounted for four of Egypt’s 6 Olympic swims in the pool on the men’s side.

Swim Swam – maybe you could write some individual articles or interviews with some of these top international coaches.

Like the sport of swimming itself, swim coaching takes a lot of skill and dedication.

The best swim coaches are some of the most admirable people you will ever meet.

Even after you retire from swimming, the coaches live on in the hearts and minds of their swimmers.

Kudos to their assistants…..especially Yuri!

Bernadine is an amazing coach. Heck he even looks a little like Omar Sharif the actor!!

Peaty is his own country:)

Scrolling through, I found the contract between, “US…Canada…Asia” to be a bit jarring, hahah.

*Contrast. I know how spelling works.