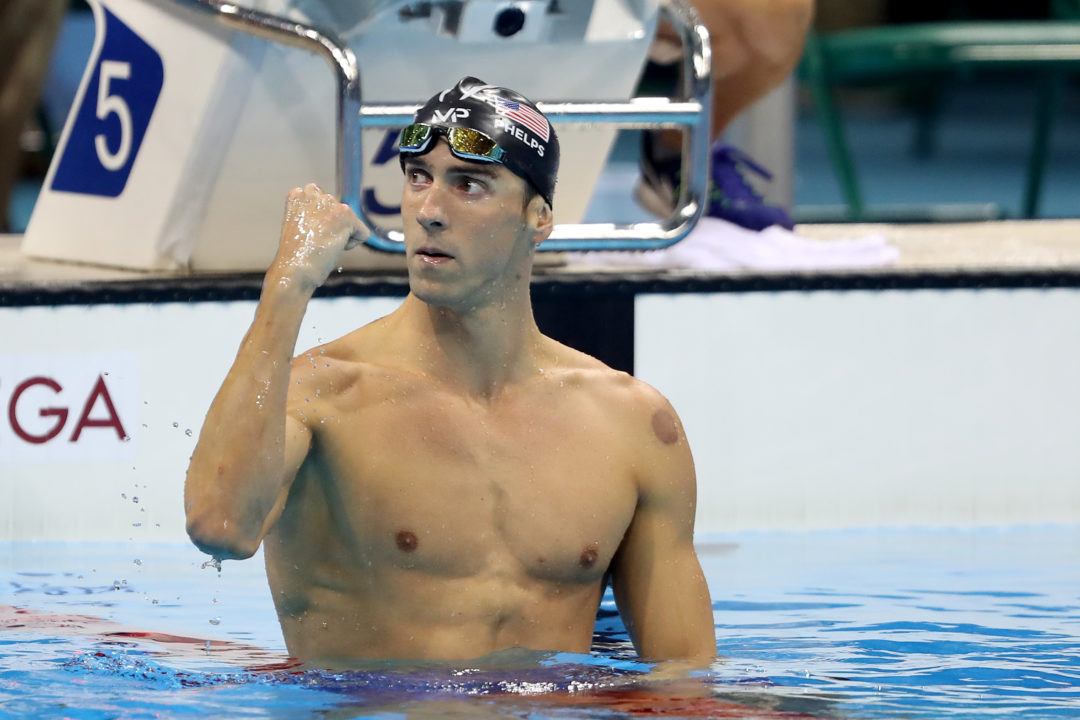 The first things many of us think of when we hear the name Michael Phelps are the records he has broken or the medals he has won. But Phelps' legacy is also encapsulated in the individuals he inspired to pursue greatness. Archive photo via Satiro Sodre/SS Press

The first things that many of us in the swimming world think of when we hear the name Michael Phelps are his legendary 8 gold medals in Beijing, his World Record swims, or his storied 28 Olympic medals. But Phelps’ legacy is captured not only through his own accomplishments. It’s encapsulated in the individuals he has inspired to pursue greatness in the pool. This was never more apparent than it was at the 2016 Rio Olympics.

Phelps and Schooling in 2008 (photo: May Yim Schooling)

In 2008, Phelps met 13-year-old Joseph Schooling, a Singaporean butterflier who idolized him and dreamed of one day winning Olympic gold for his country. Inspired by Phelps, Schooling pursued that goal as he grew up, getting better and better until he found himself competing at the same meets as his idol. Eventually, they found themselves competing against each other in the Olympic final of the 100 fly. Schooling broke through, winning gold and breaking Phelps’ Olympic Record in the 100 fly, while Phelps was a part of a 3-way tie for silver with long-time rivals Chad Le Clos and Laszlo Cseh.

Phelps’ impact on swimming is also expressed through the attention and innovation he has brought to the sport. The audiences he’s drawn have led to sold out Arena Pro Swim Series meets and an increase in televised swim meets. In his partnership with Aqua Sphere, he’s released his own “MP” line, which was developed with the technical input and product testing of Phelps and Coach Bob Bowman. Phelps is now able to market his MP brand competitive swimwear and training gear around the world.

When he turned pro at age 16, Phelps made it clear that one of his goals was to change the sport of swimming. With a legacy that includes 23 Olympic gold medals, Phelps has certainly changed the sport for the better. In his Rio Olympic swan song, Phelps won 6 medals, making him the most-decorated Olympian of all time with 28 total medals upon his retirement at the end of the Games. He’s not only the greatest Olympic swimmer of all time in terms of awards and accolades, but also in his contributions to expanding the swimming world.

A legend.
Swimming will not be the same without MP anymore.
We’ll never see again such a natural talent with such a mental of winner.
Congrats champion. And congrats to coach Bowman too.
MP forever.

Bobo, don’t you see a 50/50 chance of Mike coming back? I mean, why is he still working out in the pool? Maybe because just in case he changes his mind he would be more prepared to come back and keep that muscle memory.

Hi Lauren, good article. Should the headline not read Male Swimmer of the Year, leaving out the US part? Honorable mentions include two non-American greats. Thank you.

Hey Mike! I didn’t see U.S. in the title when I posted it. I did do the U.S. male swimmer of the year, and Phelps also won that. So maybe you saw that one earlier? Either way, I made sure it’s correct now. Thanks!

I think he means the headline not the title.

I see what you mean now. Fixed it!

I didn’t write the Asian Swimmer of the Year article, but I’m sure whoever did that one had reasons for choosing Hagino relative to Asia. In this case, we considered swimmers who had an impact on the sport as a whole and narrowed it down to these choices.

Yeah I get he criteria is different and all no worries, just pointing it out. I also liked how for honorable mention you picked the more dominant swimmers in one event (peaty 100 breast, schooling 100 fly) over the more versatile yet less dominant swimmers (hagino, yang, le clos). I’ve always thought 1 great event>several good events

Probably because the Asian swimmer of the year award doesn’t take NCAA performances into consideration while this award does. Makes sense to me.