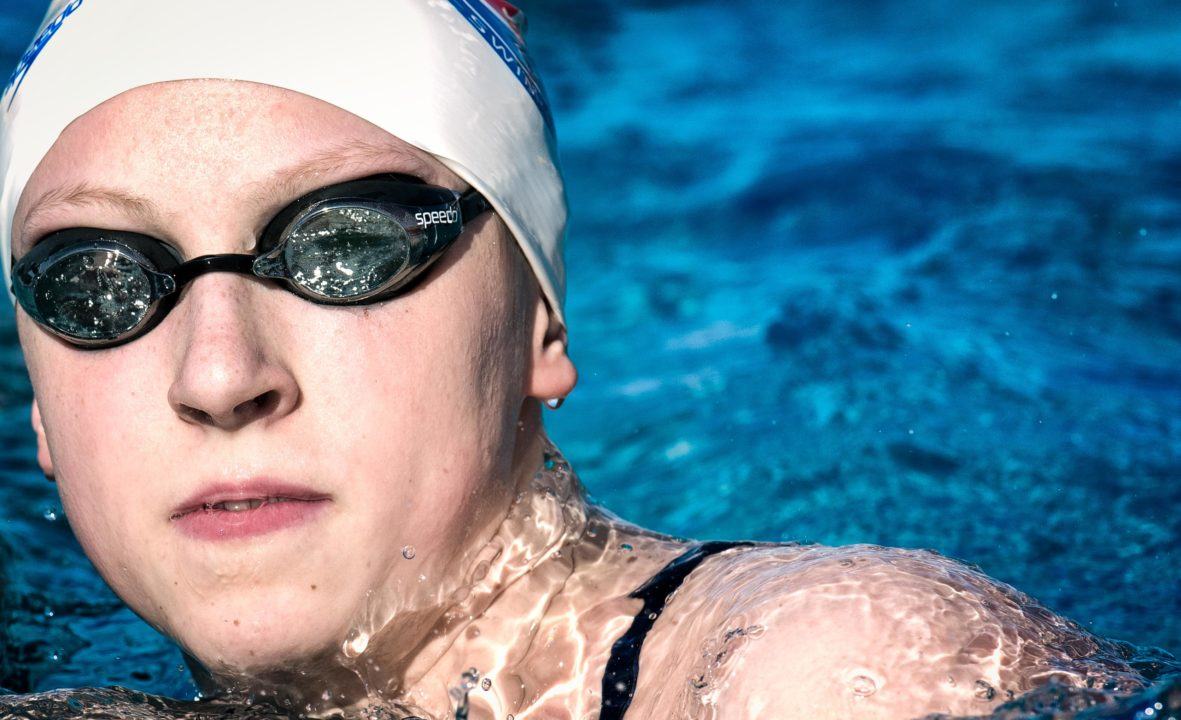 Though Katie Ledecky has been an Olympic gold medalist since she won the 800 free at age 15 in 2012, the teenage distance phenom truly left made her mark on the Olympic stage in 2016. Archive photo via Mike Lewis/Ola Vista Photography

Though Katie Ledecky has been an Olympic gold medalist since she won the 800 free at age 15 in 2012, the teenage distance phenom truly left made her mark on the Olympic stage in 2016. At just 19 years old, Ledecky returned to compete in the Rio Games, playing a much bigger role this time around. She represented Team USA in the 200 free, 400 free, 800 free, 400 free relay, and 800 free relay. At the conclusion of the Games, she went home with 4 gold medals and 1 silver medal. Individually, she was undefeated in Rio, having shattered World Records in the 400 and 800 freestyles.

The race for the Female Swimmer of the Year Swammy Award was a close one when we considered a certain iron lady, but Ledecky took the honors after we considered her recent yards performances in 2016. Despite her success on the international stage, Ledecky has decided not to turn pro. She’s currently swimming as a freshman at Stanford University, where she’s already had a huge impact for the Cardinal in the NCAA. It didn’t take long for Ledecky to start crushing records. She first did so in Stanford’s dual meet against Texas, taking down the NCAA Record in the 1000 free. She then went on to set NCAA Records in the 500 free and 1650 free at the Ohio State Invite in November.

FINA selected Katinka Hosszu as their Swimmer of the Year – our selection of Ledecky isn’t so much a disagreement as a difference in criteria. FINA doesn’t take into account yards swimming, which evens the playing field some between the two. Some of Ledecky’s best performances have come in yards, so factoring those back in makes her a solid front-runner for this award.

Guessing not factoring in yards AND Hosszu’s performance at the SCM WCs had a big part in her winning FINA’s award.

Fina announced Swimmer of the year before the SC WCs, it is more about individual medals at Rio and WR is not a factor.

FINA announced the awards after the World Cup and I’m sure Hosszu got far more orld Cup points than she did Olympic points.

Hosszu>Ledecky in 2016. At the Olympics she won 3 individual gold and 1 silver compared to Ledecky’s 3 gold. One of the only people ever to win Olympic gold in a 100, 200, and 400 (Hosszu, Phelps, and Egerszeki are the only ones that come to mind). Also she won the World Cup and won 7 individual golds at sc worlds.

Good point, but another factor to consider would be quality. Hosszu had an outstanding 400 IM (WR), a surprising 100 back, and then was slightly underwhelming in the 200s (all of this is just for Rio, cuz that’s what matters the most). Ledecky set WRs in the 400/800 free, and didn’t really have any underwhelming races in Rio.

No one had started yet, but I’m just gonna bring up something.

I’m curious why so many people said would like to see Ledecky go after 400IM.
I understand she has a lot of potential at that event, but what about 200 free?
To me she seems very proud of being a freestyler, I wonder if that record is in her mind or not…
To do that she needs speed, I don’t think training for back and breast will help her achieve it.
In my opinion, succeed a Fede’s record will be much cooler than to beat Hosszu.

Can not be more agree with your statement. Should she manage to swim under 1:53 and to be with that a World Record Holder from 200 through 1500 it would much more monumental task than to win some meet with unclear quality of competition in the weirdest race as 400 individual medley. It makes sense if teams compete in medley relay where each leg is represented with the strongest member of the team in each discipline. In contrast IMers are not the strongest in anything. In the best case scenario they have one or two legs where they are just good. If Katie Ledecky wins IM competition it would be mostly because she is so dominant in freestyle and isn’t… Read more »

Swim at mediocre level different strokes?!?
The best Imers are often swimming genius, capable to sum up different swimming skills, great in transitions from a style to another, efficient and “easy” in every style.
There is an (obvious) swimming versatility and is in the individual medley races.

I won’t consider Lochte or Hosszu as a genius, I think they are hard workers.
The only genius at IM, well, we all know who he is. lol
You brought up a good point, IMer need to be so good at transitions and all 4 strokes, they need to train for so many things.
And that’s what I want to say, if Ledecky trained for IM, I’m pretty sure it will affected her other events somehow.
The time for training IM, muscle build up like Hosszu, I doubt she can get closer to Fede’s record at that circumstance.
I saw a couple times Bobo brought up said he liked to see Ledecky trains for 400IM,… Read more »

Of cause it is all a matter of taste. I have never consider decathlon athletes the most versatile or genius. But it all depends on the angle of view. One can consider 200m free distance in swimming as consolation race for those poor things who are not able to succeed as sprinters at 50 and 100 and are getting quickly out of breath at 400 and longer distances. It is mostly true. But when I am thinking about Federica Pellegrini and her 200 performances I cannot think of her other than genius.

Absolutely deserved. Ledecky has been overlooked for so many awards this year. Clearly it’s difficult for the wider sporting community to appreciate just how much she’s moving the sport on.

G.I.N.A
In the spirit of New Year Eve and new resolutions can you please finally shed some light on the mystery of absence the dot after character “A” in your name.
😀
Happy New Year !

The A is a rating for being an exemplary internet commentator on all things & all around terrific person. Yes there should be an + also .

Hi Lauren, good article, good follow-up discussion. Question: should the title not omit the “U.S.” from the heading? After all, Sarah & Katinka are honorable mentions.

Hey Mike! I’m not sure if there was some confusion between this headline and the U.S. Swimmer of the Year article or if I somehow messed up and put U.S. in both. Either way, it looks like it’s been fixed. Thanks!

Can you imagine how the world record at 800 could look like should it be the first race of the meet, but not to come after two 52 splits at 100, jaw-dropping world record at 400, exhausting duel with Sjostrom with 1:53 win and saving American gold at 4×200 relay with the 1:53 split. Since Katie has nothing to do with the “iron lady” myth she must get tired after 5 days of such extreme exercises as any human being. So I think we could possibly witness the 8:01.
Should I be in the position to advise her I would suggest her to forget about world records at big meets with all its racing stresses and doubles and to… Read more »

A legend.
Watching her train every day must be an insane thing.
I’m pretty sure Philippe Lucas would dream of training her. She seems to be a perfect student who always does what her coach wants.
Has she peaked in Rio or will she stay at the same level at least until Tokyo 2020? It must be tough to stay motivated after what she did since 2012. But she still have a few challenges ahead of her. Either breaking the 200 free world record. Very hard but not impossible unlike the men’s record. Or playing with Hosszu in the 400 IM.
Congrats to KL and her different coaches.
She has still not lost an individual… Read more »