From Elite Swimmer To Beer Craftsman 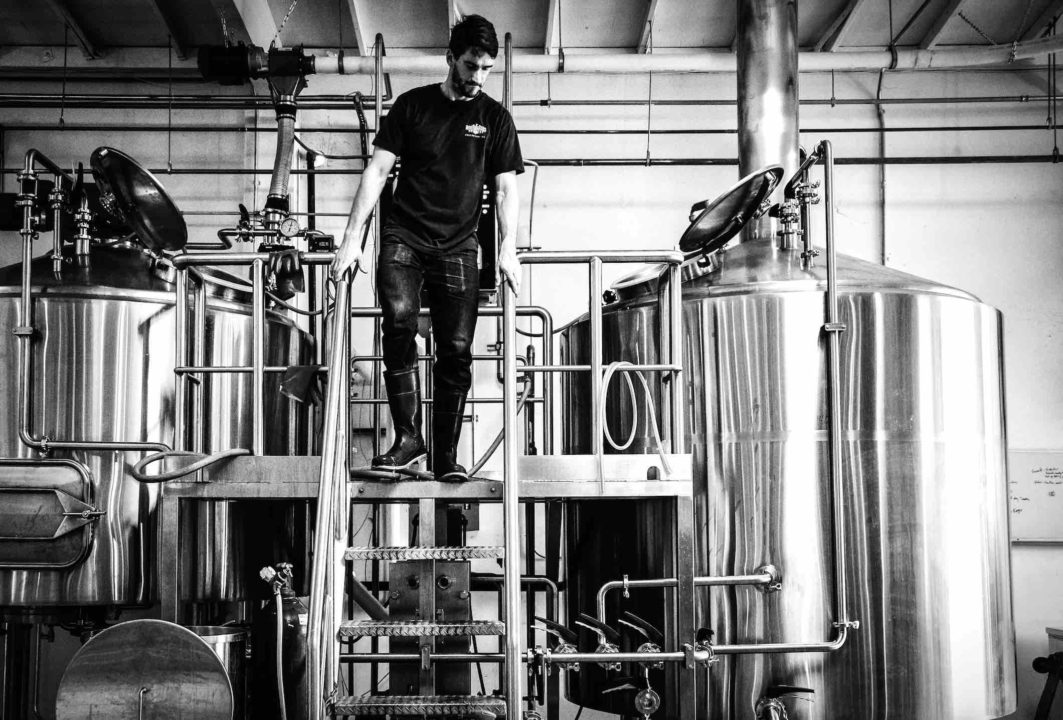 Robert Margalis, a two-time Pan American champion, has traded in his suit to become the head brewer at Bootlegger’s Brewery in Fullerton, California. Archive photo via Allysn Reginaldo

Robert Margalis is a former USA Swimming National Team member with international hardware to his name, but these days his mind is focused on carbonated and fermented water rather than the chlorinated water that used to dominate his life. While the vocation has changed, the scene has shifted very little from his life perfecting strokes in Fullerton, California’s pools. He now spends his days at the nearby Bootlegger’s Brewery where he holds the position of head brewer.

Margalis works tirelessly to develop new beer recipes, and is fully responsible for every beer that leaves the brewery into the hands of the customers. And yet, just four years ago he was training less than a mile down the street at the Janet Evans Swim Complex for the 2012 Olympic Trials. Since then Margalis has submerged himself in a completely different life, trading water for beer.

Margalis lives his life in four-year segments. From 2004 to 2008, he trained for the U.S. Olympic Trials, where he ultimately finished third in the 400 IM – one spot away from a place on the team. Down, but not out for the count, Margalis spent the next four years training for the 2012 trials. When he didn’t make the team in 2012, he hung up his goggles for good and embarked on a new four-year plan, which brought him to the position he’s in now.

“After Olympic Trials in 2012 I decided to pursue some home brewing,” said Margalis. “I didn’t have a job at the time and I didn’t really know for sure what I was going to wind up doing, so I just hung around, went to the pool, and just kind of swam recreationally, and got all kinds of home brew equipment.”

Margalis quickly realized that he enjoyed home brewing craft beer, and was in need of a job. “I went to the local brewery that was near where I was training in Fullerton and I just asked the owner if there was anything available even for a volunteer opportunity.”

Margalis began volunteering for a few hours a day two to three days a week. Primarily, he worked on the bottling line, “all the while trying to learn as much as I could.” Margalis’ drive to move up the ladder in the brewery led him to a position cleaning kegs in November of 2012. While it was not the most glamorous job, it was a job nonetheless.

Cleaning kegs took up the majority of Margalis’ day in the last few months of 2012. He would pull orders for distributors, load the trucks, and clean the kegs. While the tedious tasks would do much less than motivate the average man, Margalis stuck with it, setting his sights on more desirable positions in the brewery. “I would talk to my co-workers who were in positions that I would rather be in,” said Margalis. “I would learn from them along the way.”

Margalis managed to tough out the nitty-gritty work and it wasn’t easy. The condition that the kegs come back to the brewery in is not pleasant. They’re often covered with kitchen scraps and other filth that doesn’t add any glamour to the position.

“When you’re cleaning 100 to 200 kegs a day for nine months to a year straight it can be pretty disheartening after a while. [Especially] when you see people doing things that you would rather be doing in the brewery,” said Margalis.

The mental toughness that was required when he swam allowed him to push through the monotony of the tasks at hand while he continued to set his sites on a better position such as a cellerman, a brewer, and ultimately the head brewer.

“It really helped me to have gone through a whole life of swimming because you grind it out for a year, and then you swim fast.”

Just like in swimming, Margalis ground things out for roughly a year in order to reap the rewards. He was promoted to the position of cellerman, where he worked more closely with the beer in the brewery. Margalis was a bigger part of the process, being involved in the fermentation, tank readings, quality control tests, and taking part in pretty much every aspect of what happens when the brewers are done with the beer until it gets packaged.

Reaching the top of the ladder, Margalis still wanted to move up, but unlike swimming, there wasn’t a clear-cut image of what was needed to continue his improvement. “Swimming is very black and white,” said Margalis. “You do a best time, you’re happy, you write it down, you see how fast you went. I had never been in a job besides being a swimmer so it was a little bit different to not necessarily have a black and white picture, ‘OK so I’m moving up but what do I do now?’”

Only a few short months after being promoted to a cellerman, Margalis became a brewer. In the summer of 2015 he moved onto lead brewer, not only taking part in the creation of recipes and supporting the head brewer’s ideas, but managing much of what went on in the brewery. With his work speaking for itself, Margalis was promoted to head brewer in January of 2016, where he now works designing new products for market every week and a half.

At the Los Angeles International Beer Competition in April, Margalis was able to add another medal to his already impressive palette of eight international medals from his days representing the United States. His beer “Fuzzy Ninja Armadillo” earned a silver medal in the American-Style Black Ale category.

The four-year cycles that have taken up much of Margalis’ life have seemed to be a metaphor for the aftermath of his swimming career. The daily grind, the dedication, the focus, have all been a factor in the four-year cycle between his retirement from swimming in 2012 and his current position as head brewer.

“It’s been a learning process. I’ve learned a whole lot about adaptation,” said Margalis. “Generally people will say that in a brewery whatever can go wrong will go wrong. Sometimes in swimming you may go to a swim meet and the pool’s too cold or it’s kind of crummy outside. Sometimes in a brewery you get in these situations.”

With swimming in his past and his world now encompassed in the creation of beer, Margalis will continue to attempt to make his name known in the craft beer market moving forward into the next quad.

He trained so hard and was so versatile. Goodness. The Guy could do 8-10 events at nationals and be competitive in finals in all of them. Really unfortunate he was the same age as Phelps and lochte.

Should definitely be on the list of “top American swimmers to not make the Olympics”, with Bal, Marshall, DeScenza, McGregory, Nolan, etc.

I love a good black ale too, so he seems to have good taste!

Anyone being a IM/Back/Fly specialist from 2000-2016 was just unfortunate in America.

Nice! As someone who has been in the craft beer industry for 7 years myself, it’s awesome to see another swimmer doing what he loves after swimming. I’ll have to go grab a bottle of Bootlegger’s Knuckle Sandwich IPA from the store sometime soon.

Neat story! Sounds like a fun job. Glad he found something to enjoy for a long while.