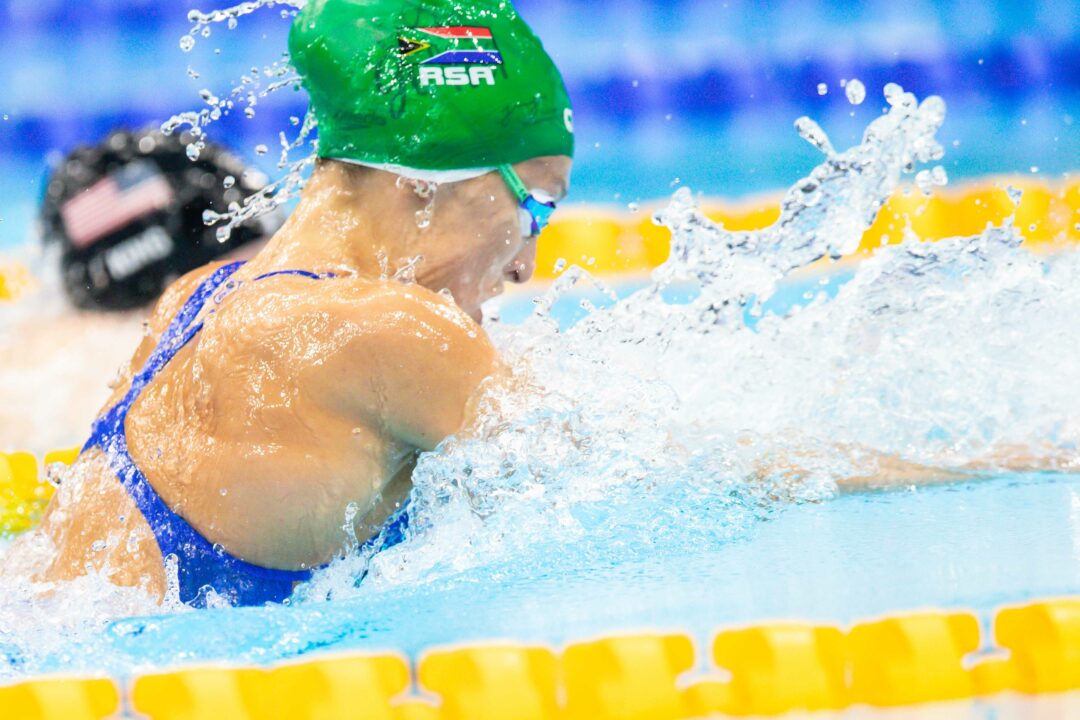 Tatjana Schoenmaker made our work very easy this year in terms of determining the winner of the 2021 African Female Swimmer of the Year. If you’re reading this article, you likely know who Schoenmaker is and what she did at the Tokyo 2020 Olympic Games, but let’s break it down swim-by-swim to showcase how she masterfully pulled off one of the best pairs of swims in 2021.

Schoenmaker had some of the quickest entry times heading into the Tokyo 2020 Games, but was set to go up against the likes of defending 100 breaststroke champion Lilly King, her teammates Annie Lazor and Lydia Jacoby, and a host of worthy competitors such as Molly Renshaw, Evgeniia Chikunova, Yuliya Efimova, Sophie Hansson, and Benedetta Pilato.

The first race that Schoenmaker swam at the Games was the 100 breaststroke prelims, which marked the beginning of what would be an electric six-swim experience. She was a 1:04.82 in the heats to shave nearly a second off her PB and African record. She also narrowly beat Lilly King‘s Olympic record from 2016 of 1:04.93. She was the fastest in the field by 0.60 seconds, followed by Jacoby’s 1:04.82 and King’s 1:05.55.

In the semi-finals of the event, Schoenmaker was a little bit slower, with a swim of 1:05.07, but still managed to lead the pack. Lilly King qualified for the final in second place with a 1:05.40, and Jacoby was third with a 1:05.72. Ultimately, Jacoby would claim the gold medal in the 100 breast with a 1:04.95, while Schoenmaker earned Olympic silver in 1:05.22. She didn’t quite top the podium in her first event, but she retained the Olympic record with that prelims swim and became the fifth-fastest woman in the history of the event.

Shortly after winning her first Olympic medal, Schoenmaker returned for the 200 breaststroke prelims. It was another African record-setting, Olympic record-setting swim as she cracked 2:20 for the first time with a 2:19.16. She had taken out Rebecca Soni‘s Olympic record from 2012 of 2:19.59 and her own continental record of 2:20.17 from earlier in the year.

It didn’t matter, however, if anyone else could dip under 2:20 in the final because Schoenmaker upped the ante and became the first-ever woman in the history of the event to swim a sub-2:19 200 breaststroke. Schoenmaker delivered a mind-boggling 2:18.95 to shave roughly a quarter of a second of Rikke Møller Pedersen’s 2013 world record. It also meant a new Olympic, African, and South African record for her and made her a double Olympic medalist and an Olympic champion.

In summary, Schoenmaker swam 6 in individual races at the Olympics, won 5 of them, came second in 1, and walked away with a silver medal, a gold medal, 2 Olympic records, 2 African records, and 1 world record. For her masterful performance at the Tokyo 2020 Games, Schoenmaker is the uncontested victor of this award.

We haven’t seen much high-level racing from Schoenmaker since the Olympics, partly due to her last-minute withdrawal from the 2021 World Short Course Swimming Championships. With only a few months to go until the 2022 World Swimming Championships, though, we all wait in anticipation to see what comes next for one of the fastest breaststrokers in history.

South Africa knows how to produce great breaststrokers. Congrats to Ms. Schoenmaker. I feared that she gave everything in prelims and semis in the 200 to end up missing the gold like in the 100 but no, she still had something in the tank, and she won the gold with a new world record. Brave gutsy great performances.

Glad to see you back Bobo! We need your insights into Agnel incident.

I think y’all may have missed but Lara Can Niekerk broke the 50m br African record.

What a brave swimmer, her 3 swims in the 200 breast prelims, semis & finals, legendary stuff.