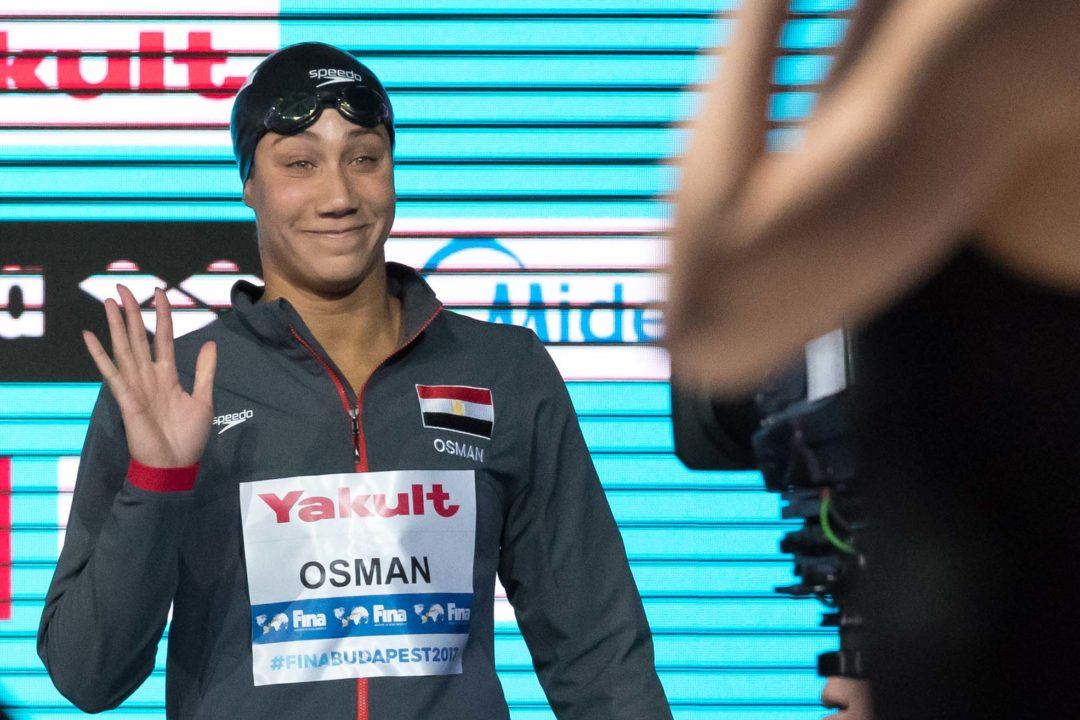 To see all of our 2017 Swammy Awards presented by TYR, click here.  2017 AFRICAN FEMALE SWIMMER OF THE YEAR:... Archive photo via Mike Lewis/Ola Vista Photography

Egyptian swimmer Farida Osman finished off her NCAA career in March with her 1st career NCAA title, winning the 100 fly in 50.05. That swim made her the 3rd-best performer in the history of the event, behind only Kelsi Worrell (49.43) and 12-time Olympic medalist Natalie Coughlin (50.01).

That was just a warmup for the start of Osman’s post-graduate professional career, which included taking a bronze in the 50 fly for Egypt’s first-ever Swimming World Championships medal. Her 25.39 broke both the National and African records in the event, as did her 9th-place 24.62 in the 50 free.

She swam 4 total races at the World Championships: taking 25th in the 100 free (55.52) and 17th in the 100 fly (58.67). Neither of those swims were lifetime bests, but with now a full season to focus on long course training (the big international meet for Egypt will be the African Swimming Championships), she should be able to hold form for a bigger event schedule.

A recent run of success has spurred along men’s swimming in Egypt – they sent 9 individual swimmers, plus all 3 relays, to Worlds and broke 7 Egyptian Records in the process. The cultural barriers for female Egyptian swimmers are much more complicated, but there is a little bit of a spark form Hania Moro – a 21-year old who swam 4:19 in the 400 and 8:53 in the 800 in Santa Clara in June. If Osman can find a way on to an Olympic podium in Tokyo, that might be enough to spark some real movement in women’s swimming in Egypt.

Osman has been named the African Female Swimmer of the Year in 4 of the 5 years that it’s been awarded. The only exception is 2014, where Karin Prinsloo won the honor.

Congrats, Farida! Super sweet person, fierce competitor, wonderful smile! I agree with Longseeker, Farida represented her University extremely well, and it was a delight watching her swim, especially when anchoring relays! All the best, Farida….

So happy for you Farida! We really miss you and appreciate how you represented Cal during your career. Hope we will see you sometime in Berkeley along with other alums.

Where does she train now?