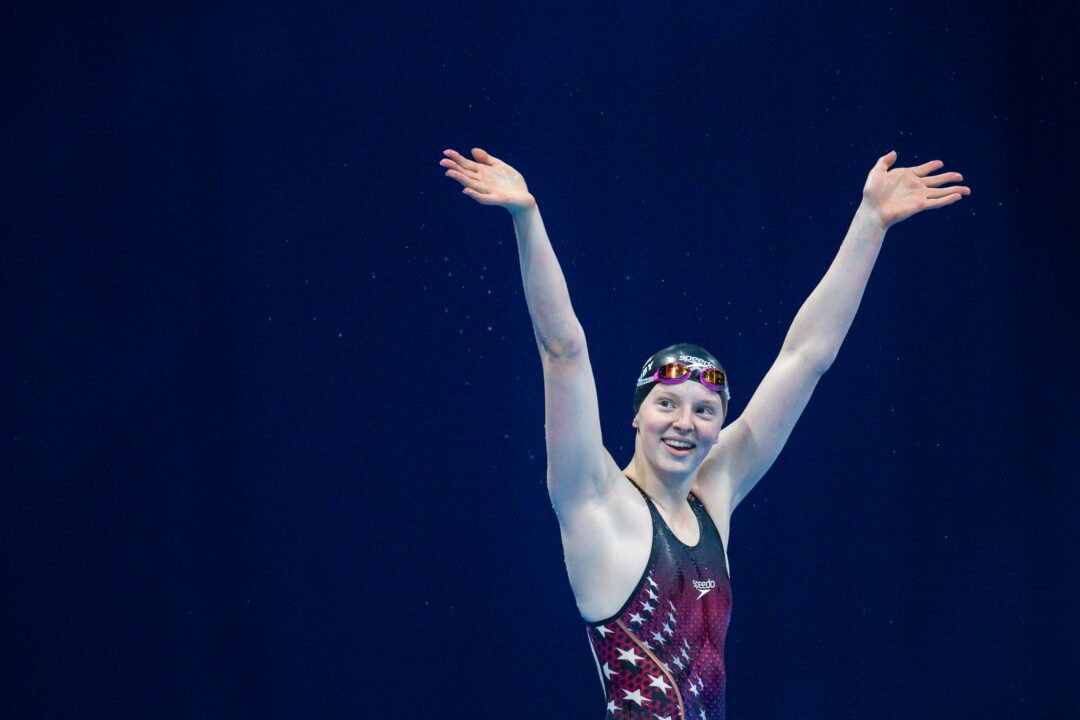 One of two juniors to earn an individual medal in Tokyo, Lydia Jacoby is this year's World Junior Female Swimmer of the Year. Archive photo via Jack Spitser/Spitser Photography

Of all the things that made Lydia Jacoby‘s 2021 an impressive year, the obvious highlight was her Olympic gold medal-winning 100 breaststroke swim of 1:04.95. The swim made her the one of two ‘juniors’, which is defined as those 17 & under for females and 18 & under for males, to land on an individual podium in Tokyo. The other was Tunisia’s Ahmed Hafnaoui who won the men’s 400 freestyle at the age of 18.

For her performance in Tokyo and the fact that she was the sole woman to medal in an individual event, Lydia Jacoby is this year’s Swammy award winner for World Junior Female Swimmer of the Year.

Entering 2021, Lydia Jacoby was not a completely unfamiliar name in the swimming community, but her first swim that drew widespread attention was in April 2021 at the Mission Viejo Pro Swim Series. She threw down a 1:06.99 long course 100 breaststroke to become the 5th fastest 17-18-year-old in American history. She improved to a 1:06.38 during finals, which made her the 14th-fastest American in the event in history.

Jacoby started things off at Trials with a 1:06.40 for 4th place overall in the prelims, followed by a PB of 1:05.71 in the semi-finals to qualify in third for the final. She was the youngest entrant in the final by roughly 7 years but managed to pull off a second-place finish of 1:05.28 to Lilly King‘s 1:04.79.

Some will remember that the unique women’s 100 breaststroke Olympic Trials final featured 9 women instead of 8 when Molly Hannis‘s semi’s DQ got overturned. That means that Jacoby defeated not 6, but 7 seasoned veterans to become one of the USA’s youngest new Olympians.

Having cleared the first hurdle en route to Olympic gold, Jacoby kept up the momentum in Tokyo with a 1:05.52 in the heats, followed by a 1:05.72 during semi-finals. She has swum her way into the Olympic final but would be up against reigning champion and world record holder King, newly minted Olympic record holder Tatjana Schoenmaker, and a host of other breaststroke stars in Yuliya Efimova, Sophie Hansson, Evgeniia Chikunova, Martina Carraro, and Mona McSharry.

It was, in the end, Jacoby’s race. After having broken 1:07 for the first time just a few months prior, Lydia Jacoby stormed to victory in a 1:04.95 to shatter her own PB and become an Olympic champion at her first-ever major international meet. The 17-year-old Alaskan had etched her name into the history books and just like that had become this year’s World Junior Female Swimmer of the Year.

Following her victory in Tokyo, Jacoby returned to swim in the final of the 4×100 medley relay and contributed to the USA’s silver medal performance along with Regan Smith, Torri Huske, and Abbey Weitzeil.

Lydia was the Cinderella story of Olympic swimming.

She swam faster at every meet and shocked the world and herself.

The Alaska watch party exploded with excitement and joy as Lydia inched into the lead down the stretch and touched first.

Typo – says Lydia Jacoby, Italy in the past winners chart

I think she deserved an honourable mention, maybe over Yiting

Can you remind me if little Mac set a wjr?

She was fourth at the Olympics at 14…missed a medal by half a second. Her ISL season showed insane versatility and speed, a wjr isnt needed to put her among the best juniors in the world.

is that a yes or a no about WJRs?

McIntosh has Ledecky, the most accomplished teenage female swimmer this century, to contend with for the WJR lmao. Just a casual 3:58 is needed.

No issues with Yiting but completely agree that McIntosh was worthy of an Honorable Mention.

Worthy of some consideration would also be O’Callaghan. Granted no individual swims, which may/may not be considered as criteria, but 3 medals including 2 golds. All of them heat swims but each of her splits would’ve seen her in the finals line-up of every other country !

Absolutely about O’Callaghan who lead off 4×200 relay in heats in Tokyo with a WJR 1:55.1. Mcintosh also 1:55 lead off, not a WJR but nearly 3 seconds faster than Woodhead’s NAG still stands from 1978.

Yep, Lydia Jacoby worthy winner, but both Summer Mcintosh & Mollie O’Callaghan were standouts. Both deserved honorable mentions.
These 2 are going to challenge Titmus & Haughty in the 200 in the coming years.

Yiting has better chance to win a world title than McIntosh next year.